Totals for the tour: Florida to Wisconsin 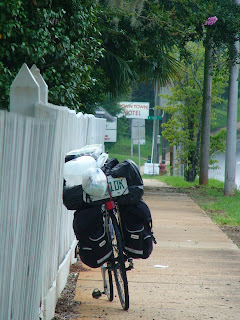 Some final totals from the past three weeks and the Florida-to-Wisconsin bicycle tour.

– 1,417 total miles, which equals an average of about 70 miles a day.
– The most miles covered in one day was 130 mi. from Bloomington, IL to about 25 miles from the Wisconsin state line.

– Three flat tires, four dog chases, and one overnight stay at a fire department in Marengo, IL.
During my final day on the road in Mukwonago the heat got to me and I laid down around 1 p.m. under an overhang outside the entrance to the local high school. Within an hour three people checked on me and one poked me with a stick, out of courtesy I suppose, to see if I was still alive.
A priest helped me find a place to stay that evening. Father Joseph Wood, dressed in full collar and black cassock, answered the door at the rectory next to St. Pius V Chapel.
“You can come in, out of the heat,” he said.
Fr. Joseph spoke as if he was visiting from another country; he had a slight lilt in his voice and somewhat of a British accent.
“I’m from Colorado,” he said dryly. Fr. Joseph was studying Latin at St. Pius; he took classes from a tutor that visited the parish on weekends.
“Since I’m not in charge I really can’t give you permission to stay in the church, but let me make a couple of calls,” he said.
Sitting alone in the front office was pleasantly cool. The room was sparsely decorated with dated orange brown chairs, a plain desk and bookshelves full of religious reading.
Fr. Joseph returned with his laptop computer and suggested he book a room for me online.
“I’d take you to the motel myself but,” he said dropping his head a bit and cocking it to one side, “how would that look?”
Fr. Joseph was a young 30-something with a wry sense of humor.
I tried desperately to decline the charitable offer, going so far as to suggest I’d even sleep on the carpeted floor of the office where we were sitting.
“You know, we normally don’t have the air conditioning on in here,” he said. “It’s just that the cleaning lady came and turned it on today and we haven’t found the courage to turn it off.”
Fr. Joseph was so humble; you felt he’d never be able to muster a harsh penance.
We chatted for about 30 minutes while he surfed the net and tapped in details for a room for the night.
He had a friend in college who made a coast-to-coast trip on a bike and was aware of the many challenges while on the road.
“Once my friend’s bike broke down and a man sold him a car for $2. They made it as far as Idaho before it finally quit; I think they got their monies worth out of that vehicle,” he said.
As Father Joseph walked me to the door he wished me well. “I’d let you stay here at the rectory, but I assume you’re head out early and, you know….  how would that look,” he said again with the head nod and grin.
It felt very much like a Bing Crosby Fr. Chuck O’Malley – Julia Roberts scenario.