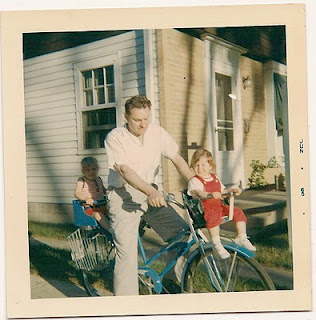 Seven days before I leave on my fundraising bicycle tour and my bike is stolen.

I’m shaking my head as I write this. It’s an old beater of a bike. A TREK, black, boy’s frame, tear in the front tire – so it wobbles a bit but it got me from here to there and I could get from story to story and Music on Main to help promote what was going on in downtown West Bend.

For years I’d take it downtown. Park by Sal’s Pizza. Meet friends. Listen to music and it would be trusty and waiting for me at the end of the night.

It used to be an old West Bend Police bike. Bought it when Russ Wanta owned Pedal Moraine.

While I was working with West Bend Police on a statement, one guy offered me his old bike he kept in his garage. “It’s a GIANT. You’ll love it,” he said.

I have another bike.

I don’t need a Go Fund Me or any money.

Figure it’s on another adventure as we speak… or in the alley. Or in the river …..

From this perspective it feels like a bit of a violation but I’m trying to take my brother-in-law’s perspective.

He’s a pastor up in Winneconne. His watch collection was stolen. He said the person who took it probably needed it more than he did.

I guess that’s the way I’ll look at this.

But, selfishly, …. if you took my bike… could you please just bring it back.

I leave in 7 days on a bicycle tour. I’ve gone on this tour the past 10 years and brought the community in tow with stories from the road.

The past five years we’ve raised money for people with Alzehiemer’s. Funding music and exercise programs at Cedar Community.

This year my 15-year-old niece Audrey and I are raising money to buy a rickshaw for the folks at The Samaritan Home – so they can have adventure on a bike too.