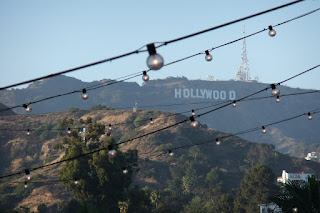 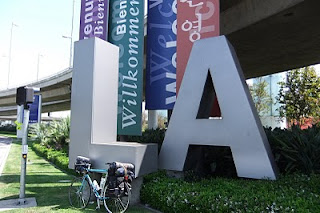 I really tried to grow my boundaries and explored spending the night at the historic Hotel Roosevelt in West Hollywood. The 300-room hotel dates to 1927, is located on the Hollywood Walk of Fame and was first to host the Academy Awards.

The hotel reportedly is haunted by Marilyn Monroe; her reflection has been seen in the poolside nightclub, Tropicana. Montgomery Clift supposedly has been heard playing a trombone on the ninth floor.
The hotel has been used in a bunch of movies and TV shows, including “Knots Landing”, “Moonlighting” and “Beverly Hills Cop II.”
Through the years, the hotel has bee remodeled and lost a ton of its’ history. It used to have a grand archway and elaborately painted ceilings. Now, it’s a boutique hotel and all the history has been covered; paintings, pictures and memorabilia have been dumped in a closet.
As much as I wanted to grow as a person, the $30-a-night Hollywood Hostel down the street on Hollywood Blvd. was more my speed. Across from the Kodak Theatre, down the block from Grauman’s Chinese Theatre…it was perfect.
With a couple flat tires in the 15 miles from LAX to West Hollywood, I sought a bicycle store and found a Hollywood cemetery called Hollywood Forever; it’s on Santa Monica Blvd.

Back in the day, it was probably amidst fields and trees and on the outskirts of town. Now, it’s an immaculate landscape of crypts, gardens, mausoleums and monuments housed behind a black wrought-iron gate across the street from Tom’s Smog & Auto Repair, Manuel’s Tires and Hollywood Discount Mufflers.

Hollywood Forever started in 1849 and was originally Hollywood Memorial Park.

Hollywood Forever Cemetery is the “final resting place to more of Hollywood’s founders and stars than anywhere else on earth.

More than 101 celebrities and notables are buried there; the most famous is Rudolph Valentino.

The Italian star, primarily cast as a “Latin Lover,” died at age 31 after an appendicitis operation became aggravated by peritonitis. Within a matter of a week Valentino fell into a coma and died.

Valentino’s funeral was held in New York. His body shipped cross country by train for a second funeral in Beverly Hills. He had no burial plans – but then a friend, June Mathis, said she could take his crypt. Unfortunately, she died – and now Mathis and Valentino lie in adjoining crypts at Hollywood Forever Cemetery.

Tough to find him without a $30 guide or GPS.

Other recognizable stars include Peter Lorre, Jayne Mansfield, Cecil B. DeMille, John Huston and Mel Blank, all of which I was unable to locate. I got lost in the maze of this wonderful cemetery. HUGE granite memorials to people whose names I couldn’t even pronounce like Dolukhanyan Vantset, Mary Laura Tedeschi and Kerop Shushianyan.

Apparently the cemetery also houses a lot of Albanians, Russians and a huge Jewish population.

Stars I did find include Tyrone Power, who was a big-deal actor in the 1950s with

I also saw a nice memorial to Hattie McDaniel; the first African-American to win an Academy Award in 1939 for

Gone With The Wind.

I also found actor Douglas Fairbanks and guitarist Johnny Ramone from the Ramones.

Hollywood Forever Cemetery is the “final resting place to more of Hollywood’s founders and stars than anywhere else on earth.”

– It seems to be human nature to

be in Hollywood and think you’ve seen a star. I went exploring this morning and thought I bicycled past author Stephen King. Then I’m like, ‘why would Stephen King be hanging out in California’s version of the Wisconsin Dells?’ I checked online and King still resides in Bangor, Maine.

– The airline saw fit to check my bicycle, for safety’s sake. Upon landing and retrieving my bicycle box I could tell it had been opened. There was a nice note from Transportation Security Administration inside that said they were “required by law” to inspect all checked baggage. Mine was among those selected for physical inspection. I hope they found that repacking a bicycle is

not the easiest thing. And they failed to do it correctly.

– Spent the night at the Hollywood Hostel on Hollywood Blvd. $30 a night, across from the

Kodak Theatre and down the street from Grauman’s Chinese Theatre. Comedian Jimmy Kimmel is performing next door and Toy Story 3 is playing at the El Capitan cinema. Adult admission is $20.

HOLLYWOOD sign in the Hollywood Hills is just outside my hostel window. It’s rather easy to spot the 45-foot letters. I asked how to bicycle to the sign and locals say it’s not really possible. For years it’s been cordoned off by gates and security. There’s a lot of graffiti in the area and officials believe the sign would be tagged if left open to the public.

– Lots of tourist attractions. Explored the shopping area around the Kodak Theatre and read the sidewalk about the ‘road to Hollywood’:

One segment read, “You’ve got to come to Hollywood,” they said.
“Movies is the third biggest business in the world. Safety razors is first, corn plasters second, and movies third.” So I went. – Cowboy star.

– West Benders are stalking me. Crazy coincidence that the day I land in LA, my friends Ric and Amy Leitheiser and family are also in LA. Through cell phone challenges and traffic issues we managed to hook up for a cold one last night on Hollywood Blvd. I love how my friends take care of me.