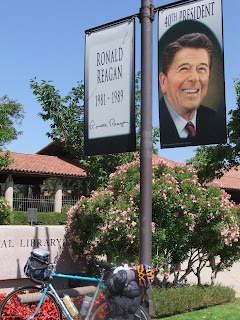 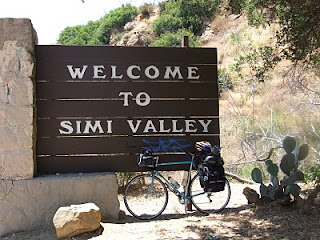 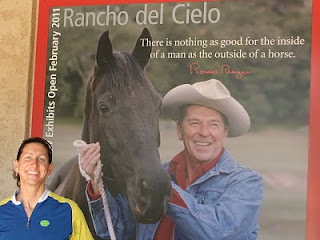 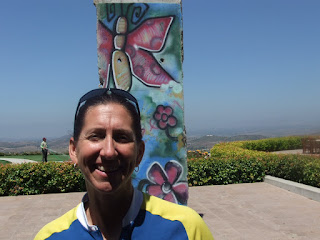 SIMI VALLEY – I can scratch the Ronald Reagan Library off my bucket list. Paid a visit on my third day in California and it was well worth the trip.

Scott Zimmer, head of library security, took my bicycle into protective custody. It helped a ton knowing my sweet ride was locked safe while I explored.

The library, which opened in 1991, has a huge bronze statue of Dutch in the entryway. He’s dressed in cowboy boots and holding a cowboy hat.

Gallery after gallery featured photos of the president and his wife, and collectibles from Reagan’s two terms in the White House.

One of the unique items displayed under glass was the brand new blue suit Reagan was wearing March 30, 1981 when he was shot outside the Hilton Hotel in D.C. A small white card sitting atop the suit coat indicated the ‘bullet hole in left armpit area.’ The suit coat had to be cut off Reagan when he went to the hospital. It also must have been washed prior to being put on display.

My god… I’m turning into my mother. I can’t believe I noticed the lack of blood stains. It’s going to be my destiny…. pretty soon I’m going to be wiping the drops out of the inside of the sink.

The library also has the president’s plane, Airforce One. The Boeing 707 is indoors and measures 152-feet long and has a 145-foot wingspan.

“Ya almost thought it woulda been bigger,” said a woman in front of me on the plane tour.

Marcie drove past the exit for the Ronald Reagan Library for years, but this was her first visit.

Marcie was a saucy woman, about 5-foot-4 with flipflops, khaki cargo capris, and a lime green t-shirt that looked like she was hiding a bag full of groceries underneath.

Marcie spoke with a bit of a funky dialect. “I’m from California,” she said. I was guessing more so Alabama – think Forrest Gump. And I mean that in a warm and nonjudgemental way.

Marcie called it like she saw it; kinda like a shrug with an “I’m just saying” qualifier. Marcie also struck me as the one in the dentist chair, laid back, having a margarita made in her mouth at La Fuente.

Marcie was with her husband and girlfriend; when the docents spoke, they talked to us as a foursome.

“This was Reagan’s office and his private quarters,” said the docent standing in the doorway of the room.

“I thought it would be bigger,” said Marcie, again.

The rooms on the plane were well laid out; a handwritten letter by Nancy with a pen carrying the presidential seal set by her signature, and a pressed dark blue airforce jacket with Reagan’s name sewn into the front shoulder rested on the back of a chair. Even the seatbelts on the plane seemed meticulously placed.

There was also the ever-present jar of jelly beans. “Is that real or staged?” Marcie asked. The docent said everything was as it would have been when Reagan flew.

Apparently Reagan also always flew with a chocolate cake on board Airforce One should there be a birthday or anniversary. The docents said there was cake even when there wasn’t anything to celebrate.

The media seating area was next and the docent explained that reporters flying with the president had to pay for their own ticket.

In common-sense fashion, she pressed the docent for a ticket price. When Marcie couldn’t get an answer she said, “Well, I’d just go to prez.com and get the cheapest price.”

– There’s a certain flamboyance about California; a lot of piercings and body art. I even thought I saw that tattooed chick who messed up Sandra Bullock’s marriage.

– Obviously an open lifestyle is also more accepted in California. I even spotted a thrift store called Out of the Closet.

– Although I easily profile ‘midwestern’, I feel I’ve been accepted in California. I was biking up a long steep hill in Ventura and a kid in a big Escalade sat in a mall driveway waiting to exit. He had a bright red mowhawk, plugs the size of quarters in his earlobes, thick black eyeliner and a look of unwanted delay. I momentarily caught his eye and quickly glanced away. Then I heard the chant “Go, go, go” echoed with strong hand clapping. “Come on girlfriend – work those legs!” The kid beeped his horn and waived as he sped away.

– I never found the West Bend belt buckle presented to Reagan when he visited West Bend. That’s because an entire wing of the presidential library was under renovation. The new gallery will be unveiled Feb, 2011 in honor of the centennial celebration of Reagan’s birth.