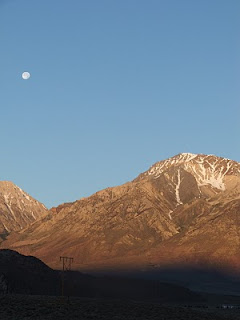 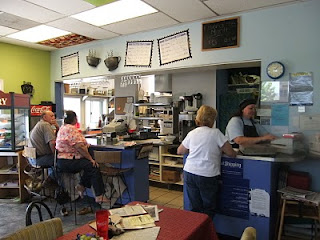 RENO – After 62 miles in record 110-degree heat on Monday I opted to go with Plan B – catching a bus in Reno to Salt Lake City, Utah.

Bikers across Santa Clarita and Carson City agreed it would be dumb to try and take Highway 50 across the Nevada desert. Plus, considering Sherwin Summit 7,000 feet, Smokey Bear Flat 7,600 feet and Deadman Summit 8,036 feet… I knew I was in need of some public transportation therapy.

Not to mention… I could feel it. The next day, after the heat and the hills, it took me three elephant-heaves just to get out of bed.

And like Venus Williams at Wimbledon…. I just didn’t feel on my game.

Bicycling from Carson City to the Greyhound station in Reno I tried to make myself cooler by unzipping my jersey; I rolled up my sleeves, pushed down my socks and turned the cuff up on my biking shorts.

…if that’s even possible.

I took the eastern scenic route to Reno through Washoe Valley.

Trudy was working the counter at the one-room store. The restaurant was to the left – with a cash register, stack of newspapers and four stools.

The postal counter was to the right – a scale, stamps under glass and a bunch of U.S. postal policy and pricing posters.

Trudy greeted everyone walking through the door with the same sign-song ‘Hello, how are you – you can sit anywhere. Can I get you some water?’

A couple of coffee customers sat at the front counter and consistent post office traffic filtered in and out.

“I’m pretty good at handling it myself,” she said, while making change for five postcard stamps.

Trudy, dressed in a black apron and tribal-patterned black beret, considered herself a chef with a postal habit; she made it clear she wasn’t a federal employee. “This is a real lucrative deal for the post office because I don’t get benefits.”

“They just contract out for this spot and simple mailing service.”

Christmas, she said, is when it REALLY got busy.

“We have packages lining this wall all the way to the back of the room and packages all along that far wall,” she said, sweeping her arm across the interior of the store.

“We have a lot of people with eBay businesses out of their home and we’re the closest post office with normally very little wait.”

Checked with two more bicycle shops in Reno and both said I was better off taking the bus across the desert.

Got to the Greyhound station downtown and had my Bonnie-experience.

“One body – one bike,” she said as I rolled up to the ticket counter.

Within a minute Bonnie was dragging a flat piece of cardboard the size of a refrigerator out of the back room.

“Flag me when you get that taken care of and we’ll tag it and get you a ticket,” she said running back behind the counter to get the phone and help another customer.

Bonnie had long black hair with bangs; 30-something, cheery, a great multi-tasker with a very dry, deadpan sense of humor.

She’d be somebody you’d want on your team, whether it be a cat fight, a bar fight or an argument.

“Listen guy, ” she said to a young man in a white wife-beater filling out a Western Union money transfer. “I need an address. Anything, just put down anything because the computer’s not taking it.” “I’m gone for one day and they install this thing and I come back and now I’m the one in charge of all things Western Union,” she complained.

Bonnie used to be a bartender. She took the job at Greyhound because the hours were better.

“But I told my boss, I’m drinking at 5 o’clock so if you want me to work tonight – I’m just letting you know.”

A man in camouflage pants and dreadlocks to his knees walked up to the counter. “That little bag of chips just enough to piss you off,” she said to the guy as she picked up the phone and reached in her drawer for more change for him to feed the vending machine.

Bonnie was experience in action and she knew well enough not to make a big deal out of things. Like, how I was only able to box my bike with the seat hanging out the top.

“I’ll just hide this in back for you and the rest of your gear if you want so you can go walk around.”

In this day of 9-11 security, that was unheard of.

I took off around Reno. The free entertainment rolling through the middle of town was the river. Tons of people, teenagers, moms and kids, families floating two-and-a-half miles down stream on black inner tubes or just body-surfing and riding the current.

Back at the bus depot I walked in about an hour before departure. Sat in front of the TV and watched Larry King announce his retirement when I heard ‘Judy come to the desk.’

The traffic at the Reno depot had kicked up 10-fold. “Judy, Judy, Judy… get over here.” It was Bonnie, my wingman, over the loud speaker.

“Hun, you’ll want to get your luggage and set it over by door number five so you’re not fighting for a seat in an hour,” she said, while processing another Western Union form and cradling the phone against her shoulder.

I feel I’m living the dream, as strangers from all over step up and take care of me.

– A grade-school teacher named Heidi helped pull me across some mountains in California all the way to Lake Tahoe. “You’d never make it on a bike and as long as you’re here you might as well see it,” she said. As we began the long ascent, Heidi talked about how school was changing, her adventuresome father who acted in westerns with Ronald Reagan, and her grandfather who was a famous radio newscaster named Sam Hayes. While Heidi talked… I felt myself leaning toward the center of the vehicle. The mountain to get to Lake Tahoe was HUGE and we… were along the outside guardrail.

After witnessing the beautiful lake, Heidi dropped me at the intersection to ride down the mountain. Nothing like a 12-mile descent at 43 miles an hour. Really… I couldn’t wait for it to end and it was exhausting! Again, riding close to the guardrail, no possibility of looking at the great view because of the concentration needed to stay in my lane, read the road and avoid the sewer grates which could easily throw my bike.

– I met George as I was leaving Carson City. He was an old guy with a beard, heavy square glasses with a line for bifocals, and a red running suit with matching jacket and pants. George was watering the plants up against the brick wall by the parking lot of the low-budget motel. He sprayed the plants like he was trying to peel paint off; the plants didn’t stand a chance. For 10 minutes George tried to pretend he knew how to get me from here to there. I, pretended to listen; playing along and exercising my skills to strengthen patience. When George finally took a breath, I thanked him and made obvious motions that I was soldiering on.

George had one final bit of wisdom. “I hear bikers and dogs are alike,” he said. “They like to check out each others rear.”

I look up and here’s George, bent over and looking extremely closely at …um, well, um – err my rear wheel.

No slang or double entendre…. my bike tire.

I shrugged and told him “I hope he liked what he saw.”

– Tattoos are all the rage in Carson City and in Reno. Not just like one or two, but an entire sleeve on both arms of tattoos. Met a guy named Eric, he ran a place called Sober Santa Fe which was a shelter/rehab facility. Eric was finally out of prison and staying clean. His entire skull was tattooed, as were his arms and neck. He said a lot of the work was done for free, by his buddies. “If I could take it all off, I would,” he said.