Wonderful evening at the Great Minds Gala presented by Integrace and LeadingAge. The event was held Monday evening at the Marriott Wardman Park in Washington D.C.

I was presented with the Exceptional Friend or Family Caregiver Award for my bicycling tours to raise money and awareness for memory care activities at Cedar Community. A huge thanks to Tracey Stroeh for the nomination.

I was able to meet with Dr. Alexander “Sandy” Halperin (see photo above) – the winner of the Senator William and Ellen Proxmire Award. You can view Sandy’s Story by clicking HERE; it’s well worth your time to view it. An Excellence in Dementia Care Award was presented to Phoebe Ministries that evening, as well. 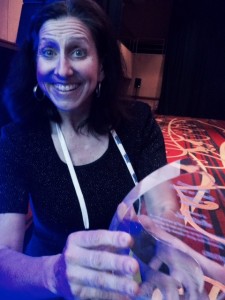 The evening was fantastic, like an Academy Award show.

There was opening entertainment from the Saint Augustine Gospel Choir (click on the link to hear their performance) followed by presentations, videos and a dinner of filet mignon, roasted tomato bordelaise, pan-seared dayboat scallops, and lemon pepper coulis with broccolini and julienne vegetables. 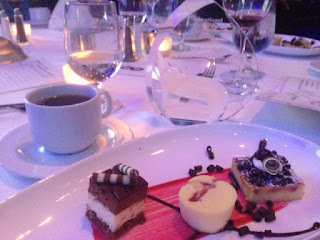 All of this was followed by a sweet trio dessert consisting of a black & white mousse square, strawberry swirl cheesecake and a chocolate cherry tart.

Some tidbits from behind the scenes:

-During rehearsal the event coordinator, Sharon Sullivan, kept mentioning ‘the band.’  “You’ll take the stage after ‘the band,'” she said. I knew this was a high-end event so, being the reporter I had to ask. “Is One Direction going to be here tonight?”  “How about the Fu Fighters… are the Fu Fighters the band you’re referring to?” There was quite a bit of secrecy surrounding the evening and I was approaching it like a Nancy Drew mystery with a Rolling Stone twist.

-We were given the option of putting our acceptance speech on a teleprompter. I passed on the offer and figured I’d wing it.  I did awesome! …. everybody said so. 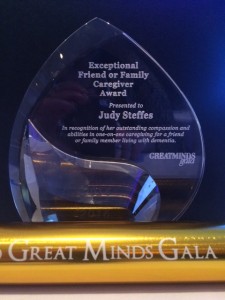 -Some scuttlebutt at the ceremony indicated the award winners this year would be presenters at NEXT year’s Gala.  WOOT WOOT!  Another return trip to D.C. spending time with others who are passionate about Alzheimer’s and dementia care progress and cure!

-I totally pulled a R. Douglas Ziegler and approached as many people as possible to see if they would sponsor this year’s Amazing Ride for Alzheimer’s bicycle tour. I asked permission from the organizers and the reps from Cedar Community – just to make sure I wasn’t out of line. Hopefully I’ll have great success and kick the fundraiser past the six-figure mark this year!

-The award is crystal and it’s going to be on display at Cedar Ridge upon my return.

-I did have some concerns about the lighting on stage… especially if you could see through my dress. I felt very Beyonce….  but I figured I was in Washington D.C. and this was not even close to D.C. scandal.

-A final thank you to LeadingAge and Integrace for the honor of being a distinguished guest and a part of the exciting event that brings us together on behalf of those who suffer from dementia.