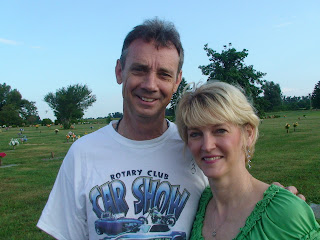 Mike and Cara
Crossed the state line Thursday from Tennessee into Kentucky with little fanfare.
I was on Highway 45E. There were no signs like, ‘Welcome to Kentucky – the Bluegrass State’ or ‘Thanks for visiting Tennessee.’ The most I happened upon at a triple intersection was a ‘Welcome to South Fulton’ sign buried under a wooden cut-out of a locomotive shoved into a dry bed of flowers.
“Need some help with your map?” said a voice from a white van that pulled up alongside. It was Mike Lynch; local businessman, community servant and all around good guy.
We mapped for a bit, debated my options down the road and then Mike came up with a game plan. “Why don’t you come home with me and stay the night,” he said, quickly following up with “I’m not a pervert, let me call my wife.”
Mike was forever upbeat, a skinny guy with loads of energy. “Honey, I met this great woman and I’m bringing her home,” he said on the phone. If the conversation didn’t sound good on my end, I can imagine what his wife, to whom he was united in marriage, was thinking.
Mike owned the local funeral home and his wife, Cara, was a nurse who spent eight years in the emergency room and now worked in home healthcare. Both were tied to the phone in case of emergency.
Mike went to work and swapped vehicles. We put my bike in the back of his pickup and he let me ride up front. We drove three miles out of South Fulton to his wonderful home on 10 acres. There was a cornfield surrounding the brick home, a little dog named Bullet in the driveway and red Corvette in the garage. A 1969 Norton sat across the yard in the man garage.
The Lynch’s spoiled me with a barbeque chicken dinner complete with a squash-potato salad, and sliced cucumbers in vinegar spooned out of an old crock on the kitchen counter.
Their home had high 9-foot ceilings, crown molding, and a lot of antiques and art.  In the evening they set me up in a high antique bed with sheets so soft I felt like I was floating in my dreams.
The next morning, the Lynch’s drove me to the outskirts of town, dropping me off in the driveway of a cemetery. Fitting, considering Mike’s line of work.
“Goodbye Little Daniel Boone,” said Mike waiving; it was a name he had given me during our conversations as he appreciated my adventuresome spirit.