Menu
Menu
Early start Saturday pedaling Santa Fe to Las Vegas, N.M.  Another day with the best of intentions.
Left Holy Faith Church and saw a 20-something crawl out the first-floor window of a business next to the church.  I didn’t even think of crime, more so he needed a place to flop for the night and now he was leaving before anyone was the wiser.
Turning off I-25 into Pecos there was a cozy farmers market; two vendors and a sideshow – a teacup chihuahua named Coco. 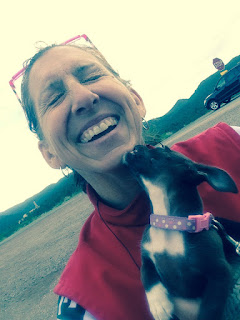 Picking up an animal so small makes me feel like a giant. 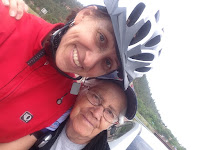 Julia, 83, was the food vendor. She wore a weary baseball hat with a symbol of Our Lady of Guadalupe. She sat in a seasoned lawn chair that was shuffled from market to market and watched the traffic from behind a table filled with a vista of homemade breads and jams. 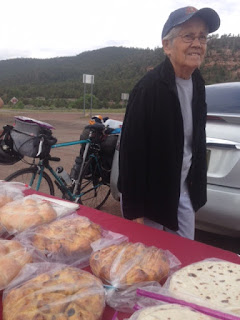 There were beautiful raisin breads and flour Tortillas; choke cherry and cranberry jam and jars of rich red salsa.
Her neighbor, Paul, had a variety of tools, collectibles and whatnot. “See this finger,” he said holding out a ring finger that refused to fall in line. “My only injury after years of motocross.” 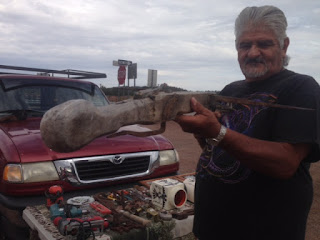 I politely looked over Paul’s wares and he eagerly explained everything from the individual stones to collector coins and even an antique crossbow.
Julia’s daughter Marie was led around the small gravel space by the chihuahua. She talked about my road ahead, the good food stops and how she used to love riding bike.
“But when I got hit by a drunk driver the doctors wanted to cut off my leg right above the knee,” she said.
Marie (photo below) proceeded to show off a series of scars on both legs. Julia also wore a bandage on her leg but talked about recently breaking her hip. 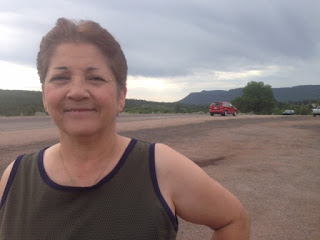 Paul, who had already relayed the story about his broken finger, shared details about a book he ordered that showed how many people around the world shared your same name.  His was in the millions but he returned the book because it cost too much.
As I prepared to leave my new friends  Julia got up from her chair and walked over. I though she was going to help me with mapping and instead she reached up and gave me a hug around the neck and told me to be careful.
Paul came over and gave me a small crucifix. “Put it in your pocket. It will keep you safe,” he said.
And I have to say the crucifix worked.  I proceeded to have three flat tires within the next 17 miles. 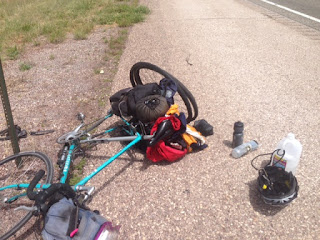 I completely raced though all my inner tubes but was rescued from the side of the highway by a wonderful woman named Christina.
She spent the whole day with me searching out a bike store, which ended up being Walmart, so I could get a slew of inner tubes.
And I met a fellow adventurist, Craig, who took me out to dinner to share stories of rock climbing, biking and the “ghetto” way to put Slime into an inner tube to help ward off flats. 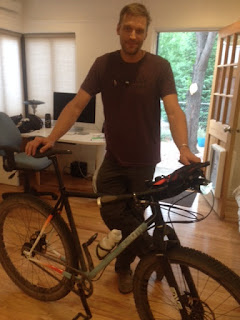 An exhausting day but a safe day blessed with the kindness of strangers. 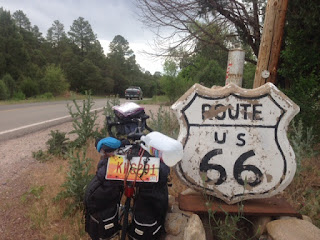