In July 2004 I bicycled from West Bend to South Dakota. Below
is a portion of that travel journal. 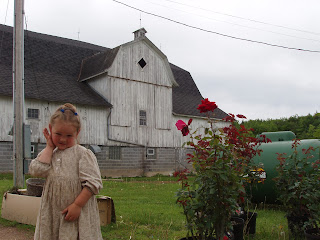 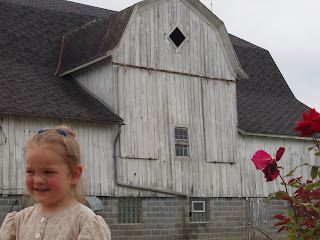 This city is unbelievable. It’s a mix of Norman Rockwell with a hip shot of twentieth-century groove.

My first stop was an antique store. It was actually in a garage. The owner, Nancy, said she had been living out of her garage for the past 22 years. I don’t know why I stopped. I can’t buy anything because I’m not about to carry anything else.

It was torture because she had a lot of cool things like an orange ash tray resting in a black stand with a golden antelope leaping over the tray. A bargain at $25. There was a Saturday Evening Post of the Beatles, dated March 1964. A steal for $20.

There were a bunch of old radios stacked neatly on a shelf; Admirals, Musicare, Delco, Sentinal, and Silvertone. Nancy’s favorite pieces were her brown-and-white transfer ware; white dishes with intricate brown patterns.

Nancy let me use her phone to call the pastor in town to see if he would let me stay in the church hall for the night. After several unsuccessful calls Nancy deemed it too much work and said I could stay at her place.

“By the way, I’m leaving for the night so would you mind watching my place,” she said.

That was some quick trust established in 10 short minutes.

Nancy’s home dated to 1910. Her husband had died several years ago and she was going to visit friends for the July 4th holiday.

Having secured a nest for the night I bicycled around town a bit and saw the neatest things.

All the shops on Decorah’s Main Street were cool, independent businesses that tried to team with the one next door.

LaRana Bistro was Nancy’s favorite eatery – upper class but comfortable. Wood floor and wood bar with Anchor Steam beer and Guinness on tap. Other selections lining a glass shelf above the back bar included a 16-ounce can of Old Speckled Hen and Schell Pilsner.

The menu was mid-priced and the dessert list started with Carmel Pecan Cheesecake.

The theme they shared with the spa next door was frogs. The spa was closed but had a frog on the tin sign out front. The restaurant had a black door jam in the shape of a frog and their screen door had a tin sign that read ‘Ask for Kleen Maid Bread.’

The ice cream shop in Decorah was called the Whippy Dip. There were two bicycle shops. Mike, from Oneota River Cycles gave me a map and filled up my bottle of chain cleaner. Both acts of customer service were on the house.

A couple blocks from the Whippy Dip were kids floating down the Iowa River on black inner tubes. There were silver baskets of Polly wave petunias hanging from every light pole. There were kids on bicycles everywhere. Adults too. Some were giving me the ‘evil eye’ but I found out it was because I was riding in the street. Decorah has marked bike paths on their sidewalks. It was amazing.

Downtown was the Magpie Coffee House with no charge Internet.

Wade’s Window Burgers was a window, with a menu on the wall. You could order a wide selection of a burger, brat, taco, taco-dog, hot dog, malt or float. The place could have been mistaken for a simple apartment window with a sliding screen. I’m thinking it was an easy place for a health inspector to miss. There were no customers outside Wades.

On the corner wall of Water and Winnebago was the Dolan Snyder Pharmacy. There was a detailed, color mural of what the corner used to look like in 1898. The picture showed Ben Bear Square, a shop with ‘fine clothing’ written on the front window and a sandwich board on the street that read: ‘This is the place to get your spring suit.’

Off the main drag I found the schools. The red brick building was undergoing major construction. The front of the school had Decorah High School engraved near the top of the building. Underneath, in white letters was Decorah Middle School. Next door were a series of small trailers. On the front door there was a sign that read ‘Mrs. Procter’s portable 5th grade.’

Ran into a man named Lanny at the VFW. “It’s short for Landis,” he said. Landis was a retired barber who reminded me of the lead singer from The Blues Travelers. He had a round face and square glasses that magnified his eyes and made him look like a sleepy turtle.

Landis was 61 years old and returned home to the place where he got his first job at the age of 17.

“Everyone wanted their hair cut like Elvis,” he said. The Beatles came along and put him out of business. “Nobody came in for a hair cut because it took them three months to just grow it out.”

Landis was sporting a white ponytail. It was pretty unkempt for a former barber. He also had white pork chop sideburns. His whiskers blended with the long hair coming out of his ears. Landis also had white, Nike running shoes that probably never ran a step. He had black socks, kind of like Michael Jordan but his doughy white legs were a far cry from Jordanisque. Landis wore some unfortunate black shorts, a black shirt, silver and turquoise bracelet and a straw cowboy hat.

He also clicked his teeth together when he talked. I think it was to pop his ill-fitting dentures back into place. Miller on tap was his beverage of choice and he smoked Marlboro lights with a rubber band for his hair wrapped around the lighter.

Landis said he felt comfortable in Decorah. He told me to go look at the minuteman statue at the courthouse square. He said it was a target for high school pranks. The latest was a kid who scaled the statue and put a white baseball cap atop the minute man’s head. He said the kid fell while climbing down and broke both his arms.

I walked across the street and down the block to the statue. It was about two and a half stories tall and on top of the gray, concrete minute man was a white baseball cap.

After getting past my obvious obsession with my new best friend Landis I decided to move on and notice other things about Iowa.

– Iowa likes to put rumble strips before all their stop signs. I’m not used to that, even on the most remote country roads. Since I forgetfully stumbled onto all of them along my route, I need to see a bike doctor to true my back wheel.

– Iowa has pull tabs in vending machines. They’re anywhere from 25 cents to 50 cents and all the garbage cans next to the machines are full with lost wages.

– The latest book I’m adding to my littlest library will be ‘Friendly Farm Dogs of Iowa.’

– A can’t-miss hit on the 4th of July holiday celebration was broadcast all over the local radio as a demo derby between combines, pickups and mini vans.

– KVIK radio 104.7 FM actually had a station window facing the main drag in Decorah. There was also somebody live in the studio. Imagine that! I ran into a classic country show while bicycling. It wasn’t my first choice, it was my only choice. But, they did play some good music, all in a row. Keith Whitley, Vern Gosdin, K.T. Oslin, and The Judds. If they had veered from their format and thrown in a little David Cassidy, I may have had to throw a resume their way.

– Trying to keep up on national news. I understand Marlon Brando is dead. Someone classified as ‘Anna Kornakova with game’ won Wimbledon. John Edwards is John Kerry’s choice for VP. And… Kenny Rodgers had twins. I heard he ran into Rod Stewart in the maternity ward of the same hospital. What a coincidence. I guess Stewart was at the hospital awaiting the birth of his next wife.