Today’s marks one week since I’ve seen my gear. I’ve dubbed the lost luggage Baby Jessica – similar to the 1987 situation in Midland, Texas. I fear my gear has fallen down the well of lost luggage and I’m waiting for its rescue.

E-mails from a newly assigned specialized search agent with the airline leave me with flagging hope as each memo continues the drumbeat of bad news. 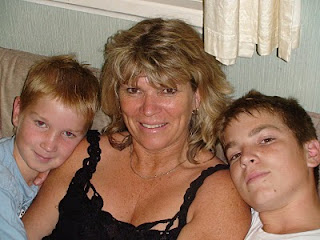 His wife Roz did say it was okay to bring me home and son, Drew, 9, said my visit “made them clean house.”

Along with precocious young Drew, there was Ryan, 14, an avid bicyclist, talented soccer player and a young man with genuine hospitality and manners; not something that would impress the ‘tween girls just yet, but it sure did make his parents proud.

Ryan was a true gentleman.

Nicole, 20, was the hard-working daughter who was debating a career with the police or health care.

We all found common ground within minutes of my arrival while discussing musical tastes like Pink, Katy Perry and Nicole’s favorite, Justin Bieber.

“I can’t stand him,” said Nicole, who tempted whiplash as she flung her head to the side mocking Bieber’s hair toss.

We dined outdoors on the back patio as Paul barbecued chicken kabobs and steak on the grill. Roz laid out a decorative salad, potatoes, meringue with strawberries and ice cream for dessert.

We managed a gender-specific game of soccer after dinner. Drew soon jumped ship on the boy’s team and then gravitated to whichever side was winning.

The game was soon replaced by an evening visit to all the animals. Roz and family used to run a petting zoo and they still owned a small pony, chickens, and a black bull.

The Christensen’s were a unique group. Obviously tight knit and helpful, they jumped in the mix upon hearing my luggage fiasco and made it a team effort to at least get to the bottom of the situation.

It was an impressive attempt – two phones working, Ryan monitoring the ‘on-hold music’ as Roz pushed to speak to a supervisor on another line.

The next morning we were back at it; the Christensen’s working behind the scenes as I relayed my case to yet another clerk based in India.

It was like the Amazing Race and we were in it to win it.

Ryan filled my water bottles and packed my maps in plastic bags. Roz cobbled together a bag of snacks including two oranges, some granola bars and fruit snacks and Paul found some spare tools in case I suffered a bike breakdown.

I can usually manage a crabby hope in these situations, but lately I’ve just felt crummy.

The Christensen’s warmth and cooperative effort made me feel I’m not in this alone.