July 13, 2019 – Morocco, IN – Spent much of the day Thursday weaving my way north from Lafayette, IN towards Chicago with the goal to avoid Gary, IN, for safety reasons.

I fell shy of Gary and rolled into Morocco, Indiana; a metropolis struggling to eke out a population just over 1,000 and home to the saying “Hoosier Hospitality.” 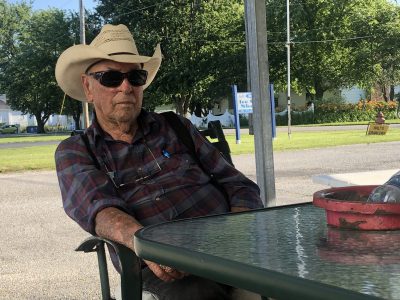 I found the hospitality right away with Jack and Rita. The couple were relaxing in the shade under a metal canopy at the Moracco Car Wash as customers stopped for gas, smokes or a soda.

“The shade will cost you,” said Jack.

Rita admonished him and invited me to join them and “take a load off.”

Jack and Rita owned the business. The sign said car wash but it was really a gas station/convenience store.

Jack hailed from Texas and Rita from Chicago.

Jack wore a straw cowboy hat, smoked Marlboro and wore dark black cowboy boots that were so deep and rich they looked purple.

A truck driver in his first life, Jack also farmed steer and sheep.

“How do those truckers treat you on the highway,” he asked.

I told him I stayed on my side of the white line on the shoulder of the road, I’d stretch out my hand to warn them to give me room and I had a blinkey red light on back.

”A white line and a blinkey red light.” He said it like it was John Wayne talking.

I think Jack was quickly starting to care about me because he knew those two measures of protection I touted wouldn’t do squat with a semi bearing down.

“Where ya stayin,” he asked. 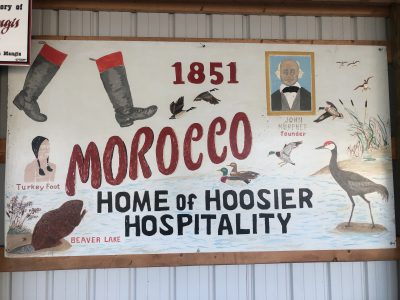 I said Morocco seemed like a nice spot but I was still waiting for one of the churches to call me back.

A few more customers, followed by some get-to-know-ya conversation and Jack offered me the keys to The Morocco Lions Club.

”I’m one of the last members alive that built that,” he said.

Rita came out of the store as Jack walked back in. They must have had a word in passing.

”I see you’ve got a nest for the night,” she said. “I’m pretty proud of Jack… he came up with that idea on his own.” 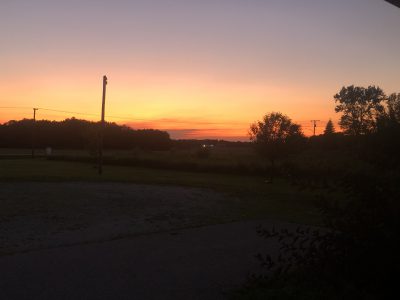 My view that night of the sunset.