Menu
Menu
NENANA – Made my home in Nenana, AK on Friday; I made it 59 miles of the 367 miles from Fairbanks to Anchorage.
Nenana is a quaint community of 360 bordered by the Parks Highway and the Tanana River. Senator Jack Coghill has strong family ties to the town – Coghill’s General Store is the hub for baking and cooking supplies, movie rentals, and what-not. 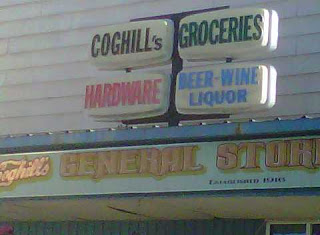 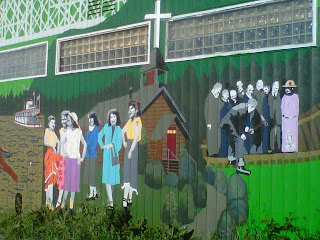 A mural painted on the side of Coghill’s General Store that depicts
President Harding driving the “golden spike.” 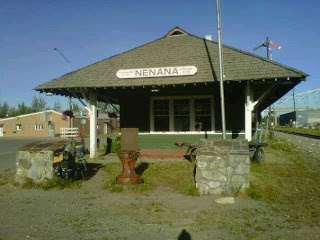 Warren G. Harding was the 1st U.S. president to visit Alaska.
He pounded the golden spike signaling the completion of the Alaska railroad
from Tidewater to the interior on July 15, 1923. 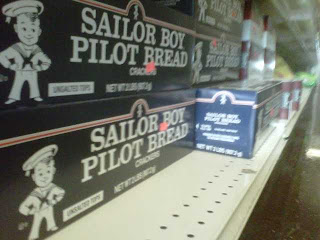 Coghill’s General Store store aisles (above and below) 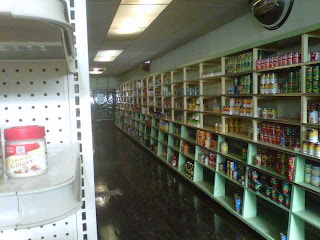 Established in 1916 by William A. Coghill, the store is owned and managed today by granddaughter Marilyn Duggar nee Coghill. 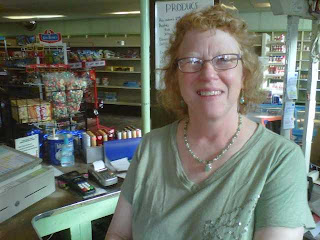 Marilyn Duggar (Coghill)
Unique aspects of Nenana: It’s home to the oldest train depot in Alaska, and the popular fish wheel is native to this area as is the annual Nenana Ice Classic – a 98-year-old contest of guessing the exact minute the Tanana River will break up each spring.
“All this shows you is Alaska is a boring place,” said Jack, a man in a Green Bay Packer shirt nursing another can of Pabst Blue Ribbon at Jester’s Place on the main drag in Nenana. 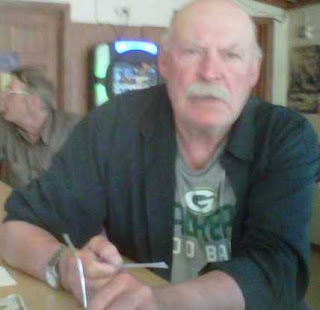 Jack, originally from Wisconsin, Packer backer
Jack hailed from Wisconsin. “Up near the Tomahawk area,” slurred Jack. “And don’t speed or my niece, the state trooper, will give you a ticket.”
Jack buys me a PBR as the locals explain the premise of the aforementioned Nenana Ice Classic contest. “Prost,” I said, with a tip of the can in Jack’s direction. “Give it a good home,” said Jack.
There are colorful framed posters lining the wall of Jesters, all highlighting the Ice Classic which is a wood-frame tripod planted two feet into the Tanana River ice between the highway bridge and the railroad bridge at Nenana, just upriver from the Nenana River tributary. 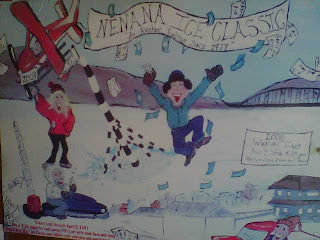 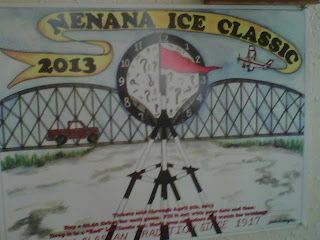 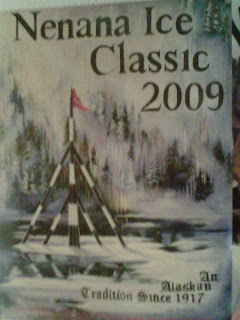 A wire is attached to the tripod, which is 300 feet from shore, and connected to a clock and horn that sounds as the ice goes out.
“This was started by railroad engineers in 1917,” said bartender Jim. “They bet $800 guessing when the river would break up and last year, during the 97th year of the classic, the winners shared prize money over $318,000.”
“I tell you what,” said Jack. “We live here and we never win.”
Jim said a woman from Japan recently won and he hands over a tri-fold flier that explains the Nenana Ice Classic for 2014 – an Alaskan tradition.
The black-and-white flier reads like a race card at the track. A graph shows the popular hours of the ice break; a calendar grid shows the history of the winning dates and times dating to 1917.
“There was an anomaly on May 1, 1991,” said bar patron John, lighting up a Marlboro as he talked. “On that day there was an earthquake at Mt. McKinley at 11:20 a.m. and by 12:04 a.m. the horn sounded in Nenana and the clock stopped because the ice broke.”
Tickets are $2.50; sold throughout Alaska from February 1 through April 5. “We can’t sell the tickets out of state, so you might as well get your guesses in now while you’re here,” said Jim, trading a pair of tickets for a 5-spot. Depositing my tickets for the contest
This year the ice broke late on May 20 at 2:41 p.m. In the past 97 years over $11 million has been paid out.
Side notes:
– There’s one thing noticeably missing from the Alaskan landscape – billboards. A law was passed that asserted billboards would take away from the majestic scenery in AK.
– Tourism is a HUGE industry in Alaska but it struck me how folks statewide go the extra mile on the little thing such as…. at every train stop from Anchorage to Fairbanks , whenever we pulled into the depot people were waiving – everybody!  It was very Twilight Zone in nature – but such a simple effort that made a big impact.
– Saw a woman in a store in Nenana who had the stars in the Alaskan flag tattooed on her face.