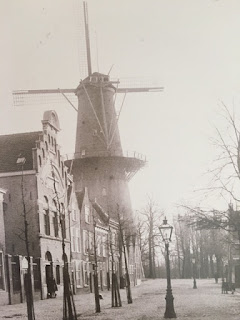 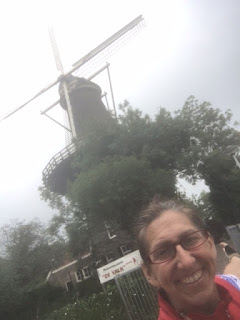 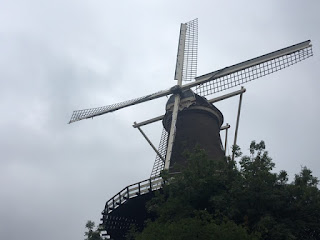 The De Valk, or The Falcon, is a tower mill that dates to 1743.  It is seven floors in all and used to be home to the miller’s family and even a cow or two. Suggestions on how to get down. The docent said kids do the best but parents are scared. 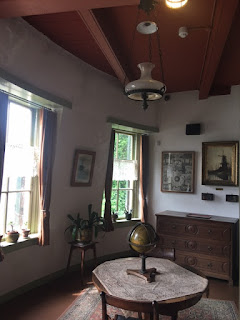 The upscale living quarters on the first floor of the De Valk mill. 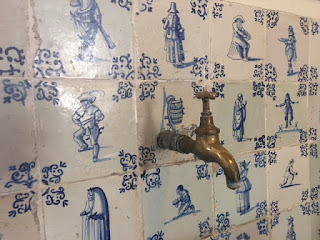 The decorative sink in the kitchen inside the mill. Wooden gears and wheels and whatnot near the ceiling on the fifth floor of the windmill. Looking up the narrow ladder stairs. 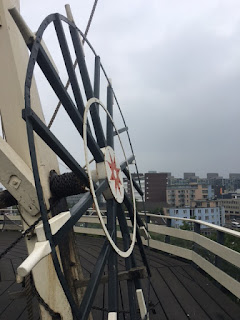 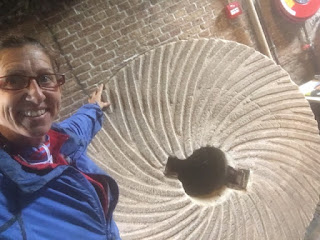 The grinding stones were enormous, the stairways or ladders steep and the life of a miller had to be difficult and very demanding and all while “wearing wooden shoes,” said the docent Danielle at the front desk.
A couple interesting tidbits:
– The De Valk mill was pulled down in 1743 and replaced by the present tower mill; this time the body of the mill was built in brick.  A stone tablet shows the undertaking was completed in 2-1/2 months.
-Over a century ago there were 10,000 windmills and now only 950. Most mills were lost in fires or they closed due to poor maintenance.
– The millers in Leiden were organized in the Guild of Saint Victor. In the Netherlands Saint Victor is regarded as the patron saint of millers. He was a Roman soldier, who as a Christian and refused to sacrifice to a pagan Roman god. His punishment was to be drowned with a millstone around his neck.
– The steam engine came into use in the 19th century and windmills were no longer necessary. They gradually disappeared from the city. Since 1950 only one mill has survived and this is De Valk (The Falcon).
-A millers fee was fixed by the authorities until 1805 when a tax had to be paid on every bag of grain. A tax inspector stood by the entrance to some mills; nevertheless, many millers managed to evade the regulations. Up until 1869 there were even ‘smugglers cupboards’ in De Valk in which the miller hid untaxed flour.
-Windmills were once saw mills that helped the ship building industry; the Dutch had one of the best fleets. 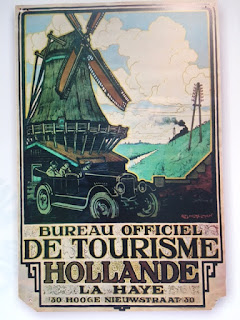 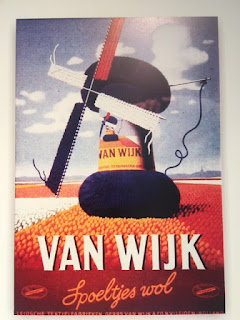 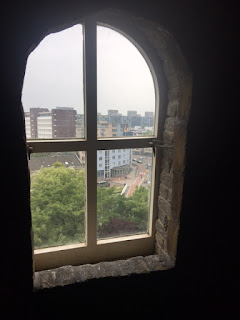 Looking out on the city of Leiden from the fourth story Weights used to hoist the grain up to the top level. The windmill did all the heavy lifting. A pulley and one of the old signs at the mill The super secret bathroom on the first floor of the mill.
The toilet paper was crisp and faded brown and looked original. The docent said the main bathroom was on the same floor as the cattle. So, not only did the family live in the windmill and operate it as a place of business to produce flour but it also housed a cow or two. If a part broke in the windmill there was a person in town who could craft a new one.
This was the directory hanging on the wall in the entryway