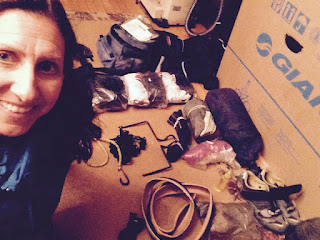 This is the most organized I’m going to be during this three-week bicycle tour. Everything is rolled tight, precise and wrapped in plastic. Once the tour hits I will wish for this much clean indoor space where I can spread out and get my bearings.

It’s all part of the adventure.

My friend Lisa stopped today to pick up her instruction kit. I have a very close team of five friends that keep an eye on the home front and on me. Keys, credit card cancellation numbers (just in case), insurance, passwords and log-in numbers. They volunteer – – mostly because they care.

I’ve still got to shed about 10 pounds worth of gear yet. Repair tools weigh the most along with electronics – everything has a power cord and I’m carrying a couple of contraptions that allow me to juice up my camera/phone/computer if I’m not near an outlet.

Also a shout out to Jillian Clark who donated a map of Italy. I grabbed that today and picked up a message from my new best friend in Italy. See below. We’ve never met – but it shows the power and reach of social media.

Me thinks I’ll have legs that will rival Denise Austin when I’m done with this tour.  Ciao.

The Po Valley in which Milan sits is nice, flat country full of rice fields and fruit orchards, but north is the beginning of the Dolomites, so you will be doing a lot of climbing.

To get to  Tuscany or Umbria, you will have to cross some mountainous terrain as well.  The only other relatively level area is on the Adriatic coast east of Milan and on the other side of the mountains.

When I lived in Cagli, which is a mountain town near the Adriatic, I used to see teams of German bikers who were heading south toward Rome. Some were following the route of the Giro d’Italia  which Periodically
went through Cagli on the way to the Adriatic coast. Climbing was part of their plan.

Mountains are the rule in Italy.  Florence sits on the Arno River in a valley surrounded by major hills.
That said, I would try highway E45 which runs through flat land with modest hill climbs — wide, well paved with interesting towns along the route from Ravenna to Rome with a major climb at Terni.

One advantage is that Italian drivers are used to seeing bikers on the highways, and biking is taken very seriously, so bikers are treated well..  You will find high-end bike repair shops in almost every town of
any size.  Along with a local biking club.

Be sure to take  camelback.  Water can be hard to come by in the heat.