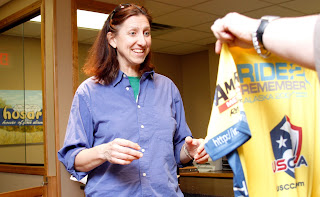 Preparations for this summer’s bicycle tour are rolling along as I will spend three weeks in July pedaling around small gold-mining towns in Alaska and filing stories about my adventures. This tour is slightly different as I’m biking to raise money and awareness for Alzheimer’s programs at Cedar Community.

So far I’ve managed to raise $17,000 in corporate pledges and sponsor logos will be featured on a tour jersey that finally arrived last Friday. It was a real team effort working with Kelly Dahlberg and Helyn Skurzewski from Husar’s Corporate Gifts and Promotions. Husar’s sponsored the printing of the jerseys.

My father has Alzheimer’s. He inspired my love of bicycling and I feel this effort is the least I can do to pay him back.

At 89 my dad can tell you the day he was born, the names of his seven children and he can still recite Mass in Latin. However, he doesn’t know his age because he doesn’t know what year it is. To put it in perspective, he thinks Bill Clinton is president.

Classified as a “happy Alzheimer’s,” my father is easy going, a dedicated walker and avid napper. He doesn’t build or fix things anymore, but we often take road trips to The Shed, a handyman’s consignment store in Slinger, to see if he can identify tools like a wood planer, big tractor wrenches or a cutter head for a doweling machine.

I see the positive impact music and exercise have on his life. This past weekend we went to the Schauer Center in Hartford and saw “Tap: The Show.” While he never initiates conversation, my dad turned to me after the performance and said, “Now that was an ‘A’ No. 1 show.”

A dancer in his youth, my dad frequented the Eagles Club on Wisconsin Avenue in Milwaukee. My mother said he knew how to waltz and polka and they were always in a class like country line dancing or square dancing.

In a memory book we made him for Christmas my sisters wrote about how “One year in high school I invited Dad to the Father/Daughter Dance — I was proud that my Dad was such a good dancer.”

For the next few months I’ll be training for Alaska and rallying support for Alzheimer’s. I’m also looking for a little help, as I’d like to bike each day in memory of a person affected by Alzheimer’s. Tour pledge information and details are on my website at http://imthebikewriter.blogspot.com. Donations can be made to Cedar Community Foundation 113 Cedar Ridge Drive, West Bend, WI 53095. For a tax write-off, include the Federal Tax ID No: 39-1249432.