February 13, 2022 – Weeki Wachee, FL – There are signs of pirates in Florida and talk of mermaids. Pedaling into the community of Weeki Wachee you’ll find it has flair similar to the Wisconsin Dells with unique dinosaur art followed by a chaser of mermaids. 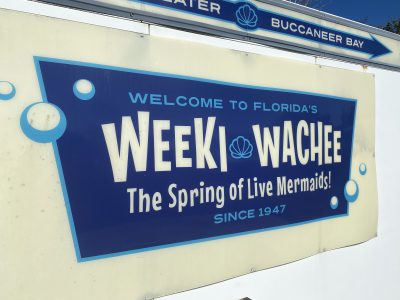 The underwater show at Weeki Wachee is Disneyesque with a voiceover script lip-synced by underwater actors in bikini tops, mermaid tails, and what looks like a hookah pipe. (It is the oxygen resource.) 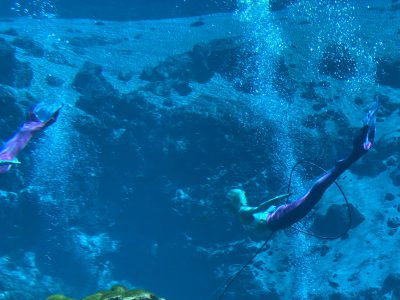 The entire show is performed underwater, except for a brief stint on stage once the mermaid’s wish for legs is granted so she can have a dance with the handsome prince. 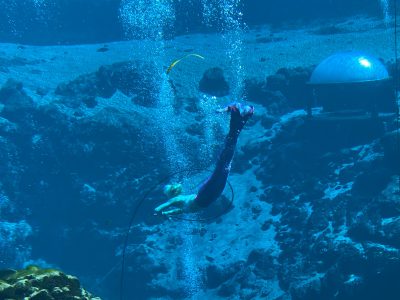 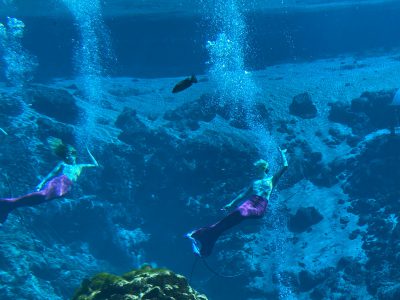 The mermaids spin and wave as real fish swim in front of the audience watching the show through the giant aquarium glass.

Reminded me of this Disney quote by Sebastian in The Little Mermaid, “Down here all the fish is happy. As off to the waves they roll. The fish on the land ain’t happy. They sad ’cause they in the bowl.”

After the performance, the mermaids arrive on land to meet guests and pose for pictures. During a lull in kid traffic, I had an in-depth interview with a mermaid who hails from New York.

“It’s always been my dream to be a Weeki Wachee mermaid,” said Nikki.

It is her third year in the performance. “Once I get this acting bug satisfied I will probably pursue some sort of scuba diving/tourism field,” she said.

Down to hardtacks. “Who is dating the prince?”

Nikki said there are budding relationships. Over the past 60 years, one pair of performers got married and now their daughter is in the show.

”Other performers also come back,” she said. “Retired mermaids are called sirens. They’re such a large group they have reunions.”

The fitness level of the mermaids is Olympic in nature. “You need really good core and arm strength, “ said Nikki.

Weights are not used to keep actors underwater. And the water comes from a fresh spring with a temp of about 72 degrees. 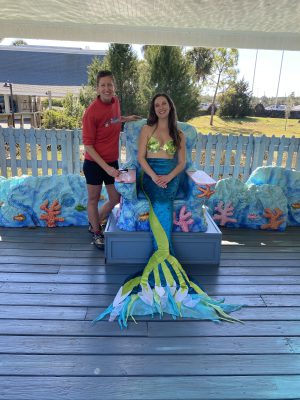 After posing for a rare actual photo with a mermaid I moved along to explore the park, but… spun around for one last question and heard a dramatic thump like a wet log falling on a hardwood floor.

The mermaid’s shift above land was over and she was off her chair and back to the water. I’m sure they’re instructed not to ruin the mermaid mystique so in typical Darryl Hannah fashion Nikki clunked to the ground and was crawling back to the dressing room with her mermaid tail in tow. 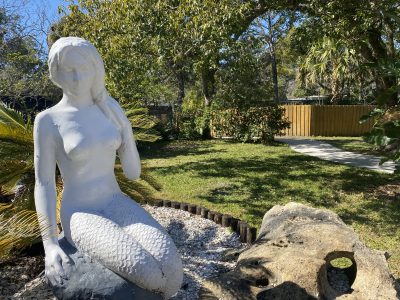 Because I had to ask… “yes” there is currently a mermaid from Wisconsin. But neither of the two out of water could pronounce where she was from. 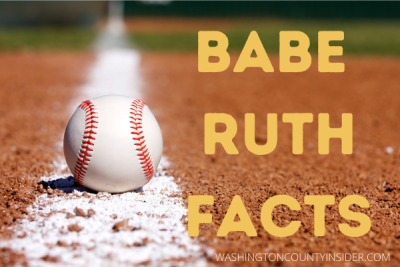 Ruth was not a unanimous choice for the Baseball Hall of Fame.

A year after his retirement, Ruth was among the five initial inductees elected to the new National Baseball Hall of Fame under construction in Cooperstown, New York. In spite of Ruth’s amazing career statistics, 11 of the 226 voters left him off their ballots, and the “Sultan of Swat” trailed Ty Cobb as the leading vote-getter. Ruth’s plaque in Cooperstown refers to him as baseball’s “greatest drawing card.” Klein, C., (2014, July 11) 10 Surprising Facts You May Not Know About Babe Ruth history.com https://www.history.com/news/10-things-you-may-not-know-about-babe-ruth

“Have I not commanded you? …  Be strong and courageous. … Do not be frightened, and do not be dismayed, for the Lord your God is with you wherever you go.”  Joshua 1:9