Menu
Menu
SOLDOTNA – Across the street from the Soldotna Historic Museum I saw a series of police vehicles. I crossed the four-lane highway and found I was wrong. It was the headquarters for Alaskan State Troopers! I’m not much of a reality-TV buff but who doesn’t know about the Troopers.
I’m dorking out taking photos next to the marked squads sure they were watching on surveillance inside.
I rang the buzzer at the entrance and the dispatcher said she’d send a Trooper to answer my questions. Out walks 6-foot-6 Trooper Michael Wilson; he looked like the Hollywood version of He-Man. 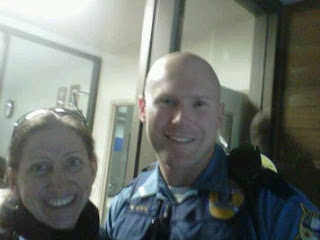 Wilson did justice to his uniform; even his bullet-proof vest was form fitting and he had arms like a Disney prince.
We stepped outside, talked about stuff, I really don’t remember. Trooper Wilson kept scratching some mosquito bites on his elbow, thus forcing him to flex.
“Do you want to come inside and see our headquarters?”
Trooper Wilson was 33 years old and a firefighter in Colorado before becoming a Trooper. “I really wanted to do more to make a difference,” he said. “Firefighting is so reactionary; I want to be proactive.”
We toured the waiting area and booking room which featured a computerized fingerprint machine and an industrial-strength, uncomfortable wooden bench with handcuffs bolted to the seat.
“This is our processing room and with this machine we’re able to pull off fingerprints with a simple mixture of glue, water and heat,” he said. 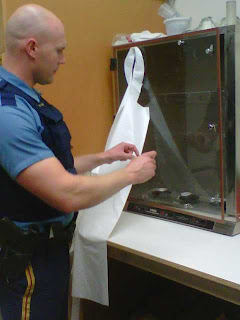 It was all so Dick Tracey and I was wide eyed at the process.
“Here’s our garage with a couple vehicles,” he said, confirming they had two K-9 units and a SWAT team.
“You’re lucky you caught me because I’m being transferred shortly,” said Wilson. He requested to be moved to an even more remote section of Alaska.
I asked him if he got his job because of his size. “I’m sure that has some part in it. When you’re out there and you call for backup – it can take anywhere from 30 to 40 minutes and in that time you’re on your own,” he said.
Trooper Wilson talked about taking command of a situation and sometimes needing assistance from people at the scene. “Whatever tools you can use to diffuse the situation,” he said.
Sidenotes:
– I had an uninspiring 8-oz can of tuna fish for dinner tonight. I opened the can, drained the water and then plated it right where it was – eating directly out of the tin like a rail-car hobo. (PIC on FB)
– Today I saw a cloud that looked like Olive Oyl flipping a pancake.
– What you don’t see behind the scenes is how I take advantage of every opportunity to network  especially when I reach my destination community for the day. The key is building up trust.
– You also don’t see how I switch my socks around when I’ve worn a hole in the toe.
– Coming through Cooper Landing I saw three bald eagles on the shoreline.
– It’s rainy and cold again this morning and I had to have a strong sit-down conversation with myself.  At first I was understanding and compassionate – then, I had to resort to some reverse psychology and tell myself  ‘if this were easy everybody would do it’ and ‘there has been nothing so far I couldn’t handle’ and ‘I better pull up my big-girl panties and embrace this thing called life.’  I’m okay now.