August 2, 2021 – Gibsland, LA Gibsland, LA is now in my rearview mirror But there’s one more video to share of the famed Bonnie & Clyde Ambush Museum.

If you’re a fan of outlaw history it is worth the stop. Perry Carter has a fantastic collection of memorabilia and documentation and he has a good eye for marketing as he’s combined the romantic history of bandits on the run with graphic art and he claims the former cafe—now home to his museum—is haunted. So he’s covered all the bases.

All he needs is to throw in one Elvis reference … but he already gets great reviews, plenty of media coverage and people from around the world come to visit.

The video shows two displays that were a little over the top with trying to relay the carnage that followed the ambush.

The newspaper clippings detailed the number of rounds fired and the arsenal of weapons in the vehicle. 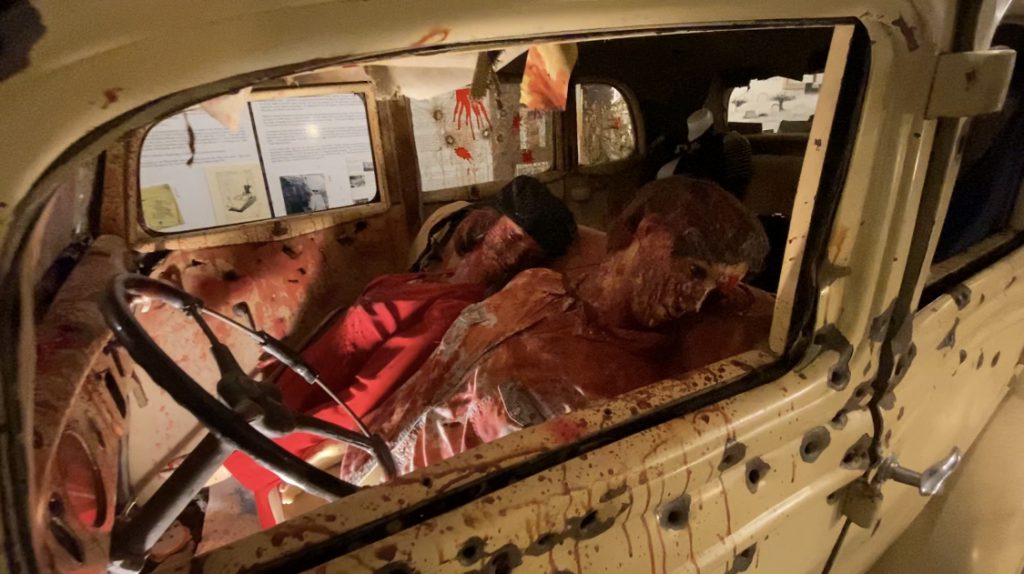 In Arcadia, LA I even found the funeral home that had ties to helping prepare the bodies.

Carr said the original funeral home where Bonnie & Clyde were taken was sold and demolished in the 1980s. “We do still have the tables. I’m not sure if those were the actual ones used but they are still pretty old,” she said.

Carr talked about the throngs of people that gathered at the funeral home even prior to the arrival of the bodies. “Everyone wanted to just catch a glimpse,” she said.

“The bodies were embalmed and then shipped to Texas for the services.”

According to Alan E. Hunter, “The Ford, with the bodies still inside, was towed to the Conger Furniture Store & funeral parlor located on Railroad Avenue downtown across from the Illinois Central train station (which is now a historical museum containing Bonnie and Clyde artifacts.) The crowds were so unruly, that the caretaker had to squirt embalming fluid on them to keep them back. Preliminary embalming was done by Bailey in a small preparation room in the back of the furniture store (it was common for furniture and undertakers to be together back then.)” Hunter-Irvington, Alan E. (2019, October 7), Bonnie & Clyde, Part I https://alanehunter.com/tag/conger-furniture-store-and-funeral-parlor/

Alan E. Hunter’s column, “Bumps in the Night”, has run on the front page of the Weekly View / Eastside Voice / Eastside Herald newspaper in Irvington on the east side of Indianapolis since 2007.

Their bullet-riddled “death car” is on display at a casino. Following the ambush of Bonnie and Clyde, a Louisiana sheriff who was a member of Hamer’s six-man posse claimed the pockmarked Ford V-8 sedan, still coated with the outlaws’ blood and tissue. A federal judge, however, ruled that the automobile stolen by Bonnie and Clyde should return to its former owner, Ruth Warren of Topeka, Kansas. Warren leased and eventually sold the car to Charles Stanley, an anti-crime lecturer who toured fairgrounds with the “death car” and the mothers of Bonnie and Clyde in tow as sideshow attractions. Still speckled with bullet holes, the “death car” is now an attraction in the lobby of Whiskey Pete’s Casino in Primm, Nevada, a small resort town on the California border 40 miles south of Las Vegas.