More than an interesting day in search of the ever-important bike box.

First, the box is a necessity to get the bike home. Research confirmed the airline would be of little help. Most stores in Italy are closed Monday, or they open after 2:30 p.m. Claudia said the store operators need a rest day. I decide to ask how they make money to stay in business. “This is why Americans are crazy,” she said, “You work yourself to death.”

Managed to find an auto repair shop that also said “bicycle” on the sign. I located a door ajar in back and went in.

I found a man at a desk, and he wasn’t grouchy at all. I showed him my note written in Italian that said I was looking for a bike box.  He shrugged, said “no bikes,” and then snapped his fingers, leading me to a corner collection of large cardboard. He found two large weighty pieces.

I cheered. It was my best option so far. The man came running out with a fresh roll of tape and I managed to get across that I’d be back on Tuesday.

‘Plan B’ on the bike is coming together with a bit of MacGyver ingenuity. 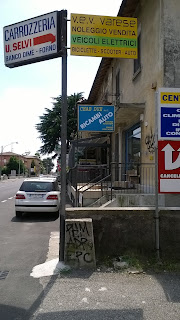 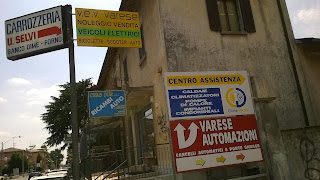 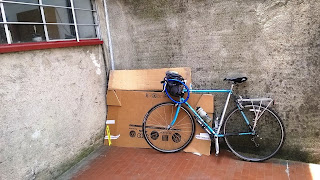 While I could cobble together a box, I was still set on trying to find the real thing.
The sporting goods store in the mall was my next target and I managed to strike gold fairly quickly. Now the issue was getting the box back to my host’s house…..
I took a page out of my TV show application for Survivor and used a pair of bungee cords and wrapped them around the box. I slipped an arm through and slung the box over my shoulder like a backpack. With a little “Wallenda” balance and some prayer, I took off for the two-mild ride home. Although I had zero visibility to my left, there was not a lot of traffic and I was lucky there was no wind. It actually went easier than I anticipated.  I’m sure I gave people something to talk about when they got back to the office as my route took me straight through downtown Varese. 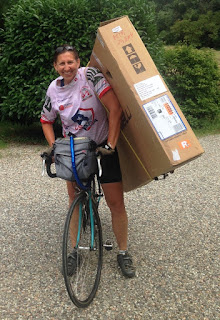 As I pulled up the driveway, I was met by my host’s 16-year-old son, Lorenzo. He had just finished clipping flowers. Apparently it was a strenuous job because he was sans shirt.
What a wonderful way to return to my Italian home!