Met some fellow travelers today in Rapallo and spent the day at the beach because their stories were better than mine.  🙂

The 20-somethings traveled in a pack. There were four of them; friends from different countries. All spoke perfect English, as well as three other languages.

“We’re couch surfing,” said Lauren. “We find lodging on line, but last night the guy lied on his profile. He said he was a naturalist, but he was really a nudist, and he was into “stuff” and only wore a t-shirt that didn’t cover his jimmies.”

“But it was cool,” said Mirandia. “We outnumbered him. I wasn’t worried a bit, but yeah, he was a little creepy.”

The girls and their friends stayed two nights. They were hitchhiking Italy on a dime thinner than mine.

“We spent last night on the public beach,” Lauren said, “It was okay, except for the mosquitos.”” 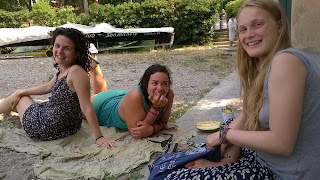 The “naturalist” story was a bit grittier than I’m portraying above. The girls confidently giggled their way through the conversation.

They took encounters in stride. “You hope for the best when you couch surf, but sometimes people lie in their profiles,” said Lauren, who was the most naive in the bunch, according to her friends.

The hitchhiking was interesting, as well. Sometimes they had to split up to catch a ride. Not many of the small Italian cars had room for four.

“We text each other to know where we’re at, and we don’t ask people for rides. We just have a lot of drama when we hold a sign,” explained Lauren.

Some intriguing insight:
One said her mother didn’t know she was on this trip.
They said it was easy to hop the train without a ticket. If the ticketmaster came around, just pretend you don’t understand his language.

They were gutsy and crafty; no worries.