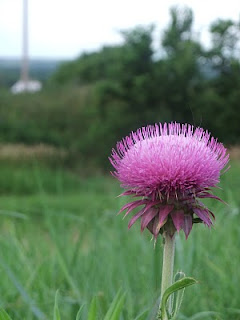 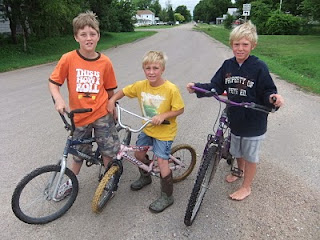 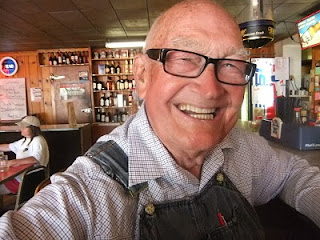 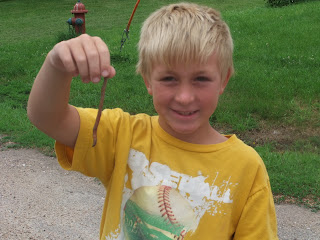 ARNOLD, Nebraska – Since leaving Denver, Col. I feel like I’ve finally got my groove on.

Biking from Sterling to Holyoke and crossing into Nebraska – experiencing towns like Grant, Ogallala and Paxton.

Ogallala had a lot of American Indian history; even the name meant something like ‘scattered one’s own.’ To me, it sounded like something the doctor would make you say while checking your tonsils. “Open wide and say Ogallala…..”

Logged about 78 miles from Paxton, Neb. to Arnold, all the while weather warnings were on the radio about approaching storms.

Coasted into the small community of Arnold and rolled to a stop alongside a gas station.

Out from behind a farm tractor walked the poster boy for Arnold – sandy blonde hair, perfect smile and a disarming drawl. He called himself Bryce and I pinched myself in the Ogallala to make sure I wasn’t dreaming.

“Now what are you doing,” he asked, coming out of the garage and into the sunlight, which totally did him justice. I relayed the Reader’s Digest version of the bicycle tour and Bryce said, “My legs can barely get me across town… and I’M YOUNG!” I decided to let that one go.

Bryce graduated Arnold High School and went to work in his grandfather’s repair shop where he started his own welding business. Dressed in a dirty black baseball hat with a Rolling Stones logo, plaid shirt, and black jeans, Bryce talked – all the while twisting something greasy and metal in his hands.

“You should be here this weekend for the big Blues concert,” he said.

“We bring in a couple semis and park them end-to-end and build a stage and it’s really a big deal. We get about 2,000 people in town.”

It was a big deal for Arnold; a community of about 685.

“Otherwise, you should come back for the big street race,” said Bryce. “We really know how to keep things poppin.”

Maybe it was the miles, the heat, the fatigue…. but for a second I must have stopped listening to Bryce. He broke my slack-jawed stare with an uncharacteristic four-letter word. “Ma am,” he said. “You need some water or something.” Bryce was coming darn close to losing his poster boy status.

“Jim’s Bar up the street has good food,” he said. “Between Jim’s and Susie’s, you stand a better chance at Jim’s because Susie only cooks weekends.”

At Jim’s I was greeted with a warm welcome by Frosty, who introduced himself by kissing me… on the mouth.

Forrest, or Frosty to his friends, was 80-something. He wore black Oshkosh B’gosh bib overalls, tennis shoes, plaid shirt and he quickly sized me up. “You’re tough as a boot,” he said holding my arm.

Frosty was retired, but ran the elevator in town for years. Married in 1949, he and his wife had six kids. Frosty’s wife died recently, but he refused to sit around and mope – he also rarely went home alone from the tavern, often leaving with his arm wrapped around a paper bag and bottle of Ancient Age Bourbon.

Across the room three women pulled Frosty into their conversation. They grilled him about his new girlfriend at the bar. I voluntarily walked over.

They gossiped about Frosty and his jokes at Rotary called “Frosty’s fabrications.” The ladies were waiting for their husbands who had spent the day golfing. “You can stay with me,” said Nancy.

After a bit more conversation we loaded my bike into Carolyn’s pickup and they took me for a tour of the canyon.

Fantastic hills of sand, and since it had been a wet summer the mounds were green with grass.

Nancy’s house was about 9,000 square feet of the best view in Arnold. Outside every window was a picturesque setting. “This has to be better than sleeping at a church,” she said.

Got on the road at 6:45 the next morning and had breakfast at the Colonial Inn. Owner Mary made homemade raisin toast. She also sent a couple pieces along with me, wrapping them in a baggie with a yellow twist tie.

– Got turned around a bit in Merna, Nebraska and stopped three kids on bikes. Reece, Blaine, and Cody were busy spending their summer pulling a plastic circle sled through the puddles around the gravel streets of Merna. “You go down that road and turn left and cross the railroad tracks and that’ll get you straight to Victoria Springs,” said Blaine… the youngest in the group. Blaine had blonde hair, a sturdy build and early confidence. I took a picture of the trio, gave them my card, and told them they could look for themselves on-line in a day or two. “I’m going to keep this in my pocket with my fishin’ worm, so then I’ll remember,” said Blaine. (I feel I’ve reached a new pinnacle in my career; my business card stored in an 8-year-old’s pocket next to his fishin’ worm.)

– Watched the July 4th fireworks in Holyoke with my two new friends, Kevin and Terry. I met them outside the Holyoke Motel. They had been out with their dogs. “This is a nice town,” said Kevin,, who lived about three blocks from the motel. We chatted, had a couple beers and then jumped in Terry’s pickup to go to a field in Kevin’s backyard and watch fireworks with a fresh mosquito population. “These are the best fireworks,’ slurred Kevin.

The next morning I stopped at the diner and my new friends were already at a table for three. Kevin picked up the tab. “Well, since you drank all our beer last night I might as well buy your breakfast.”

– Met Evelyn while looking for the pastor’s house in Holyoke. She was in a wheelchair and making a pork chop for one on the grill for the Fourth of July holiday. Evelyn invited me into the house where she rang the pastor on his cell phone. We talked about her grandchildren and her 17 great-grandchildren. I thanked Evelyn and left to find the pastor and my accommodations for the evening.

The next morning, I ran into Evelyn. “Can I pray for you,” she said taking my hand. Evelyn asked the Lord to protect me during my journey. Her faith and generosity made me cry.