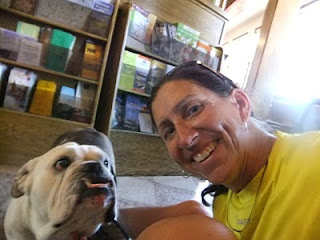 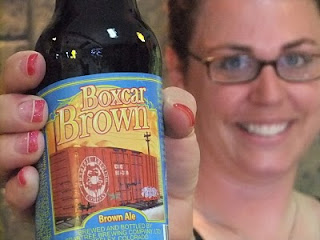 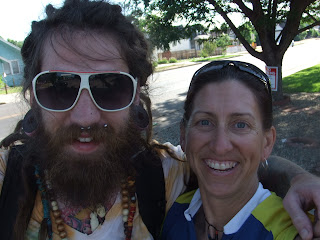 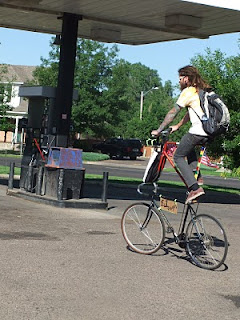 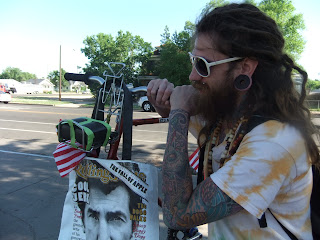 Crabtree Brewery is an independent craft brewery in Greeley run by Jeff and Stephanie Crabtree. Jeff left the corporate world four years ago to follow his dream. “The only thing I regret is that I didn’t start this sooner,” he said

Some of his creations include Boxcar Brown, Jeff’s Pale Ale, and a fantastic beer with a ginger base.

Although Crabtree Brewing has grown 40 percent over the last four years, Jeff’s biggest challenge is nudging further into a market dominated by Colorado brewing giants Coors and Budweiser.

Headed out of Greeley around 8 a.m. during the July 4th weekend and caught up to Darin who was riding a tall bike.

“I know how to weld, so over the last three days I built this bike for today’s parade,” said the 24-year-old dressed in a tie-dye t-shirt, black skinny jeans, and reddish-brown Vans tennis shoes.

Darin had a full Paul Bunyan beard, plugs in his ears the size of spools of thread and big sunglasses that screamed 1976.

His 5-and-a-half-foot-tall bicycle featured a red Volkcycle on top of his mom’s green bike. He had a cloth Rolling Stone bag with a photo of Sean Penn hanging from the handlebars, and about a dozen medium-size flags he was taking to sell at the parade.

Darin also had his Jamaican tunes on board with 6-inch speakers mounted to the front stem; he was jamming to Toots and the Mayfals.

“It’s amazing and one of the free-ist feelings,” he said about riding two-stories tall in traffic.

“I just really like riding and seeing how happy people are to see it.”

– The train depot in Greeley serves as headquarters for the Chamber of Commerce. Bill Sterling was on the clock and so was Bella, a 5-year-old English bulldog. “She’s the director of greeting,” said Sterling. Bella was a beast – about 80 pounds packaged into a 2-foot-long frame, she reminded me of a sack of potatoes with deep brown eyes and an extremely sad underbite. Bella would have been the last kid picked on the playground, so it was a good thing she was adopted by Greeley.