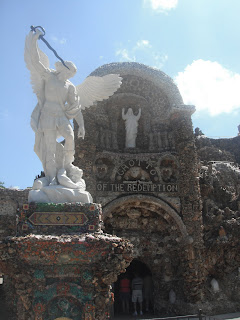 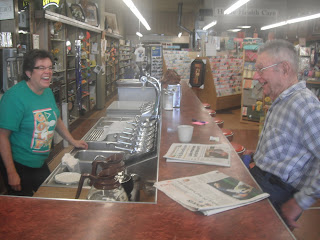 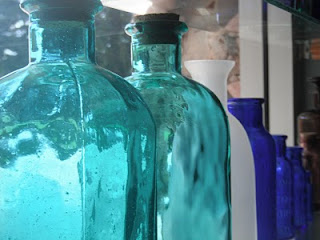 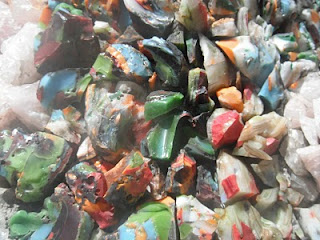 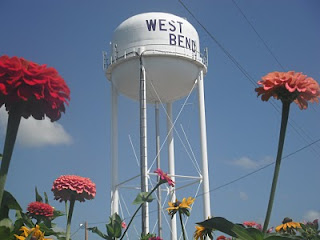 Stopped in West Bend, Iowa and it’s been a very ‘Back-to-the-Future’ experience touring the community of 800, located about 150 miles east of Sioux City and 180 miles northwest of Ames, Iowa.

West Bend, Iowa has one grocery – Kampen Foods, one blinking red traffic light at the intersection of Broadway and 2nd Street, and one community school, grades K-12.

The Bulldogs have since become the West Bend Wolverines after consolidating with neighboring Mallard School District; and ‘yes’ they were the Ducks.

The town diner is the Wagon Wheel (very Bonanza) and there’s also the County Line Cafe; the local tap is the Double L Saloon.

Streets are familiar, including Division, Broadway and Main. There’s also Rodman, and numbered streets that go up to 550th Avenue.

There’s a one-car dealership, West Bend Ford, a John Deere implement and West Bend International Corp., along with West Bend Elevator. The grain towers can be seen from any part of town.

Zinn’s Hair Styling has a candy dish comfort like BJ & Company with high-and-tight attitude like Thiemer’s Sip & Snip in Kewaskum.

Park View Inn & Suites is the Bonne Belle of the community.

Mayor Marilyn Schutz was pictured on the front page of the July 8 edition, waving to the crowd during the July 4 parade.

Inside on the second page under a column called Bygone Days… The June 20, 1940 write-up included:

The historical society In West Bend is made up of three outbuildings; a replica of a U.S. Post Office, an old school and a sod house.

There’s also a real soda fountain called The Villager and it dates to the 1930s.

Customers can sidle up to the fiberglass counter and order simple shakes, cones, and sundaes.

Albert Banwart, 92, goes to the fountain every afternoon for a cup of coffee. “Except on Saturday’s when they close at 2 o’clock,” he said.

Dressed in blue Dickies and a long-sleeved button-down shirt, Banwart has been a fixture in West Bend, Iowa since 1947. “Came here after the service, got married and had seven kids,” he said.

A farmer, Banwart worked 160 acres and grew corn and beans. “My first tractor was an Oliver 70.”

Banwart said the tractor was used; he paid $1,000 for it and recalled it was the only choice he had because he couldn’t afford a John Deere.

These days, Banwart stays busy assembling 1,000-piece puzzles. “I like the ones with tractors or farming pictures,” he said.

Banwart’s cousin makes frames for the puzzles out of quarter-inch plywood. “Then I glue them together and hang ’em on the wall,” he said.

The other mainstay in town is the Grotto of the Redemption.

Described as ‘a miracle in stone’, the Grotto covers an entire city block and is a collection of stone, seashells, petrified wood, quartz crystals, stalactites and more.

Often referred to as the “Eighth Wonder of the World”, the Grotto is the largest in the world and was created by Father Paul Dobberstein.

He began construction in 1912 and worked the next 42 years hauling in rocks from 50 states via truck and train.

Located adjacent to Sts. Peter and Paul Catholic Church, the Grotto depicts scenes in the life of Jesus of Nazareth.

Once a primary tourist attraction for the community, the Grotto appears to have gone the way of the old West Bend Outlet Mall; it now draws about 3,000 a year where it once pulled in that many a weekend.

One of the crazy stories located in a side museum talked about how Fr. Dobberstein used to keep bears in a cage at the Grotto of Redemption.

However, “after an unfortunate incident between one of the bears and a 4-year-old child in 1922, (she lost an arm) the bears were removed from the Grotto and put to sleep.”

A bear hide from one of the original Grotto bears is on display at the neighboring museum.

Adjacent to the Grotto is The Grotto Cafe with a unique menu including Sinful Appetizers, Saintly Salads and sandwiches featuring the Bishop Burger, Cardinal Chicken, Confessional Chicken Strips, Repenting Ribeye Sandwich, Pope Tenderloin and Monsignor-rite, which is a warm bun with meat fixings and cheese for $4.75.

Fr. Dobberstein immigrated from Germany. He went to seminary in Milwaukee, Wis. and his first assignment was as a priest in West Bend, Iowa. Fr. Dobberstein died in 1954.

He built the Grotto to fulfill a promise to the Blessed Mary for curing him when he was younger and stricken with pneumonia.

While Holy Hill in Washington County draws a lot of tourism and attention for religious significance, West Bend, WI has an intimate Grotto located outside St. Mary’s Immaculate Conception in Barton.

I was directed to stop at Kay’s house and she would be able to give me the green light on whether I could stay at St. Joseph’s Church for the night.

Kay lived across the street from the parish. With her children grown, her husband lost in a farming accident – Kay was a good servant to the church and a great caretaker.

“You can come over to my house for dinner tonight,” said Kay. “I’m going to put out what I’ve got and that’s what you’re going to get, see.”

She was adorable and her latest fixation was the Internet.

“My son got me this computer and if I break it, Fr. Al comes over to fix it and I give him homemade peanut butter cookies, see,” said Kay.

Hard to believe Kay was in her 80s. She had spunk and was active in her church and community. Everybody knew Kay.

“My granddaughters saw I had this computer and they said ‘Grandma, you have to get on facebook

“Write on their wall…..” said Kay, laughing at how ridiculous that sounded.

When Kay laughed, her whole body reacted. She’d drop her head almost entirely into her lap and then come up all rosey cheeked and still chuckling.

We had tuna salad sandwiches for dinner. Kay also made coleslaw and opened a can of peaches. There was a small tray of peanut butter cookies for dessert.

“I asked Fr. Al to join us so he could meet you and he said he was too tired,” said Kay, inviting me to breakfast the next morning as well.

The next day at 7 a.m. Kay already had coffee brewing, the table set for two and a couple glasses of orange juice already poured.

“I found you on the Internet last night,” said Kay, admitting she was more of a night owl than a morning person.

“I usually don’t have company, but I have my computer sitting over there and when I take a break from that I have my TV or my crossword puzzle..

“It’s like my little entertainment center, see,” she said.

WEST BEND, Iowa – Mother Nature must be going through ‘the change’ because she sure was throwing a tantrum today.

Headwinds were also strong at 25 miles per hour. It was the type of wind where flags stood at attention, fellas hung onto their hats, and birds opted to walk.

Made it 78 miles from West Bend to Rockwell.