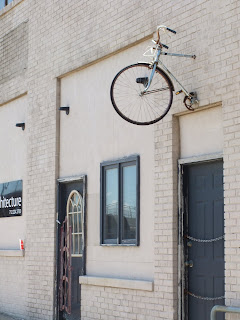 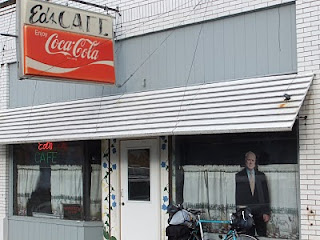 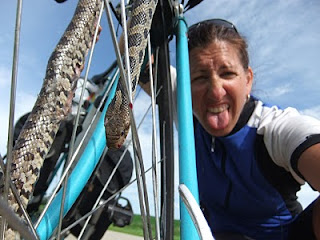 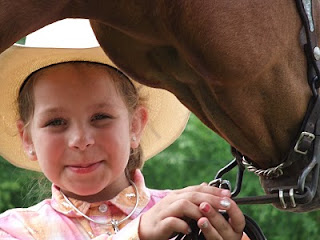 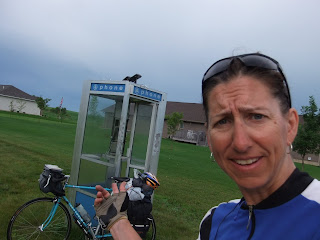 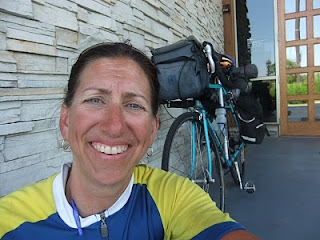 Additional bits and pieces from the road trip that didn’t make it into previous posts:

BURWELL, Neb. – Saw some real cowboys in the small town of Burwell, Nebraska. Some wore the typical cowboy hat while others had on baseball caps with a seed-factory logo.

A couple cowboys wore spurs on their boots – most, had belt buckles bigger than a toaster.

Stopped at a rodeo museum in Burwell, which was really a tavern with the best collection of rodeo posters and programs hung in frames on the wall.

The oldest rodeo program dated to August 1949 and featured a pink cartoon bucking bronco with a cowboy hanging on for dear life.

Other programs from the 1950s, 60s, and 70s featured black and white action photos of bull riding, and bronco busting.

Scattered between the programs were signs including ‘Don’t throw your cigarette butts in the urinal… it makes them soggy and hard to light.

“You might be a redneck if… you’ve bandaged a wound with duct tape.”

Most of the cowboys drank what they called ‘red beer.’ It was a 10 ounce tap glass of beer mixed with half a glass of tomato juice.

If it sounds gross, it was.

NELIGH, Neb. – Had breakfast at the Neligh cafe; conversation among the local board of directors was mostly about farming equipment, John Deere and the roads.

“They’re milling on Highway 20,” said one farmer talking in my direction.

“But you take the side road about five miles north, that’s an oil road and that’ll take you around the construction.”

Another coffee drinker in bib overalls mentioned a second possibility and then a third farmer touted several other options.

The group had as much consensus as a teenage drug deal.

Within 10 minutes I was ready to leave and a fella said, he was leaving too and did I want a ride because he was going exactly the same way…. only faster.

What started as a casual day off – turned into nice sun, a good highway, soft tail-wind and 98 miles to Jackson, Nebraska – just six miles shy of the Iowa state line.

Stopped for some food and asked a local if my bike was safe outside the tavern. He tilted back on his bar chair, took a look around the room and said, “Yeah it’s safe. Nobody in here knows how to ride a bike.”

SIOUX CITY, Iowa – Found my boyfriends Lewis & Clark again on this trip. I fell in love with the pair last year during my bike tour from Seattle to West Bend.

The Lewis & Clark Interpretive Center was fantastic with mechanical displays, detailed hand-painted murals, and a lot of interactive educational stations for kids.

The Interpretive Center focused on Sergeant Charles Floyd, the only member of the Lewis & Clark team who died during the expedition in 1804.

The 21-year-old Floyd suffered from a severe stomachache. The standard treatment was a strong laxative and bloodletting, the universal cure.

Doctors believed bloodletting was the best way to combat disease, fever, broken bone or depression. And if a patient didn’t recover, they were bled again.

There was also a display of medical tools used for bloodletting and tooth-pulling. A huge rolling-pin piece of machinery was actually used to help with constipation.

All of it made for a good excuse to suffer in silence.

Some of the hands-on displays featured a mini keel boat where kids would have to stack blocks and balance them so as not to tip the boat.

There was also a Visitor’s Journal to fill out questions during the tour such as “The expedition arrived back in St. Louis in 1806, what had explorers accomplished?”

Where’s a fifth grader when you need one.

– Took advantage of Albrecht Cycle Shop in Sioux City. The rim of my rear wheel had five cracks and needed to be replaced. Otto Albrecht II was a third generation owner; his grandfather started the business in 1924. Back in the day they not only sold Trek bicycles but Harley motorcycles and Cushman scooters. Otto, 86, took me for a tour of the basement of the shop. “She had a tetanus shot,” said one employee as we made our way down the uneven wooden stairs.

Downstairs was a graveyard of old bicycles. “We use them for parts,” said Otto. “And over here are all the new bikes people have brought in from the chain stores, like Wal-Mart.”

Otto said customers usually need a new tire or want a tune-up, but then when they’re told it’s $40 or $50 they delay returning to the shop and in many instances just forget the bike altogether. “I guess they can’t justify putting more money into the bike after they’ve bought it,” he said.

I left with a new rear wheel. Cost – $171. Value = Priceless, considering the adventures I’ve had and people I’ve met touring the states and Europe.

– Johnny Mars is the ‘famous’ restaurant in Sioux City. When I stopped, a big man in his 50s met me at the door. “Sit here, sit here,” he said guiding me by the arm and then dusting off a stool by the counter with a couple slaps of a towel.

Manuel bussed tables at Johnny Mars and treated me like a queen. He said he was originally from L.A., but moved to Sioux City because he liked the slower lifestyle.

I told him stories about the bicycle tour and Rattlesnake Kate. After I explained in detail how she killed 140 snakes and made a dress out of the skins, I mentioned that she was also married six times and struck by lightning and lived to tell about it.

“Almost makes you feel sorry for the snakes,” said Manuel.

We talked about the safety of being on the road alone, and I said ‘people just adopt me’ like in Nebraska when a family had me sit at their table for breakfast.

I had a grandma on one side and another on my right. The one old lady leaned over and said, “You’ll find we’re the friendliest in Nebraska.” The other grandma tugged at my sleeve and said, “Actually, we’re the loneliest.”

Manuel laughed so hard I thought he was going to wet his pants. Instead, he bought me breakfast.

KINGSLEY, Iowa – Kingsley, Iowa is a town that time forgot.

People park up the middle of the street, Chet’s Grocery doesn’t open until 10 a.m. on Sunday and there’s a blue phone booth sitting on the south end of town on Hwy 140.

Ed’s Cafe is the happening place. It’s the diner with all the pickup trucks out front and the cardboard cutout of John McCain in the window.

Ed was a man of few words. He went about his business behind the counter; he’d collect money from customers and put it next to the till and he was always putting water and fresh dark grounds in a big silver Hamilton Beach coffee maker.

The cafe was a serve yourself kinda place. Customers knew to take a white coffee cup off the tray and tap their own.

If you wanted a glass of water, a series of jewel red cups were next to the plastic pitcher full of ice water.

The cups were similar to what your grandma would use to give you orange Hi-C in the morning.

“We’re known for our hash browns,” said Ed’s wife, a plain woman who walked with a seesaw motion, had meek shoulders and carried heavy forearms like Popeye. “We also have homemade donuts.”

An orange cafeteria tray lined with paper towels was sitting on the front counter. Even rows of fresh warm donuts covered in a glaze of chocolate or vanilla icing sat in the open-air cafe, tempting all who walked by.

Ed made more coffee. He was an extremely thin man; his blue pants looked like they had been pulled up on a yardstick and cinched tight with a leather belt that had his name stamped in black letters and fastened with a large round Indian-head buckle.

The interior of the diner was dated as well with dark wood panel walls, sherbet orange booths and eight small circle stools at the counter that were set about two feet off the ground. It was as comfortable as sitting at a parent-teacher conference in kindergarten.

The staff went about their business – focused.

Their personality and humor was on the wall with small signs:

And the clock was a two-inch section of tree trunk. All the numbers were jumbled at the bottom and at the top the message: “WHO CARES.”

I had the best breakfast ever of two eggs, sunny side up, a piece of wheat toast, hash browns and coffee. Total = $5.26.