I’m about 20 miles outside Milan and since it’s almost 5 p.m. I figure it’s best to start scouting out a place to stay. Once I get to Milan, it’s going to be a big city and an expensive zoo. Although I still have a lot of steam left in my engine, I might be running on fumes in two hours and generally the campgrounds are 30 kilometers from where I land.

I jump over to a restaurant where men have gathered outdoors. My note is not well accepted.

I move to the library where the clerk points me in the direction of the sanctuary. 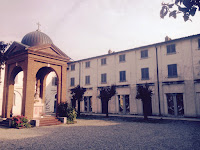 You can’t miss it,’ said the librarian. She wore a somewhat dressy t-shirt from the Hard Rock Cafe.

I pedal to the end of the street, which dead ends at the sanctuary; it’s no small outfit.

A couple were standing in the arched entryway. The woman gives me a finger wag and an audible “tsk tsk.” I pull out the note about biking for Alzheimer’s and she changes her tune and points me to an open door across the garden. 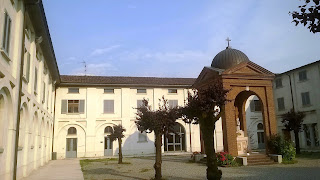 That’s where I find Sister Sara Amelia. She’s in her late 80s, dressed in a white habit and robe, with those soft nun shoes. She sends me along my way. I run into a pair of priests and the note gets another workout. Nobody has anything reasonably close to an English vocabulary, so it’s a lot of “follow me” waving.

Rev. Gabriel makes a couple unanswered phone calls, then finally leads me to a hall where I can stow my bike. 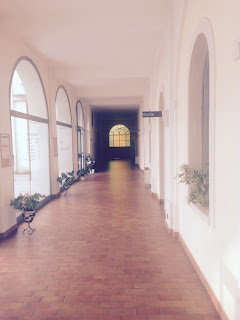 Sister Sara re-enters the picture and it looks like I’m her assignment. She shows me the bathroom, and then a small prayer room. She speaks Italian; I nod like a dope pretending to understand. She continues to lead me down the long hall and to the automated cafe machine. I think it’s sweet how she’s trying to make me so comfortable.

Sister Sara leaves and I start to unpack, but I’m quickly distracted by food. About 20 minutes later I head to the bathroom to clean up. Half finished, the door opens and sister Sara has tracked me down.

“Camera” is what it sounds like she is saying. A quick sprint and I’m by her side. We take an elevator up one floor and she opens Room 102. Looks like I have a more comfortable place for the night; bed, bathroom and Bible – what more do I need? 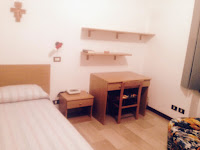 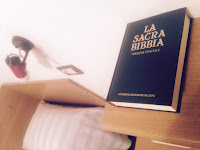 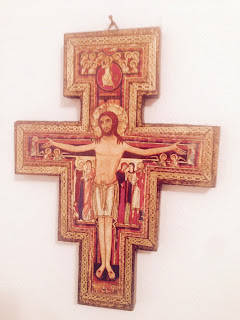 “Seven o’clock,” she says, as she points to her watch and mimes eating…then she’s off.

It was dinner. They sat me at a table by myself. The priests ate in a room by themselves, and the nuns did likewise – all behind closed doors.

A skinny guy with cigarettes on his breath served me. I was right by the kitchen. It was very “Downton Abbey.”

The Sister keeping an eye on me has her hands full.  🙂

I came downstairs after cleaning up and the priest walked by saying something obviously negative. The nun took me in another room where my bike was. She fast-talking in Italian, kind of getting exasperated, then pulls down her eye….like a spy signal.

Oh my, God. It’s the knees again. I can’t find my trusty scarf, so I get my pants.

When I walk in for dinner, the priest hangs back to give me a look, seeing if I measure up.

Dinner was hot rice soup and a hard roll. One priest, Rev. Gabriel from my earlier encounter, sat behind me. He was at a table alone, too.  I waited for Rev. Gabriel to eat first. I wasn’t going to look back, so I just listened for the clink of silverware or the murmur of a prayer – you’d think somebody would pray, right?

I said a prayer in my head. Soup was getting cold.

No conversation. It felt like I was eating in the principal’s office. He could watch me. I felt it a violation to snap a photo of my food at that moment.

After the soup, the main course was a cut up potato, a halved hard-boiled egg, and a bit of raw tuna.  Feels like a Friday menu that’s desperately close to running out of ideas – but I’m not complaining.

This is a truly unique experience, and it isn’t over yet.

After dinner, Sister Sara stumbles upon me in the courtyard. She points out things of note and I take pictures. Sister indicates she should take a photo of me in front of the Blessed Virgin statue. We work through a couple mishaps, some shots of unsuspecting feet and the push of a wrong button. Finally, sister gets it right. We review. She’s clipped off 18 shots of me; the last few look like I’m telling a kid, “OK, that’s enough. Give me the camera now.” I take a short video and play it back for Sister, and she is beyond thrilled! It’s a true reaction and I know she’s never seen cellphone technology before.

Sister takes me for a tour of the chapel and shows me some unique paintings, including a wall mural of Pope John Paul. She seems to indicate he visited the sanctuary once. Here is a short video of my tour:

Thundering in the distance; am I being warned about this post?