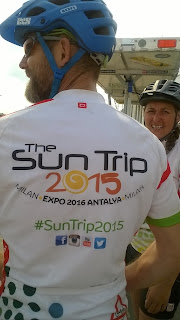 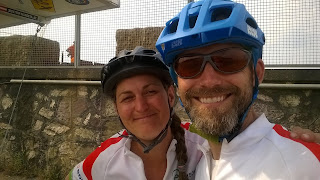 Have you heard of The Sun Trip 2015? Me, neither. But I happened upon them today. The team of Anita Burgholzer and Andreas Hubl passed me today just outside of Forte de Marmi, and they were flying.

The couple from Austria are part of a 20-team tour that uses the sun to power their electronics on the tour. “We’re going to Milan, Italy to Turkey, and back to Milan, but we’re going on to Kazickstan,” said 39-year-old Andrea. 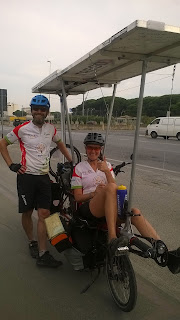 The couple, both self-employed, paid $400 to take part in the tour. Andreas leads mountain bike tours over the alps and Anita, 34, is a graphic designer.

The couple rides a 16-speed tandem. Anita is a recumbent in front, and Andreas is in the back. They average 160 miles a day, which is a pretty fair clip.

The tour started Saturday, June 6. They expect to finish in August. Neither are fluent in Italian. “We understand it; we just don’t speak it. We speak Spanish, so that helps,” said Andreas.

Their bike is decked out with sponsor logos, a generator for solar power captured from their roof, an industrial pump, spare tire, and they’re both dressed in spandex racing jerseys. The race is taking full advantage of social media and all teams are tracked live on YouTube, Facebook and via GPS.

So far, the couple have crossed the alps. “We did not just want to ride the coast,” said Andres. The couple anticipate more hilly/mountain challenges in Greece and Turkey.

Although part of an organized tour, the couple are on their own to find camping nightly and fix problems along the way.

“It’s a great adventure,” said Anita, “And it only just started.”

TIDBITS:
–Interesting to note that while we were pulled over and chatting, another pair of travelers joined the conversation. Paul, 22, was from Croatia and had been on the road seven months with his friend, Flavien.
–Writing by the bathrooms where there are no flies. :-/