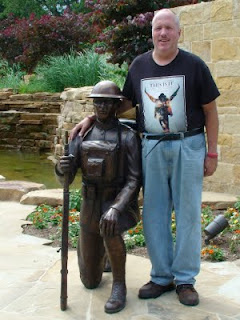 Tim at the Irving Veterans Memorial 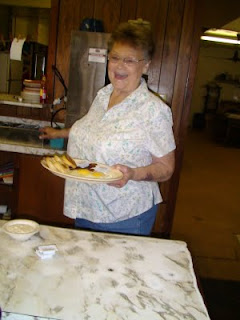 Doris, from the Town Cafe in Italy, Texas
– she made my breakfast that morning –
two eggs and salsa.
Doris said she’d have to quit the diner soon but didn’t know what she’d do with herself.

Look at how TALL this corn is! Photo taken just outside of Venus, Texas. 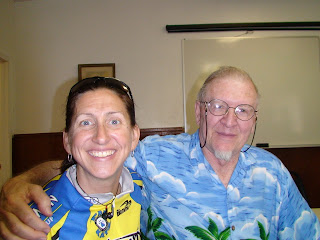 Bill from church outside Arlington.
He spent the lunch hour talking about his service in WWII and Elvis.
***

Midlothian, Texas – If a person at a library offers directions with the caveat, “I’m really bad at directions,” that’s often an honest, spot-on admission.

I stopped at the public library in the very small town of Venus, about 35 miles south of Dallas.

I say late because normally I find a place to stay by that time and with darkness around the corner and miles from my destination city, I was starting to feel a little nervous.

I confided in the librarian I was looking for help and a church or safe haven for the night. She suggested I try the Cowboy Church off Highway 67.

Wow – Cowboy Church, this must be Texas.

I had been biking much of the day on Highway 67 so when the librarian said ‘you go over a bridge and it’s on your left,’ I didn’t equate bridge with a highway overpass.

About seven miles out of town the sheriff’s deputies made it clear. I was rerouted again – with an escort.

I’m such an embarrassment for bicyclists and the state of Wisconsin. (Mind you, during these situations I tell officers I’m from Illinois.)

Off the highway and through a mile of forest, I’m completely lost. The road empties onto a main street in the small community of Midlothian.

I stop at a park and seek advice from a series of football moms sitting in folding chairs along the sideline.

All of them point to the parking lot and a man sitting in a Ford Explorer.

It’s Pastor Bruce Smilie from Crosspointe Church and he allows me to spend the night in the youth room at his church.

– Spent the day visiting Dallas Stadium and Texas Rangers ballpark in Arlington. Small world – on my way into the stadium I saw a number of Brewers shirts and questioned the group, which ended up being from Wisconsin Lutheran College. Once inside, Heidi behind the front desk said she was from Campbellsport.

– Spent the night at a tiny First Baptist Church in small town of Italy. Found the pastor’s daughter, Ronda Cockerham, working at City Hall. She let me into the church and handed me a basket of soaps and a towel. I took the gift more so as one of hospitality than a subtle message that I had much of my day’s journey stuck to me.

– Italy’s claim to fame is it’s the hometown of Dale Evans.

– Passing through Waxahachie I took a tour of the Catfish Plantation. The restaurant, set in a home built in 1895, is said to be haunted, and has been featured on several national shows, including the Travel Channel and the Discovery Channel’s Ghost Lab.

Sitting on the front porch, I paged through hundreds of letters in a three-ring binder – testimonials of guests who witnessed ghosts. Sightings included things like “While I was at Catfish Plantation the doors attacked me, my food was floating, the lights were flickering,” and Carolyn Horsak wrote that she was “eating my shrimp dinner when I picked up a shrimp to dip in the sauce and noticed there was already a bite taken.”

“That book’s a bunch of hogwash,” said a woman who walked through the porch like a bull in a china shop with an opinion.

Shane Sparks was the manager and executive chef at Catfish Plantation. “So many of those people don’t know the difference between a breeze blowing through the building and a ghost.”

Shane was a large, saucy woman with feathers dangling from hoop earrings. She was also on a mission to set the record straight.

“We do have ghosts, but so many people come here thinking they’ll see one – they freak themselves out,” she said.

Matter of fact, many customers got carried away, especially in the bathroom.

“We had to put up a sign “No playin” because people would be screamin’ in the bathroom if we had a short circuit and one of the light bulbs would flicker.”

Shane rolled her eyes – she had little patience for amateurs.

“I’ve actually seen the ghost,” said Shane, running through a list of examples about how a ghost would really push open a door or appear in a picture. “One of the ghosts actually slapped my 13-year-old daughter on the arm.

“I wasn’t mad, because we all felt like giving her a crack that day – it’s just that the ghost beat us to it,” she said.