These fellas made my day today.

I was getting close to Milan, but it was late. It’s easier to stay in the small towns with welcoming churches and more affordable room rates. I took a random turn and ran into this fruit stand with a ridiculous pile of fresh cherries. 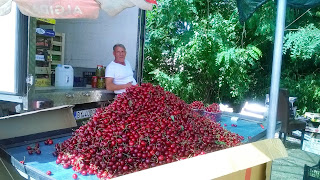 Antonio welcomed me into the shade. He grabbed a handful of cherries and shoved them into my hands. I had to pull them up to my chest just to hold them all.

It was “charade conversation” at its best. I got the message across about bicycling Milan to Genova to Rome to Pisa, up to Parma. Antonio held his head and made the finger-circle gesture for crazy. “Mama Mia,” he said, then invited me to a fruit snack.

Constantine was his wing man. The pair offered me shade, a place to sit, and using a pocket knife, he sliced open a ripe melon. Constantine handed over a full liter bottle of drinking water. Antonio was bold and old. He asked my age, if I was married, and whether or not I had children.

He had seven children and was 71 years old. Constantine straightened signs that had fallen down in the wind. He acted as a translator and, when he stretched, a big hair watermelon belly fell out from under his shirt.

What’s been amazing on this trip is the people that have the least seem to give the most.