Menu
Menu
“In Tennessee where I grew up, there were animals, farms, wagons, mules.” – Tina Turner
CROSSING INTO TENNESSEE
About a mile before the Tennessee state line I visited the Whistlestop Cafe; a small diner of six tables at the back of a gas station.
I ordered two eggs, toast and a sample portion of fried green tomatoes. My every move was observed by a little girl in a pink iCarly t-shirt.
Gracie, 7, was on summer vacation and already bored. She sat across from me, head in her hands, answering my questions with a thick Alabama drawl.
“Fishing” was how she planned to spend her summer. “We catch bass mostly. My daddy said I caught the biggest bass he’s ever seen,” she said.
Gracie spoke with matter-of-fact confidence.
I spread my hands for an example of size measurement and then my arms. Gracie shook her head and said she couldn’t remember but “her daddy said.”
The conversation turned to biking. I gave her my business card and told her where to look for stories about the tour.
“This your phone number,” she asked. “I’m going to give you a call and then we can go biking.”
She was adorably sincere and quickly corraled by her mother to ‘stop bothering the lady.’
These quick encounters really make the tours a memorable experience. 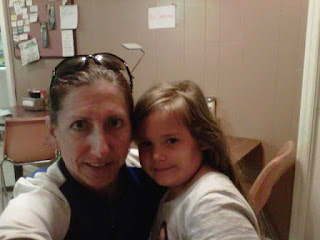 Meet Gracie….
The people I meet
Crossed into Tennessee on Tuesday morning around 10 a.m. and got twisted in a traffic jam of thoughts.
Safety is top priority, but it became quickly obvious that The Volunteer State never consulted with bicyclists when designing its roads.
The county roads have a narrow shoulder with a rumble strip dropped right in the middle, that forces bikes back into the one-lane of traffic.
With my large blue marker and notepad I scrawled a simple note, ‘HELP – RIDE.’
I was stuck in a hot pocket, with a challenging climb ahead when Aaron came to my rescue.
He climbed out of an old white pickup; bare feet, a straw hat, blue jeans and an awe-shucks attitude. 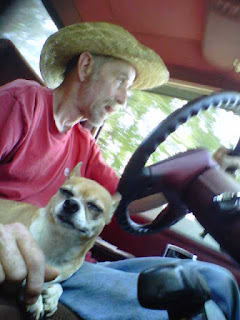 Aaron and traveling buddy
Aaron was in his late 60s but looked older. Skinny and hunched over at the shoulders he looked like he’d creak when he walked – possibly a combination between a stroke and Parkinsons.
“I’ll give you a lift over the next eight hills,” he mumbled.
We loaded the bike in the bed of the truck, left the tailgate down and I hopped in front.
“This is Cricket and the other one’s Tinkerbelle,” said Aaron about his two nervous little pocket/purse dogs that had already called dibs on the front seat.
A decent enough guy, Aaron talked and talked, but with the windows open and my eyes glued to the passing hills I didn’t understand one thing he said.
He had a very ‘King-of-the-Hill’ speech pattern. I simply smiled and nodded.
Those seven miles ended quickly and that’s when I met Perry.
He was driving a red Dodge Ram pickup and I managed to snag a ride from him into Savannah, TN.
Perry was 71 years old. He had a pile of loose tools riding shotgun so I was resigned to riding in the back with my bike. 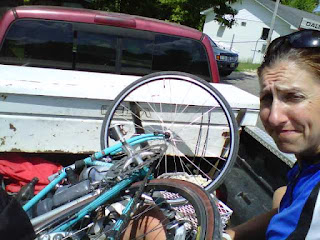 Me and my bike in the back of Perry’s pickup
After loading the bike I climbed on board and buried my bottom into the middle of a spare tire. My feet were wedged between an array of plastic jugs of oil, an old shoe, wood chips, stray rocks and a WHAM-O Slinky.
“Somebody pulled my door off so I’ve got to tie it shut with the seatbelt,” said Perry as we  slowly got underway.
With the heads’ up on the door, I put little trust in the tailgate. Rather than lean back and enjoy the ride, I wedged myself a bit further into the wheel and hung on.
It was exhilarating; I hadn’t ridden in the bed of a pickup since I was a teenager at my grandparents in Gays Mills.
We crested one hill and Perry pulled over at a gas station for a sandwich.
“Be just a minute,” he said, walking toward the building leaving the door to his pickup swung wide open.
Perry returned about 10 minutes later with two burgers wrapped in tin foil. “We’ll eat these under the tree,” he said handing me an unexpected lunch.
With that we stood in the shade of the tree and ate our homemade hamburger with a thick wedge of tomato, onion, lettuce and a combination of mayonaise and mustard.
Perry had a thick Alabama accent, wild gray hair that hadn’t seen a comb in about a week and a mean scar on his nose that looked like he had been kicked by a horse.
Perry talked about his health, diabetes and how he “quit the insulin and fired his doctor.”
Pretty soon we were back on the road. Perry’s truck listing to the right and riding the rumblestrip most of the way into Savannah. 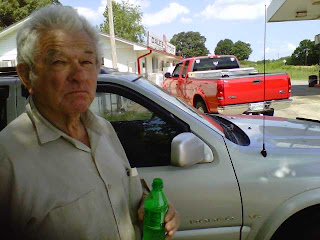