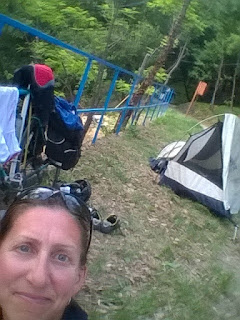 Spent the night at a campgrounds just south of Genova. I found the hills on my way – the camping is two kilometers above the primary road.

I stopped and asked a man if I was halfway there. The sweat was streaming down my face and stinging my eyes. He says “yes, yes” and then made a muscle with his arm and said, “You can do it. Strong like bull!”

Camping for one person is €6. It’s a sweet bargain for a safe place to stay. If you want to put up a tent it’s another €7. I asked the guy how that worked. “If you don’t have a tent and want to sleep under the stars, it’s still another €7,” he said. 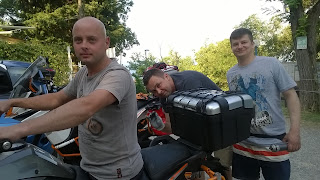 I met three motorcyclists from Poland; they camped next to me. American movie stars they noted were Al Pacino and John Travolta. Music? “We no like Justin Bieber.”

They heard of Oprah, but not Ellen. They did not know what a Kardashian was and when I tried to explain Bruce “Caityln” Jenner, they really did think ‘crazy American.’ 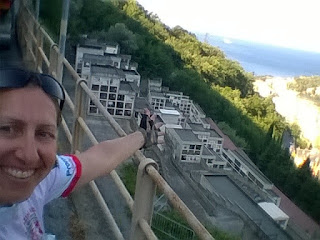