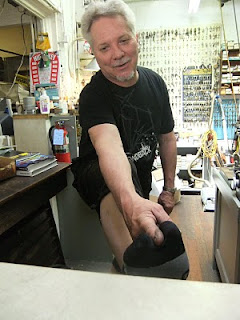 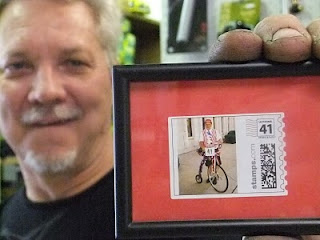 GREELEY, COLORADO – Pulled into Denver via Greyhound at 6:30 a.m. Had my bike unboxed and put together and was on the road within a half hour.

Found the fabulous South Platte River Trail; a wonderful paved trail just outside Denver that parallels the river as it ribbons north. Known for birds and wildlife, the Platte River puddled along in brown fashion to the east of the trail. If the water didn’t provide enough direction, the aroma (read “smell”) of the river let you know it was still right there.

On the other side of the trail is a five-foot-high wire fence. The fence is woven thinly enough that small white butterflies could easily pass through the webbing, yet feathery seeds of cottonwood could be caught in flight and delayed a day.

Forty-two miles up the road I spent the night in Brighton. A bit rundown from being on vacation a week, I needed some motel therapy and a chance to regroup.

The next morning, I made my way north on Hwy 83 to Alba; took a break in Greeley and stayed.

Don Eckhardt at George’s Bike Shop on 7th Street was a much-needed distraction. Don was third generation owner of the store. “My Grandpa George opened this in 1937 with P.C. Mann,” said Don. P.C. had a gun shop and sporting goods store in the front and Don’s grandfather ran the bike shop in back. In 1937, George bought the whole building. The shop featured well-worn hardwood floors and high 30-foot ceiling. In the 1950’s, George’s Bike Shop was all about bicycles, but in the 1980’s there was some diversification with lawnmowers and chainsaws – then locksmith work and gun-smithing.

“My grandfather drilled all the safety deposit boxes in town and taught himself how to temper metal,” said Don, as he worked in the repair shop at the back of the building with a lathe to fix a shim on a seat post. Don was 58-years-old and had a simple salt-and-pepper taste in fashion. His short-cropped white hair, mustache, and goatee were set off by a black Diamondback t-shirt, black knee-length shorts, black bicycling socks and SixSixOne bicycling shoes.

“Been working here going on 41 years now,” he said, pointing to newspaper photos of his father, who had been in the business 50 years. His grandfather – famous for riding unicycles – worked until he was 72.

The workshop in the rear of the store was an organized mess of busted bikes, piles of parts and years of family memories. “Up there on the wall is the first skateboard my dad tried to kill me with,” said Don, pointing to the relic from 1959. The skateboard consisted of nothing but a slab of wood and wheels from an old roller skate. “The skate was cut in half and I could really make that baby turn,” said Don. “My dad showed me how to go down the driveway. He ended up falling and chipping his elbow,” said Don, with a little laugh. “He didn’t show me anything after that.”

Other interesting items littering the workshop included a green banana bicycle seat, a pile of inner tubes that completely rendered a chair useless, and a line shaft with a three-phase motor. “My grandfather bought that line shaft from a feed store across the street in 1925,” said Don. “I can use it to run an air compressor, drill press, lathe, grinder, anything a belt will run – I can even run an old key duplicator off it.” Don said the line shaft helped him keep his bills down. “Uses a dollars’ worth of electricity a month,” he said.

Overall, George’s Bike Shop was making it in the down economy. “If you fix stuff, they find you,” said Don. “If you repair stuff, they dig you out of the woodwork.”

Don just finished fixing a bunch of bikes for the local daycare. “It was a pile of junk is what it was,” he said.

“If I depended on sales, I might have to do something different. That’s why I got this all, because I can repair stuff.”

Remembering back to his first bike, Don said his dad gave him a Royce Union sidewalk bike with large rubber tires. “It was hard rubber, like on a tricycle – difficult to ride.” Don described the bike as “ugly red” and guessed it was already 10 years old by the time he got it.

“My dad actually built a 12-foot unicycle with a 12-inch wheel so he could show the ‘carnie’ guys how to ride.” Don’s dad grew up a block from the railroad track in Greeley. In the 1930’s, when the train came through town, it would stop and a carnival would set up. A framed yellowed newspaper clipping showed Don’s dad on a unicycle, riding down the aisle at the store.

Piled up in the back of the shop were a couple of weary Kawasaki motorcycles and a Honda or two. “Part of the fun… is getting hurt,” said Don, as he walked to the back of the shop and took a long swig from a can of Dr. Pepper. “I got 30-years-worth of injuries.” “Broke my neck, my ribs, my legs, my sternum,” he said, pulling his t-shirt tight against his chest to show me the disfigurement.

“Tore my bicep and got this elbow all cut up. I broke my toes; matter of fact I can hold a pool stick between my toes now.” And he showed me… Taking off his shoe and putting his sock foot up on the counter Don put his pointer finger to the right of his big toe. “Ya see,” he said, with proof.

I actually never had any doubt, but now I was lucky enough to see Don’s toe trauma and I was convinced he was held together by an array of pins and titanium plates, and may be able to perform a solid break should we be teamed in a pool game later that evening.

– The train depot in Greeley serves as headquarters for the Chamber of Commerce. Bill Sterling was on the clock and so was Bella, a 5-year-old English bulldog. “She’s the director of greeting,” said Sterling. Bella was a beast – about 80 pounds packaged into a 2-foot-long frame. She reminded me of a sack of potatoes with deep brown eyes and an extremely sad under-bite. Bella would have been the last kid picked on the playground, so it was a good thing she was adopted by Greeley.

– Greeley has a population of 90,000 and last week country star Keith Urban was in town at the 88th Annual Greeley Stampede. Tickets for the show topped out at $69 apiece. Cinderella and Warrant headline at the Stampede Arena tonight.