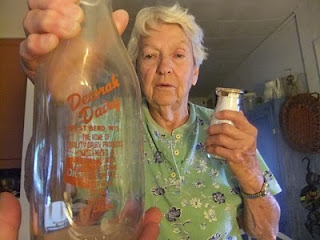 RAYMER – One of the most amazing things on this tour has been the Wisconsin connection – the number of people I’ve met who are from Wisconsin.

Bob in Bishop ran the Tree Motel. He was originally from Columbus, Wisconsin.

“I miss the change in seasons,” he said, as a drop of sweat slid down the side of his nose and hung on his upper lip.

While bicycling in a state of confusion trying to get out of Greeley, another biker turned around and helped guide me in the right direction; it was Mike from Wauwatosa.

He returned to Colorado because he had graduated from college in Denver.

Just outside Briggsdale there was the small Crow Valley Diner. Helen made buttermilk pie and a customer ordered a hamburger with a clucker berry on top.

Within a half hour the owner of the cafe introduced herself – Ruth Harding from Green Bay. “I lived in Green Bay seven years and left when it was Lombardi’s last year with the Packers,” she said.

Up the street about 20 miles I found another Wisconsin connection, Doris Williams. “Most people will remember me as Doris Webster. Just tell them I was in parades in West Bend with Ernst Frankenberg,” she said.

Doris, 81, was born in West Bend and lived there until her senior year in high school when her family then moved to Beaver Dam.

“My dad ran Decorah Farms Dairy and we lived at the bottom of the hill at Decorah and Main,” said Doris, trying to recall stories from her past.

“The blacksmith shop – was it Schloemer Brothers…. I used to take my pony in to get shoes.

“I was five or six years old and always been into animals and my dad showed cattle at the Washington County Fair when the fair grounds were off Highway 33 up behind the West Bend Aluminum Company.”

Doris currently lives on a 900-acre ranch with 15 horses, cows and about 30 farm cats.

She’s a spitfire and says what’s on her mind. A woman with an opinion, “I’ve been called a meddler,” she said with conviction.

Doris is well known across Colorado having served on just about every state and county committee, school board, highway commission and council in the area.

“Dad had the first home delivery of milk and he started Golden Guernsey for Ben Ziegler.”

“I grew up with the dairy in the basement of the house and in the 1940s the dairy farm was built.”

At 15, Doris went to work for Bob Rolfs and was a special sewer at Amity. “They used to come in with raw leather and they’d cut pieces for us. I really didn’t like that job,” she said.

Doris remembered the Dewey Drug Store and the Cooley Box Factory which “made round cheese boxes.”

“One day at Sheldon Grocery there was a skunk on the landing and they came over and said ‘could Mister Webster do something’.”

“So dad left with a butter box and took it, closed in on the skunk and got it and put that box in the milk truck and brought it to the country.”

Doris laughed about the old-time drama of West Bend.

The Geib Hotel, Merrimac Theatre, the Masonic building and McLane grade school were all mentioned as points of reference.

“There were more taverns in that town when I grew up,” said Doris, recalling Gonrings tavern.

“I remember an ice cream shop and grocery by the south edge of downtown and east, across the bridge by Cooley’s and Enger Kress.

“There was a dance hall that was also a roller skating rink and Montgomery Wards – or was that Sears? Boldt’s Drug Store… and they used to have a big Christmas tree downtown on that triangle with Santa,” she said.

In 1996, Doris was named Colorado Cattlewoman of the year. In 1968 she lost her husband to a drunk driver.

With spunk, Doris told the story about how her horse saved her life. “We were in the field trying to get this heifer bull back home and he turned and charged the horse, pushing us backwards up a hill.”

Doris was thrown when the horse fell and that’s when the bull came at her. “His horns were spread wide enough they pierced the ground on either side of me and the bull pushed into me with his head.”

Doris remembers little after that; she said her horse came around and kicked the bull, chasing it away. Her horse then stood over her, waiting to go back to the ranch.

That was 30 years ago, when Doris was 51. “I didn’t break any bones – just got the wind knocked outta me and fuffed up this knee a bit,” she said.

Asked what she missed about West Bend, “The fish fries on Friday night. We’d go to Port Washington,” she said.