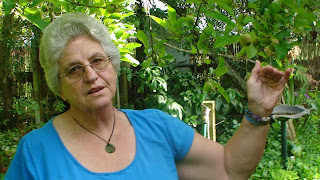 Ruth in the backyard showing me the bird collection

Tuakau, New Zealand – Dec 31, 2010 – I’ve had a streak of good luck lately as New Zealander’s have stepped up and adopted me for the night.

In Hamilton, Sue was bringing me coffee at the Garden Cafe in the Town Centre and we started chatting about the tour. Moments later her husband brought me a beautiful breakfast of scrambled eggs with chives, a side of buttered wheat toast and a couple wedges of tomato and avocado sprinkled with alfalfa sprouts. “You can stay at our home tonight,” he said, setting the plate down in front of me.

In Huntly, while searching for a church I stopped a woman on the street; Shirley wracked her brain for the name of a local pastor and then invited me to her home so we could look up the number.

“If you’re from Wisconsin, do you know of a city called Racine? I have a pen friend there, her name is Carol,” she said. Shirley found her “pen friend” in a magazine and they had been corresponding for 40 years. Shirley turned me on to minister Dorreen and her husband John, and they took me in for the evening. John was a largely unrecognized authority on everything… too bad I had such a difficult time understanding him. Think Mush-mouth from Fat Albert and the Cosby kids and then throw in a New Zealand accent – and I’m being nice. I really concentrated hard when John spoke. I only caught myself daydreaming twice – once was about when Sizzler restaurants were popular and the other was when the Banana Splits were on TV.

John talked about his trip to Montana and his upcoming bicycle tour. He had a powerful memory, although highly inaccurate, according to his wife. John was so hospitable he even went so far as to grab his purple mountain bike and helmet and guide me out of town.

In Turakau I met Ruth outside the public library. We both complained a lot about the library being closed the next four days, then Ruth said I could stay the night at her place. Ruth’s home was like an aviary; birds were in cages the size of a shed. Inside the garage there were several cages of Bourkes, canaries and an Indian Ringneck named Sweetie Pie. “I have geriatric chickens,” said Ruth about the motley crew of aging birds. “I get a random egg here and there, but mostly they’re living the Sabbath of their life in my backyard and loving it.” Aside from the chickens there was an off-white budgie, a yellow Cockatiel and an Eastern Rosella, which looked like a bright red parrot.

There were fantail pigeons which opened the day with a morning-dove coo; and a pen full of white doves. “I let four of them go during my husband’s funeral,” said Ruth. “Three of them returned home the next day and the fourth didn’t come back until my husband’s ashes were turned over to me; that was four days after the service. “It was weird,” said Ruth lowering her voice like she didn’t want the gods to hear.

– Went to donate blood in New Zealand just to see how their system works. I never passed the iron test. It’s nice to see both the US and Kiwi set-ups are broken. Also interesting, the New Zealand nurses didn’t wear any gloves.

– Some trendy lingo in New Zealand includes: brilliant and lovely instead of nice, keen, heaps, cool (pronounced kuhl), the letter ‘Z’ is pronounced ‘zed’ , lollies are chocolates and a bicycle is referred to as a push bike.

– The other night while staying in at St. Andrew’s Quality Inn and Suites I ate pineapple out of a can – mostly due to non-accompanied travel and impatience.

– Stopped at Candy Land on my way north out of Hamilton. The store was rather Hasbro but the staff was very Willy Wonka; they were all dressed in pink bib overalls. It was like putting a big farm girl in an Oompa Loompa. Queen Candyland: a bit scary with a full-on crown, pink painted cheeks and a decorative purple cape for picture taking. She was like something you’d see when you were high on mushrooms; at least that’s what my friends said.

– Kiwis are quick to offer tea or coffee. Rare is “pressed coffee” offered; more often than not it’s instant. The water is normally inferno hot.

– When you take a bus in New Zealand there’s often a “comfort stop” because there’s no bathroom on the bus. After three hours when everybody piles out I notice the attire is nothing but crop tops and low rise jeans. It is the holiday here in New Zealand but visually it’s like a landscape of Joe the Plumber.

– Bicycled to the Waitakaruru Arboretum; it’s New Zealand’s largest outdoor sculpture gallery located on 42 acres in an old quarry. In 1991 John and Dorothy Wakeling started planting about 400 trees each year in an attempt to enhance the existing landscape. Dorothy, by the way, went to Beloit College in the 1970s.

– It’s day 21 for Baby Jessica, the nickname I’ve given my lost luggage, and at the last public library/Internet stop I received word from Virgin Blue Airline that my luggage has arrived in Auckland. Although joyous, I’m highly skeptical. I will be in Auckland shortly and depart quickly after that. I told the airline to have a competent person sit on my luggage until I arrived to claim it in person. A friend of mine said my approach was as gentle as a punch in the face.

– Downtown Pukekohe and Donna Summer’s “Hot Stuff” is playing on the public speakers followed by R.E.M.’s “Night Swimming.” There’s a kiosk at the end of King Street with a bit of history detailed in black-and-white photos. Pukekohe’s first motor car arrived in 1911 and belonged to Mr. Berridge. The vehicle used to scare all the horses in the county, as well as children. The Council was called upon to do something, so they passed a resolution that the car be restricted to speeds of 10 m.p.h. A member of the Council sprung to his feet and said the restriction was ridiculous as a donkey could travel faster. The mileage was fixed at 15 m.p.h. The car could be heard from a mile away, which gave pedestrians a chance to take cover and those already mounted on horseback to get into the side streets. “I can tell you the ride through town created quite a hubbub,” said Mr. James Pollock, 86, whose memoirs were tape recorded in 1962.