New York – Finally some down time. I’ve used it to take a brief nap and then pen some ‘thank you’ cards. People have been so generous and supportive of the tour and the cause. It seems everybody has a link to Alzheimer’s or dementia.

I had the stamps, envelopes, and addresses and, while at JFK airport in New York, thought I’d send them off before flying out.

“No ma’am, we don’t have any postal at the airport,” said the attendant at American Airlines.

And so it went. I asked a couple with luggage if they were remaining in the states and if they could mail. They were off to Europe, too.  “Just keep asking,” said the small woman with a backpack.
I approached an officer. “Ever since 9-11 they took that out,” he said. 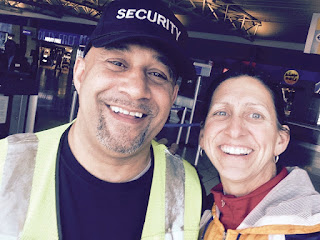 The officer told me to keep asking, too. He said it at the same time the message came over the PA about being aware of people asking you to take things.

I then asked a security guy named Hans. “I’d be happy to help,” he said. “As a country we’ve gotta get past this 9-11 thing and start living our lives and helping people rather than living in fear of each other.”

Today, Hans is my hero!