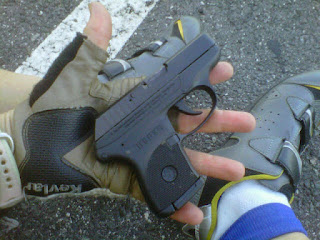 The Villages, FL – Pulled into Billy’s Cafe in The Villages on Sunday morning. Had about 20 miles in after leaving Leesburg around 6:30 a.m.
My primary goal is 1) newspaper and 2) nutrition; a man sitting alone in the first booth had both.
Inviting myself to sit down, I introduced myself to Colonel Conrad. His Sunday paper was still freshly folded and he seemed a little taken aback that he had an instant breakfast buddy – but, he welcomed me.
First thing he said was, “Wisconsin, huh? You guys just had yourselves quite an election.”
Col. Conrad stayed current and I liked him already.
Dressed in a sleeveless Harley-Davidson t-shirt, square wire-rim glasses and a blurry blue tattoo on his shoulder, Sgt. Conrad spoke with the confidence and directness of a military man.
He spent 30 years in the Army in Vietnam and Korea, had two kids and was getting ready to celebrate his 50th wedding anniversary.
“I’ve self-published two books of poetry and I’ve taken the letters my wife wrote me while we were courting in college and I’ve put those in a poem; it’ll be my gift to her,” he said.
Col. Conrad was like Chuck Norris wrapped around a bowl full of kittens and yarn.
Our conversation ran comfortable regarding politics. He talked about the death of his adult son, a body builder who died of a heart attack after experimenting with cocaine, and then Sgt. Conrad asked me if I was traveling with protection.
I told him I traveled with great faith. He looked at me and said in official Army, “That’s NOT what I’m talking about.”
I knew what he was talking about. I told him I had pepper spray and that obviously didn’t cut it.
After breakfast Col. Conrad had me walk to his car and he gave me a gun. (I’m still shocked.)
“Let’s get away from these windows and I’ll show you a couple things,” he said, heading toward the classroom behind the restaurant.
We used a line of newspaper boxes as our desk. Col. Conrad released the clip, then showed me the safety and how to reload. The gun danced easily in his hands.
Then he looked up. “Wish we had a firing range,” said Col. Conrad. “Tell you what – when you’re in a desolate area pull off to the side of the road, walk into the woods, and just fire a couple rounds to get the feel of it.”
Oh my God, I felt so gangster.
“This will make me feel a whole lot better if you take it,” he said. “If you want to return it, that’s fine; otherwise, keep it – I have more.”
And with that I was packin’ heat.
I am not familiar with guns, never toured with one, and had a million questions racing through my mind.
Do I need a permit? How about a safety class? Actually, my primary concern was about accessorizing. I needed a holster and something that would be sleek with my spandex.
Tidbits
– With temperatures in the 90s I’ve been drinking a gallon of water a day.
– Florida is a dedicated retirement community; flea markets open at 6 a.m. There are a lot of billboards for plastic surgery and one that read ‘Buy a house – get a free vehicle.’ (It was a golf cart.)
– A gallon of regular unleaded is about $3.21.