Off to work today; leaving Pisa.

Stayed at a very nice campground, and that’s code for “they had toilet paper.”

As I was packing, two little blonde-haired boys walking through camp on a hunting expedition with their butterfly nets. The older one with the blue net was a more serious study. The younger one with an orange net dawdled. Older brother would bark and the little one would run to catch up. He then used the pole end to prod his brother in the back of the knee.

Free entertainment as I readied to go. 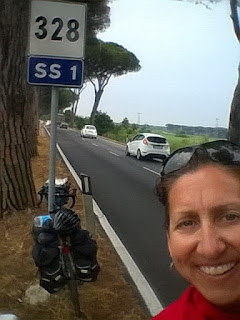 Taking route SS1 to Livorno and then on to Rome.  The route is referred to as Aurelia south. For some reason I say it ‘arugula’ – like the vegetable. Happy someone wrote it down for me, and now I just point to the note.