For the past few months I’ve taken out the 2012 edition of The MILEPOST from the Kewaskum Public Library.  The MILEPOST provides an overview of all major highways and roads in Alaska, like the one from Dalton to Deadhorse.

There’s also much more including campgrounds, like Tolsona Wilderness Campground that has the volcano that ‘looks like the one in Close Encounters of the Third Kind, but bigger and not built by Richard Dreyfuss.’

The MILEPOST also details gas stations, WI-FI availability and RV Parks including the one just outside beautiful downtown Chicken, across from Chicken Gold Camp Outpost and down the highway next to the Goldpanner RV Park.

The longest I’ve been able to check out this book back to back to back is five weeks. It’s as big as a phone book and I carry it around like I own it. I will NOT, however, be taking this on tour – just the weight is a big deterrent; it’s like hauling around a phone book from the 1980s – the kind your grandma would use to boost the 4 year olds up to eye level at the kitchen table.

Today I tried to get some studying in – – before the Badger game. 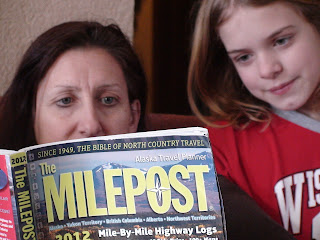 It didn’t take too long and The MILEPOST was the only thing to do on a cold New Year’s Day. 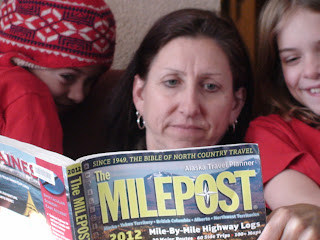 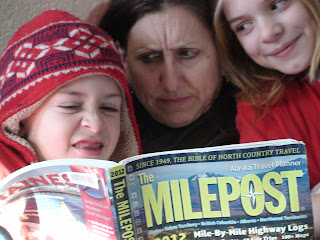 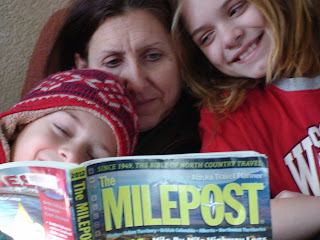