After 75 miles I finally landed at Montalto di Castro. A boy on a scooter used an app on his phone to translate and finally wrote “follow me” as he led me to a campsite on the coast.

It took less than a minute to meet my new neighbors – an energetic group of Italian kids around 6-9 years old. The girls were in the majority. They liked to watch videos of themselves. They also really liked my chips, and Amelia became my self-appointed new best friend and assistant.

Amelia was there when my helmet fell to the ground. She was there when I dropped my lock. She took a break, or so I thought, but came back riding her bike.

Amelia kept an eye on me as I set up my nest for the night. She was eager to be my chip tester, and so were the rest of her siblings.

My personal security. This campsite has everything.  🙂 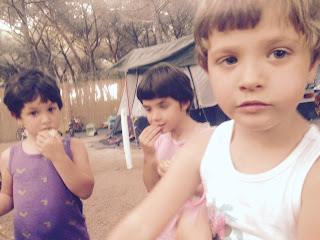 Chip testing draws a crowd. (right) That’s Amelia and two other girls in her clan. You could hear Mom yell “Uno!”  They all grabbed a handful.  I guess in their minds, uno meant “one” handful!