PISA, Italy – Left camp at Montalto di Castro around 7:30 a.m. and was making good time. The wind was at my back and the road, Aurelia SS1, was pretty quiet for a Sunday.

I was pushing along at a good clip, about 23 miles an hour. Today was the day I was going to buckle down and get in some decent mileage.

At about the 12-mile mark, the traffic picked up, the ominous skies opened up, and it was time for a rain delay.

I happily drifted out of the rain and into a small roadside restaurant for some cafe and eggs. Within 30 minutes the rains stopped and I was on the road again; however, struggling a bit as the winds had changed. 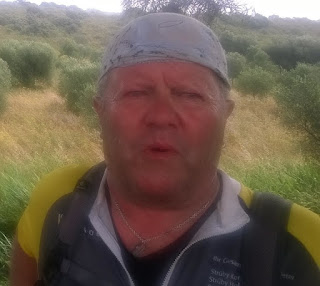 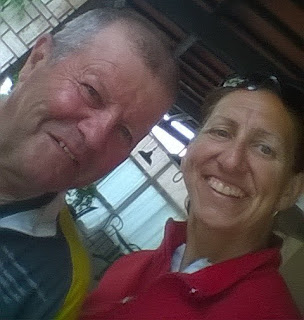 A small man on a bike, he came up from behind me. I was hunched over my handlebars, clunking along, and Sepp was moving effortlessly.

We had a brief “Ciao” moment and Sepp took the lead.

Sepp was from Switzerland and touring, as well. He had all the gear, decked out in clingy spandex and padded shorts. He looked to be in his mid 60s – and he was moving.

I, being the experienced and somewhat weary biker, took full advantage and drafted….close.

We rode for miles. I hung in Sepp’s wake and was selfishly pulled along. I rode so close I could read the small print on his rear fender. It felt rather intimate and naughty since I never jumped out to take my turn at the lead.

Sepp was strong; his hill climbs were effortless. I took a breath, lost a step, and dropped 15 feet back. Sepp noticed and waited. 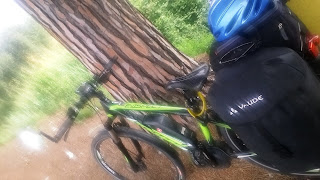 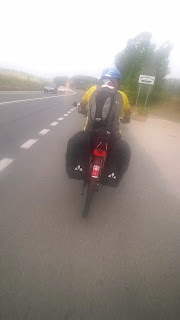 There was a small wayside and we veered off to take some shad, and that’s where I learned more about Sepp.

A retired truck driver, he was on holiday bicycling from Rome back to Switzerland. He showed me a photo on his flip phone of himself posing with two police officers in front of the Basilica in Rome.

Sepp was 73 and stood about 5 feet tallF. he wore a blue and white do-rag under his helmet and he had a small, gold triangle earring in his left ear.

I mentioned how impressed I was with Sepp’s fitness and then I noticed his bike – a Bosch with a 400 Power Pack. I had heard about these biked being popular in Europe, especially with senior citizens. It gives them the ability to tour and ride, but also provides a booster rocket when the going gets tough.

Color me shocked. You know what this meant, right? It meant that all this while I was looking at this guy’s calves and admiring his Olympic bicycling skill, thinking he fell out of the Ron Howard movie “Cocoon” it turns out he’s got a built-in jet engine, and I’M the amazing biker to have kept up with him!

“Coffee time,” said Sepp. “Next stop.”  And he was off….at  stunning pace while I lugged and careened along, dragging my dinosaur tail of gear and trying to catch someone who was 22 years my senior.

During our coffee break I learned that Sepp was an amazing athlete. “I’ve run seven New York marathons, two Boston and one L.A.,” he told me.

“Fitness,” said Sepp. I was feeling less than amazing and more like I should take off the superhero cape that I had given myself for keeping up with his jet bike.