Menu
Menu
Salisbury, New Brunswick-  As I mentioned in an earlier post, July 1 is Canada Day, very similar to our July 4.  As I was making my way north from Amherst to Sackville, New Brunswick, I passed through several festivals which featured the playing of the Canadian National Anthem and officials giving speeches and games for the kids.
In Sackville, downtown Main Street was cordoned off on each end with orange and white barricades and a huge red and white Canadian flag.  There was polka music and lots of seniors sitting on chairs lined up in the street listening.
I didn’t pay much attention until the lone accordion player on stage sat down at her keyboard and started belting out a Burton Cumming’s hit, “My Own way to Rock.”
Shelby Murray was the performer. She looked like a small-town girl, simple pink top and black skirt, short dark hair and she was wailing on that song and jamming on the keyboard like a mix of Jerry Lee Lewis and Little Richard.
Shelby, at 23 years old, is also blind. 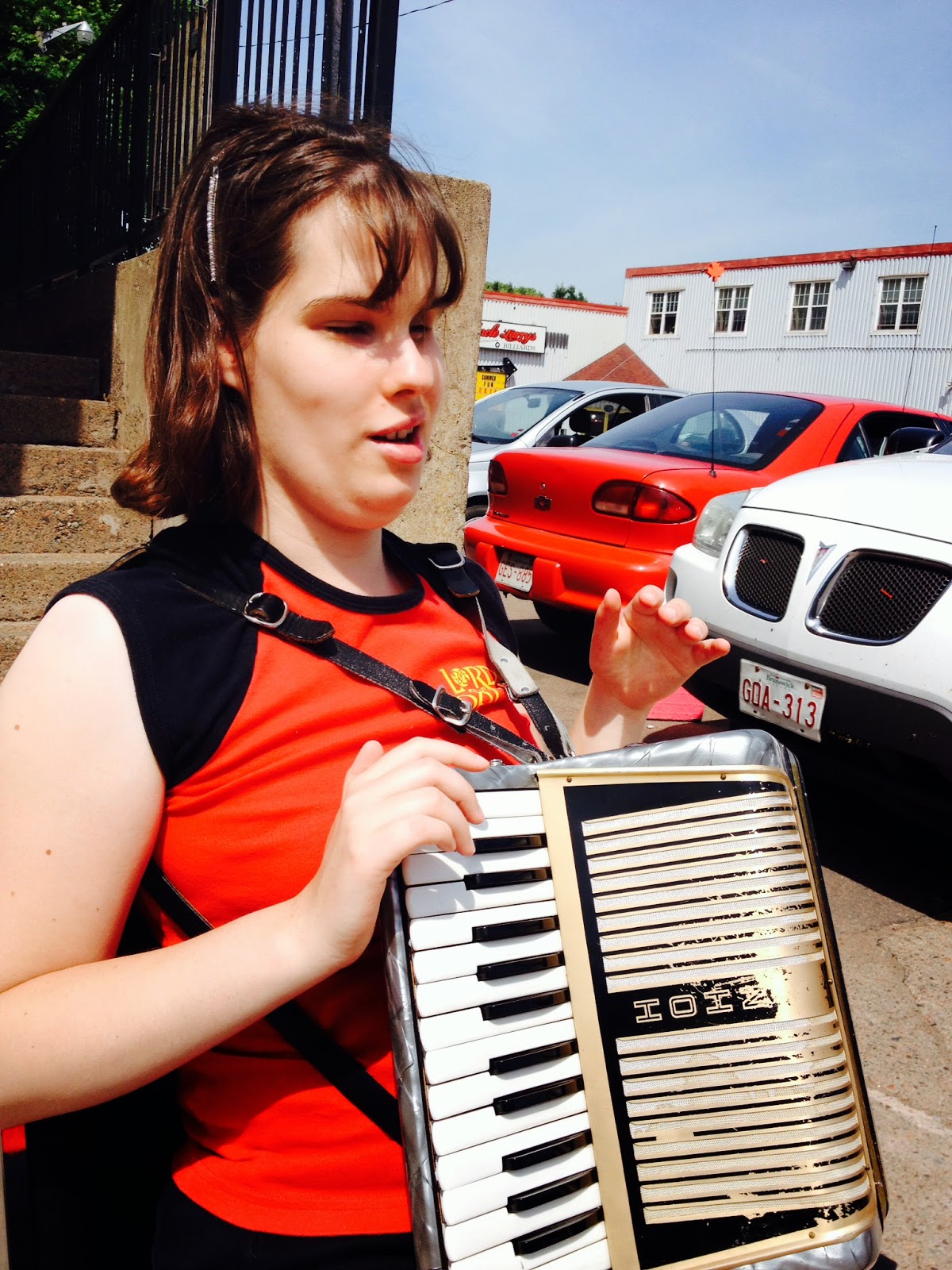 “I was born four months premature, weighed one pound 10 ounces and given a 1% chance of surviving,” she said. “The oxygen the doctors used to save my life somehow detached the retinas from my eyes; the retina is completely gone.”
Shelby confessed she really didn’t know the “medical mechanics of it all,” but she also noted her twin sister died at birth.
Playing keyboard since she was 3, Shelby took up the accordion when she was 15.
“I just always really like the sound,” she said. “I learned scales and then pretty much taught myself.”
The wind is brisk and Shelby good-naturedly curses her short hair. “Just keeps blowing in my face and it’s too short to tie up in a pony.”
A couple pass by in the street and shout hello. “Bye Dick and Bristol – thanks for coming,” she said, acknowledging them by name. “They’re big fans from Amherst.”
A confident musician, Shelby plays exclusively by ear and has progressed through an array of styles. “I used to really be into Bluegrass and I loved rap a lot. I’m not crazy about heavy thrash metal. I play Gospel and rock. I have a friend in Hillsboro who is an AC/DC tribute vocalist and we’ve jammed together a few times; we’re trying to get a band together.”
Musical influences listed on her Fandalism page include Eric Clapton, CCR, BB King, Ronnie Dunn, Sarah McLachlan and Burton Cummings. (She can also be found on YouTube.) Sitting on a black straight-back chair in the hot sun, Shelby has her Hohner piano accordion nestled in her lap.  “I got this one second hand. I actually have three good working ones, including a Cajun accordion and one given to me by Ken Campbell. His dad died in 1991 – the year I was born. I was at a jamboree with some friends when he dropped it off at my house.”
Shelby excuses herself for a moment as a 70-year-old man asks to shake her hand.
“My name is Bob Wallace,” he said, reaching out. “My, you have small hands.”
Wallace passes his white cane to his wife as Shelby takes his hand to let him
test her piano accordion. “I’ve got five accordions, but I can’t play like you!”
Another man stops and eagerly asks, “When are you going to put out a CD?”
Shelby, who has an ‘awe-shucks’ demeanor, said she can’t afford to make one and
“time is an issue.”
After meeting with fans, Shelby said she’s been interviewed quite a bit by
Canadian media, including Global News, CTV, CVC Radio and CFTA in Amherst.  She also has videos posted online, including one of her playing the Orange Blossom Special. She nimbly races over the keyboards the way Eddie Van Halen shreds a guitar.
“I don’t know if you lose one of your senses – another takes over,” said Shelby. “My mom loves music, my 20-year-old brother’s a metal head and he’s in a band. I’ve just always loved music and I’ve just been blessed to have folks that reach out to me, including those at Salisbury Baptist Church, and Dick and Carol from Amherst.”
Although visually impaired, Shelby said she could tell people were having a good time. When told about the bubbles that flew through the air during her polka on the accordion, she laughed at the impromptu Lawrence Welk atmosphere.
Prompted to follow her performance dates on her Facebook page, Shelby said she posts her schedule and regularly updates. The entries read, “I’m going to be there to make some noise.”