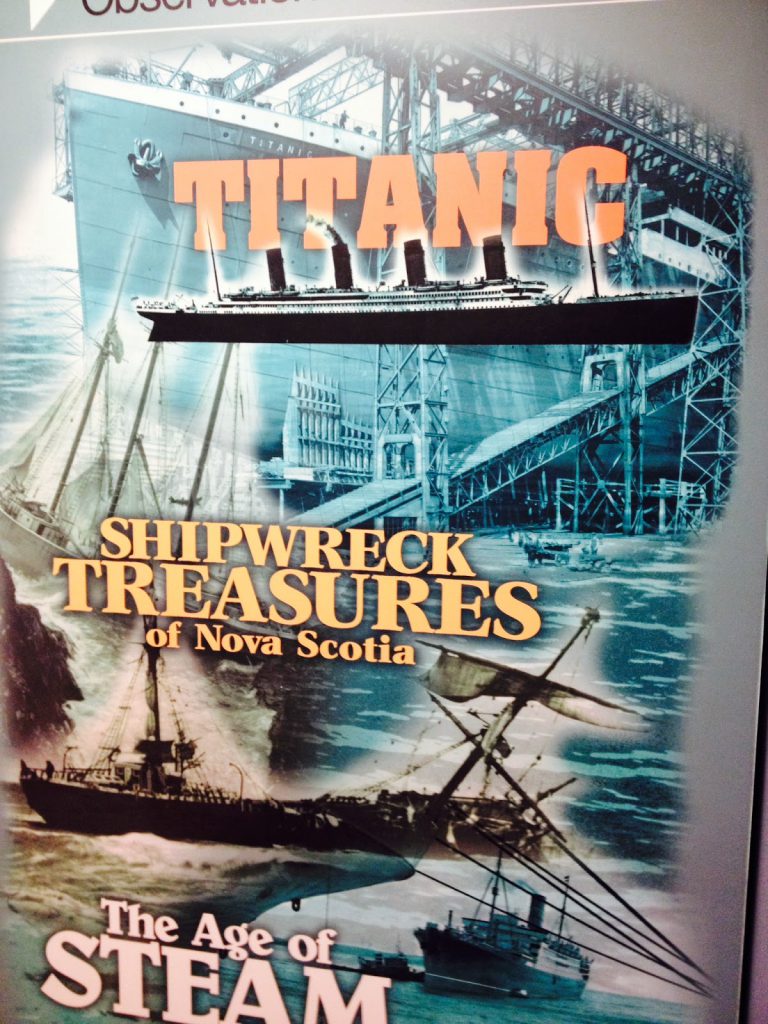 In 2014 I flew to Nova Scotia to pedal home on my annual bicycle tour. On my first day in Halifax I visited the Maritime Museum. There was lots of great history and artifacts about the Titanic and the museum documented the key role Halifax played in the disaster. Although the maritime city was about 700 miles from where the Titanic went down, it was the closest land port and the primary site for the recovery effort.

The Maritime Museum in downtown Halifax has a detailed display on the recovery of victims of the Titanic.  Many were brought to the small lakeside community of Halifax.

To set the stage for the gritty story of the recovery there are displays of items from the ship and small details about the vessel itself such as the steel plates used in construction of the Titanic were fastened by 3 million rivets. The steel however contained high levels of sulfur which made it brittle at cold temperatures.

Many pieces at the museum were recovered by Capt. W.G. Squares de Carteret of the cable ship Minia. Wreckage included a piece of cabinetry, a deck chair and sections of carved wood from the landing of Titanic’s staircase. The dark wood features an egg-and-dart pattern from the second- class smoking room.

The cabinetry is the only piece known to have survived the Titanic. Floating wreckage was found by the ships that recovered bodies of the victims.

Piles of coffins were brought to the wharf in Halifax. There were strict class barriers; first class passengers were moved in coffins. Second and third in canvas bags and members of the crew were taken off in open stretchers. Hearses and wagons took bodies to a temporary morgue at the Mayflower curling rink.

Forty undertakers were on hand. Halifax buried 140 victims, including the nameless. Three churches handled the funerals.

Francis Dyle was quoted on May 3, 1912, saying, “I honestly hope I shall never have to come to another expedition like this. The doctor and I are sleeping in the middle of 14 coffins.”

Josyann Abisaab, whose great grandfather died on the Titanic, shared more insight in an article, “The Halifax-Titanic Connection.” A portion of that story is below.

Cable ships were mobilized after the Titanic tragedy because they were well equipped with wireless telegraph and large storage areas to hold the victims. Sadly, the brave men on the cable ships that set sail from Halifax with a cargo of ice, coffins, embalming fluid and canvas bags, would soon learn that the grim task of recovering Titanic victims would not be easy.

The four ships sent from Halifax to pluck the victims out of the frigid waters recovered a total of 328 bodies, of which 119 were buried at sea. The bodies of 59 of the victims were reclaimed by their families. The remaining 150 were buried in three cemeteries in the city.

the Titanic victims were somberly unloaded at the Flagship Wharf on the Halifax waterfront, church bells tolled and horse-drawn hearses owned by Snow Co. carried the coffins to the morgue. The city, with much of its center draped in black bunting, went into mourning.

Click HERE for more details on the Maritime Museum in Halifax.

Sidebar story: While digging through my travel journal for the Halifax-Titanic story I came across another gem from that same bike tour.

Since I arrived in Halifax 12 hours late I was already behind my self-imposed schedule.

Air Canada managed to help hail a shuttle to the Maritime Museum in downtown Halifax about 60 miles away.

My driver was Bill Sullivan, a happy-go-lucky guy with three-days growth of gray stubble, a Bluetooth in his ear and a plastic-looking wood cross around his neck. 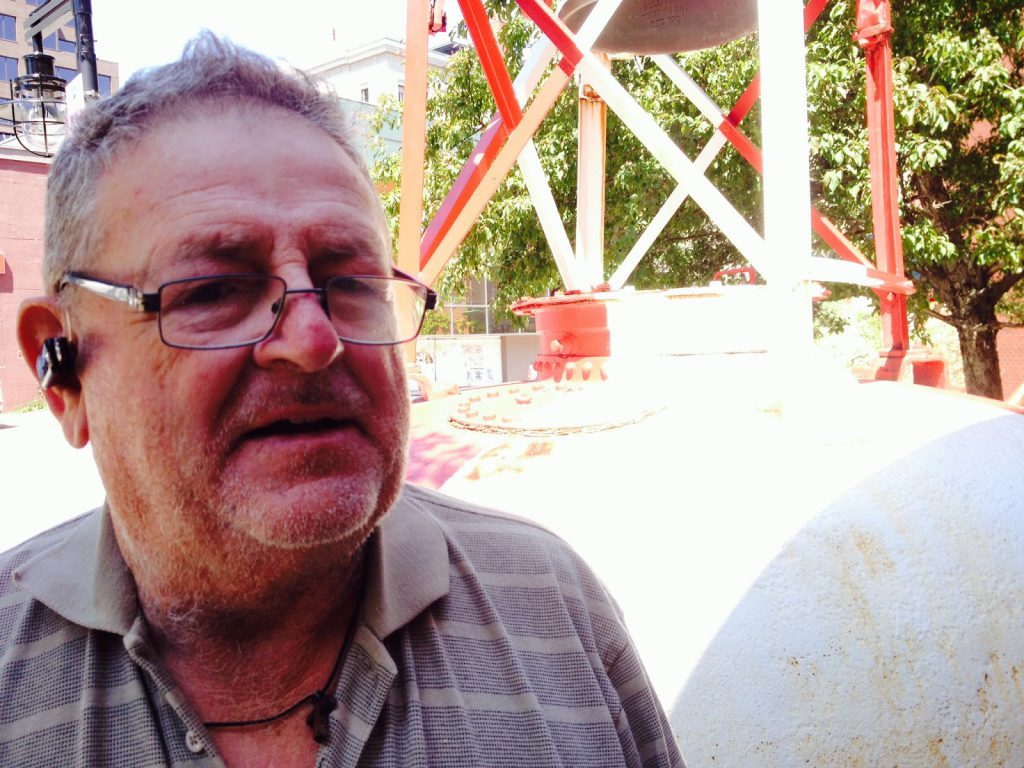 “I left school when I was 11 to get a job,” Sullivan said with a blended Nova Scotia/ Boston accent.

Sullivan delivered telegrams on a bicycle.

“We had a uniform and everything,” he said describing his cap, boots and tunic. “I delivered a birthday message to an old woman. She stood in the doorway and said, ‘Aren’t you supposed to sing?’ Then I had to deliver a telegram with a black border. I got to the lady’s home and she knew right away.”

Sullivan said he did — for a while. The woman left the telegram lying on the table unopened.

“Craziest thing I’d ever seen, her eyes welled up but she never cried one tear,” he said confirming the woman’s son had been killed in the war.

Sullivan, 73, was great at conversation. He kept it going. No sense in silence when it could be filled with a story.

“You familiar with the Butterbox Babies,” he asked? “There was a dairy that sold butter in boxes and those boxes were the perfect size for a coffin of an infant born at the Ideal Maternity Home.”

The outfit was in an eastern province of Nova Scotia in the 1930s and ’40s.

“That couple, the Youngs, would take in unwed mothers, charge them $500 a week and either tell them their baby had died and then sell it or they eventually did die because all they fed the babies was molasses and water,” he said. “I was one of those babies, but I was adopted.”

Sullivan said he bounced around to a number of foster homes including a family in New Jersey.

When that story about the Butterbox Babies came out, the kids that survived started finding each other,” he said. “We had a reunion recently and 120 of us showed up.”

Sullivan confidently drove through traffic. He wore rectangular glasses and had a collection of sunglasses hanging from the visors in the van.

“You into cowboy movies?” asked Sullivan, not waiting for an answer. “What was Tom Mix horse’s name?”

Old Westerns. That was another one of his passions. “Tony. Tony the Wonder Horse,” he said with assurance.

“You know any cowboys?”

I fumbled a weak guess of Ronald Reagan. Apparently he wasn’t big enough to have his own horse with a name.

“Gene Autry; now there’s a cowboy. What song was his most famous?” grilled Sullivan. “You sing it once a year … .”

I was about to blurt out “Happy Birthday” but Bill couldn’t wait for my incorrect answer so he started singing, “Rudolph the red-nosed reindeer … .”

He was so proud of himself but he wasn’t smug.

“Gene Autry’s horse was Champion. How about Roy Rogers — what was his horse’s name?”

The cowpoke trivia continued. “Trigger,” he said quickly. I knew that one but just blanked and Bill wasn’t big on a three-second pause or allowing me time to phone a friend.

Arriving at the Maritime Museum I knew I definitely needed to work on my equine movie history.

Sullivan was a gracious driver. He helped unload my bike and was eager to pose for a photo before hitting the dusty wagon trail again.