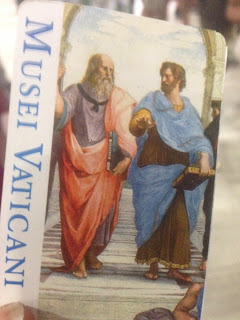 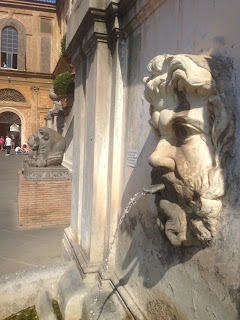 Used my smarts and stepped outside my comfort zone. I went with “Plan B” for my visit to the Vatican. All the locals said my bike would be at risk if I were to park it and lock it while touring Rome, so I jumped on a tour bus that dropped me a block from my destination. 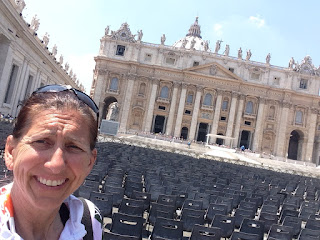 There’s an outfit called “Vatican No Line” tours. I went for it because it came with a docent, and how can you beat not having to wait in line? Being a “religious” tour, who would believe they’d lie, right? Well, they did. We had to wait in line with everybody else.  Once inside, I found I could have even rented my own little radio tour. Consider this a free tip for all those planning to knock Italy off your bucket list. 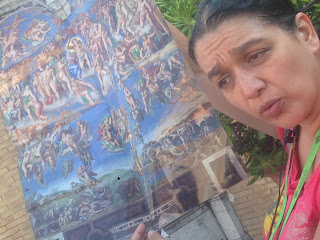 On the plus side, the guide, Alexandra, was wizard smart and funny. “Now, if you lose the headset it’s a $1000 fine from the Vatican,” she said. “Just kidding, it’s not, but don’t walk away with it because we will find you.”

The tour was an extensive two hours of history, art and more history. The sculptures were detailed, gorgeous and, to my surprise, they were fake – like the trophy antlers at Cabela’s. 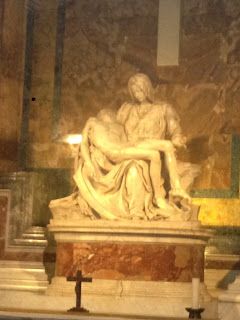 “It’s not like these sculptures were found by Indiana  Jones,” Alexandra said, “The originals were done in bronze and a lot of these are copies, many sculpted by Greek prisoners.”

Alexandra’s stories and attention to detail were amazing, like the time the pope climbed up the scaffolding to get a better look at Michelangelo’s work and then he did nothing but rag on him. Others who were critical? Michelangelo got even by putting their likeness  on paintings of scoundrels. 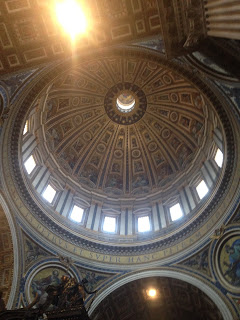 The fabulous sculptures showed full motion and an artist’s eye for detailing every muscle. The paintings and mosaics were graphic and Alexandra showed off her extensive art education. “The colors are the feast of the redemption of man – and this painting with the light and the moon, the bigger lump is the light,” she said. 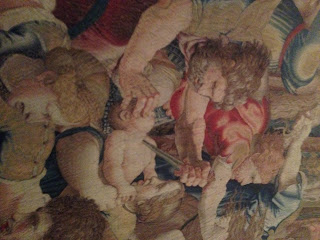 We followed like ducks, with our fluorescent green transistors and our ear plugs, snapping photos while we’re walking, and snapping more photos. Every other docent led with a rag or flag tied to stick. Alexandra held a water bottle over her head.

Our exclusive tour ended, we turned in our radios, and then it was on to the Basilica. 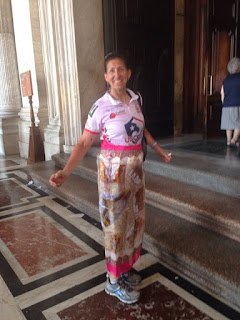 “No shorts,” said the guard, which was kind of  ‘judgy’ because others had shorts. “No knees,” he  said.  Alexandra warned me this could happen, so I managed to pinch a garbage bag and I returned with that in a trendy Hefty-style wrap around. “No plastic,” said the guard, biting off the end of each word. It kinda sounded like he just made that up. I asked him for help and he sent me to the gift shop run by the nuns where I picked up this cute little number 3 Euro.  Plus, the ‘sistahs’ had the best price on the postcards, so I loaded up.

One of the nuns had to tie the scarf around me and cinch it with a scout knot. I fluffed the scarf  bit as I walked past the guard – he didn’t even make eye contact, but I knew that he knew I was there.

The whole Basilica looked crazy familiar, just like I’ve seen on TV. I went to Mass, had my cross blessed and talked to Rev. Kevin near the confessional. He was from Ireland and had a very O’Irish way about him, 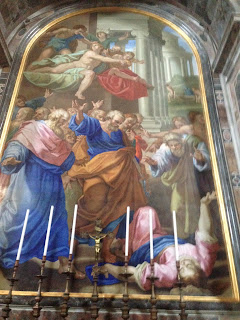 “You had to be selected for this job,” he said, “I didn’t even know my hat was in the ring.

At Mass, the priests wore fiery bright red robes. There was a mix of Latin and Italian, and I understood very little. The priests basically said the entire Mass while facing the altar.