Menu
Menu
Headed out at 4:30 a.m. Thursday morning to beat the heat and make it 64 miles from Albuquerque to Santa Fe via the Turquoise Trail. 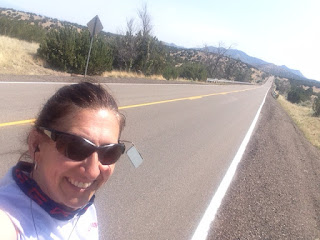 Much of what the Turquoise Trail road looks like.

Sometimes I don’t see any traffic for 20 minutes. 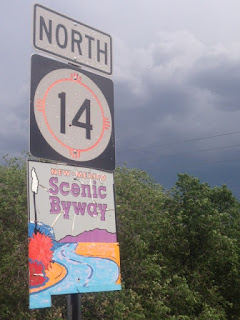 Aside from the location marker, this photo shows the dark skies and the approaching storm. 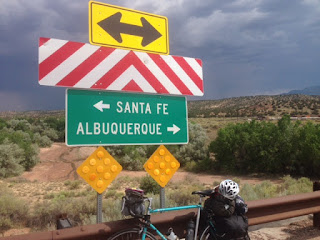 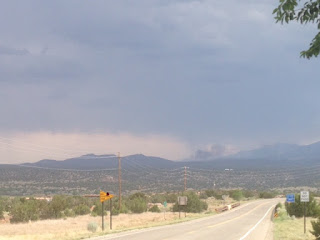 It turned out to be a plan with the best of intentions.

This was my first solid day of biking following my clunky fall. I can pedal fine but there’s some soreness that makes me walk with a bit of a hitch in my giddy-up.

The Turquoise Trail is a more scenic route from Albuquerque to Santa Fe. It passes through small, eccentric and artsy towns and comes highly recommended by the fellas at the bike shops.

While I am not pedaling over the Sandia Mountains or the San Pedro Mountains I am in between and that still means some significant hills.

By the time I reach 21 measly miles I’m tanking. I’m in the very, very small town of Golden. Al is the friendly face behind the counter at Henderson Store. Its been family owned and operated since 1918 and has a high-quality collection of Native American arts and crafts.

What really trips my trigger is he has a porch with shade. I find a quiet corner, under a swallows nest tucked into the corner of a wood beam, and I totally fall asleep. I’m out of the intense sun and no newts or lizards are running across my face so I think I’ll be okay.

I’m sure it was a combination of things – the early start to the day, the heat and the hills and the altitude…. something which I completely forgot to factor in when planning the tour.

Following my brief siesta I come across the home of ‘the mayor’ of Golden. #sarcasm. He’s the local eccentric that has a glass bottle display in his front yard with a confusing series of signage. ‘Welcome,’ ‘No trespassing’ and ‘Free information about Golden.’ 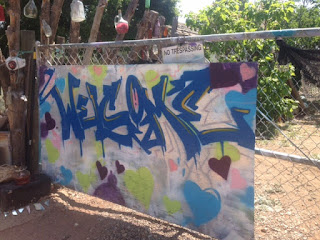 The colorful glass bottles are beautiful. The rest of the front yard is very Sanford & Son. 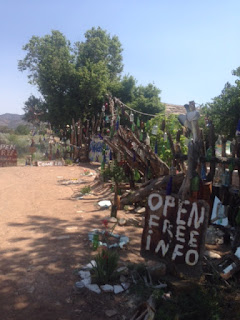 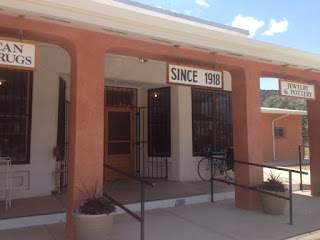 Eleven more miles and I’m into Madrid; an old coal mining town established in the 1890’s that was left abandoned in the 1950s and later revived by hippies in the 1970s and turned into a hot spot for movies and artists.

Some interesting tidbits about Madrid:

– In 1913 there was the first mine accident and in order to boost moral the owner of the mine built the “first lighted baseball field and score board west of the Mississippi. Because Route 66 ran through Madrid the Red Sox and White Sox stopped to play against the Madrid Miners.

– A tradition started In the 1930s to illuminate the town for the Christmas season. Free electricity was offered for the villagers if they would put up Christmas lights. The people embrace the tradition and it kicked off a lighted Parade, which in its heyday there were 150 floats and the parade stretched a half-mile. Major airlines rerouted their flights to include the Christmas town of New Mexico. On one of those flights Walt Disney heard the story and later came to see the site. He returned to California and the ideas for Disneyland’s Toyland light parade and street lights was born.

– A couple other Hollywood names also came to Madrid. In 1976 David Bowie’s “The Man Who Fell to Earth” man was filmed on the coal tailing piles south of town and in 1979 Perry Como hosted a TV Christmas special in Madrid.

Photo gallery of some of the art in Madrid: 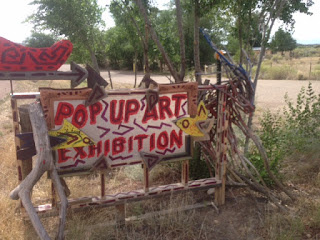 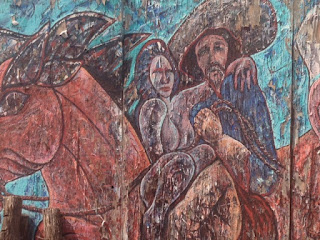 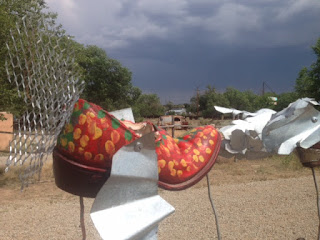 Dan and his dog from Art & Antiques. Dan likes to weld horse shoes into art. His wife, Lori Musil paints the Western and equine art. 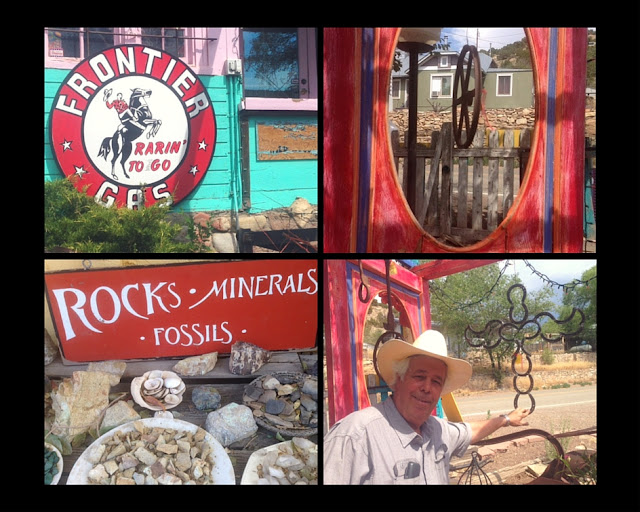