July 5, 2019 – Philadelphia, PA – A whirlwind of a July 4th in Philadelphia that was loaded with red, white and blue history and an Amazing-Race effort to complete as many of the Philly attractions in six hours as possible. 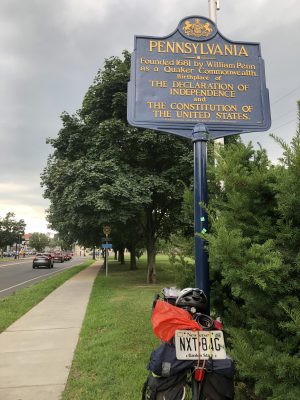 First order of business: bike 25 miles from Bristol, PA  to Philly. The key was to start at first light, about 6 a.m.; that way you avoid the heat, and all the pimps, drug dealers, Bloods and Crips who were still asleep and off the street.

There was a miscalculation, however, as the pimps and drug dealers apparently are early risers on July 4.

The Liberty Bell, also known as the “Statehouse Bell.” This is a free indoor exhibit by the National Parks Service. The bell bears the inscription “Proclaim Liberty Throughout All the Land Unto All the Inhabitants thereof,” which is a verse from the Bible (King James Version). 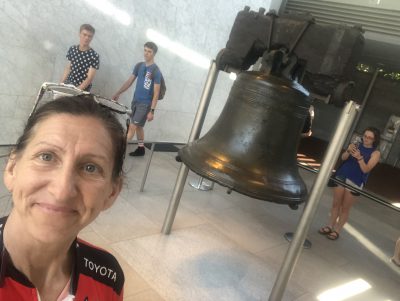 An interesting history nugget about the bell is when it went on tour in 1915 people lined up to kiss the bell and have their babies photographed with it. Posted near the bell “The Liberty Bell’s famous gap-often called a “crack” and running from tip to crown-makes it instantly recognizable.

That gap is really the result of an attempt to fix a thin crack that destroyed the Bell’s tone at some moment after the American Revolution. Exactly when that crack developed is lost to history.

The repair work dates to 1846. It failed when as the bell rang for George Washington’s birthday anniversary, the original crack reappeared and lengthened. It zig-zagged up toward the top of the bell, silencing it-at least physically-forever.” 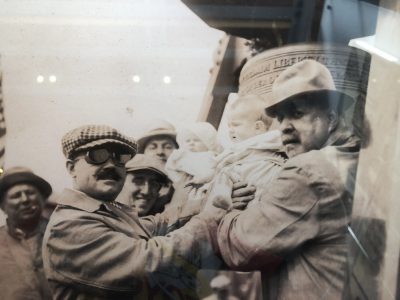 Philadelphia’s Museum of Art: Famous for its front steps. The visit to the museum steps is dedicated to wonderful WashingtonCountyInsider.com supporters and the Museum of Wisconsin Art. 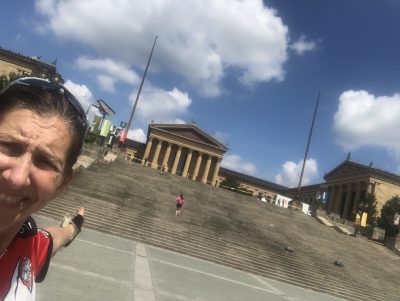 Do you remember the year Rocky won an Oscar for best film? 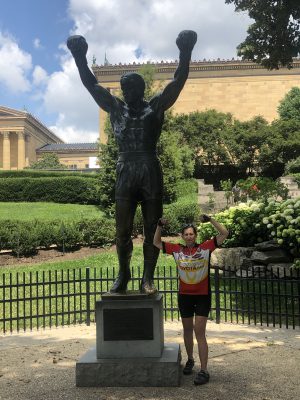 About three blocks away from the Museum is the Cathedral Basilica of Sts. Peter and Paul.  The basilica was built between 1846-1864.

An unexpected treat was the choir that was rehearsing as I toured the interior and visited the stations of the cross.

The cathedral is the largest Catholic church in Pennsylvania. 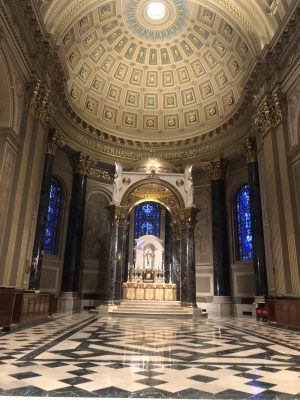 It has been the site of two papal Masses, one celebrated by Pope John Paul II in 1979, and the other by Pope Francis in 2015. 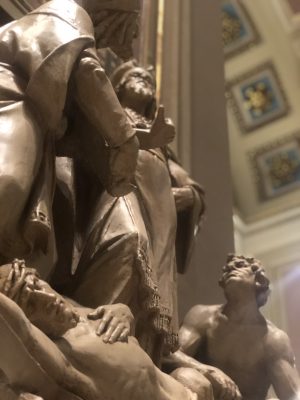 Across from the Cathedral is the town square and the required visit to the “I Love Philly” photo.

Funny, the 20-something kid in front of me had to ask directions on how to make a heart symbol with his hands. Someone in the crowd yelled, “Two c’s.” Sadly he was still confused. 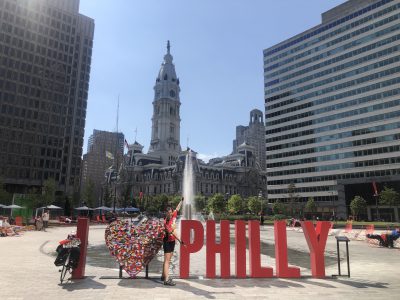 Jim’s South Street Philly Cheesesteak: A staple of Philly cuisine. Had to try it, although the locals don’t know what the fuss is about.

Jim’s on Fifth Avenue and South; it was packed. I paid a kid $5 to watch my bike. The foot-long sandwich was $8. Loaded with green peppers and onions, I’d have to agree with the locals. The cheese was a spatula slide of cheese whiz from a tub and the meat was chopped to mush. Architecture in Downtown Philly: Was briefly adopted by a cyclist in Philly who took me on a spontaneous bike tour of the architecture in the downtown area. “It makes you look up when you bike,” said Curtis. 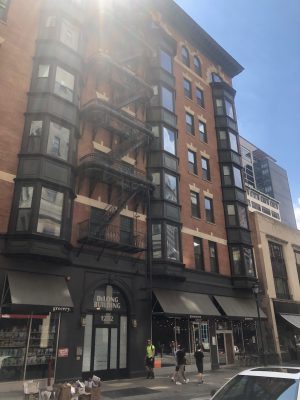 It was fascinating to view the detail and how ornate the construction was. The artwork of a simple fire escape was most impressive. 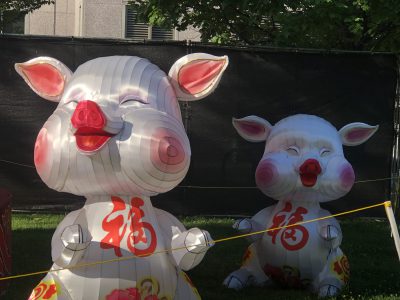 Schuylkill River Trail: Wrapped up my visit to Philly by taking advantage of the Schuylkill River Trail. I had my doubts about Siri and her Google biking suggestions after my dicey morning commute, however, the locals said I was through the worst and this trail would get me 32 miles to Valley Forge. It did not disappoint.

The trail was paved in the city and wound it’s way along the Schuykill River. Further out it morphed into a hard-packed gravel and even a wooden plank path. Always safe and well marked. Ended the 4th with 62 miles on the day. Today it’s off to Gettysburg.