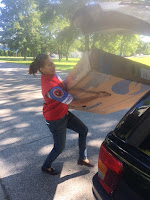 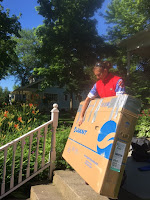 June 25, 2017 – West Bend, WI – Just sharing some of what it’s like traveling with a bike in a box.
Cumbersome is one word that nails it.
My bike flies with me on these tours. I take off the front wheel, handlebars and pedals, pack it up and heft it through the airport … along with my luggage.
From what I’ve witnessed it’s easier than a kid in a stroller. Few people offer to help which means I must look capable; “sturdy” is how one gentleman described my appearance. According to the Urban Dictionary a sturdy girl is “equally capable of climbing rocks.”
I’ve got my system down to a science.

The other thing that happens behind the scenes is the bike is a conversation starter.
So far the three people I’ve met in line have all had a family member who has had Alzheimer’s. “My friend nursed his wife until her death,” said Bill. “Now he’s 90 years old and taking care of his son who has Alzheimer’s.”
Bill wished me luck on tour and so did the woman at the ticket desk at Delta. She even waived the fee to fly my bike. “My grandma has Alzheimer’s. I really appreciate what you’re doing,” she said.
On a side note: This year the bike and contents tipped the scale at 52 pounds. My luggage for three weeks weighed in at 15 pounds. 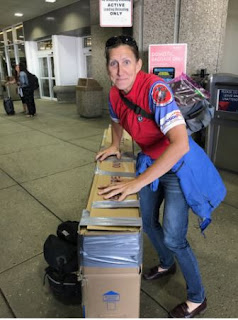