Menu
Menu
Received an interesting comment the other day regarding my bike tour. It read, “Tears already. I love these adventures. I get everything from ‘I wish I was there’ to ‘Thank God I’m not.’
To give you an example – every day is a different adventure.
On Monday I left Santa Rosa at 7 a.m. with the best of intentions to make it 70 miles east to Tucumcari.
Stopped at the restaurant, Sun & Sand, because it looked like a classic on Route 66 and it had a ton of cars out front.

I found a table of good ole boys and they adopted me right away offering hand-drawn table-napkin maps, shared bits of their personal lives and bought me into the mix with a little good-natured razzing. 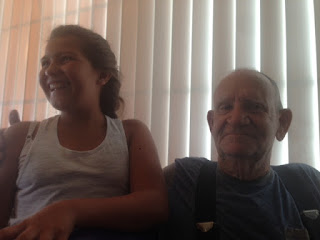 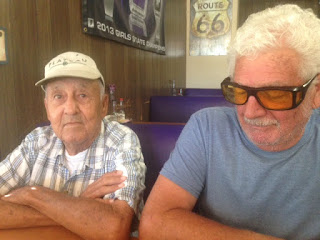 I finally hit the road around 8:15 a.m. with my napkin map in full view. I found the Route 66 frontage road.
Just past Luv’s gas station where I made a final stop to check my tires. On my way out I passed a nervous guy in dark sunglasses squatting behind a cardboard sign that read ‘Hungry and Stranded.’
I had also just passed a posted sign that read, ‘Don’t pick up hitchhikers, prison in town.’
So I rolled down the frontage road about 2 miles and I had second thoughts that this wasn’t going to be the best route. So I turned around, went back past the sketchy hiker and to the interstate.
Then I hit another posted sign, ‘No bicycles or pedestrians allowed.’
Serious. I rode on that same highway all the way from Las Vegas into Santa Rosa the night before.
So I flipped around and pedaled past the sketchy guy and back up the frontage road again.
Made it 14 miles before my first flat. Good grief!  I had already lived this episode. There was no shade so I started changing out the tire when a guy drive up in a white van.
Jesse worked for the state. He confessed he thought it was a dead cow in the road. No, just me.
We struggled together to fix the tire and pretty much just got in each other’s way.
Another pickup pulled alongside and Cleve said he could drag me into town to get me fixed up.
It was a tough decision but I blew off a rescue ride the other day and thought this may be best.
So back 14 miles, past the sketchy guy again.  Cleve had to go to town for medicine for his horses;two had run through a barbed wire fence and got some severe gashes.
He spoke with some urgency, and between comments he’d spit tobacco juice into a tin cup that he held between his legs.
Cleve dropped me at an auto repair shop. He knew the fellas there by name. They dunked my inner tube, found the holes and we got it all fixed.
“Take I-40,” the guys at the shop said. “Those posted signs are merely a suggestion.”
Serious.
So for the next 70 miles, starting at 10:30 a.m. I was one with the road and the semis.