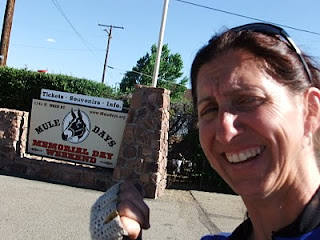 SANTA CLARITA – Bicycled out of Simi Valley around 5 a.m., climbed the six-mile hill out of town and approached the rest of the day with a bit of nervous apprehension.

I had a rough map, lots of hand-written directions and two bike shop owners saying I’d have a tough time making it north to Bakersfield.

So,,,, with some superior planning and coordination, I had everything screwed up.

Other than the Interstate, there weren’t many options as far as county roads or side streets … and I had to get through some mountains.

By 8 a.m. on the outskirts of Santa Clarita, I explored my options at a gas station near Highway 5, trying to catch a ride. It would have helped to know Spanish.

A bit frustrated, I went into town to talk to some food. The Way Station on San Fernando Road in Newhall was the perfect spot with the ambiance of an old-time truck stop. License plates covering the walls were donated by customers. There were also posters of Ringling Brothers & Barnum Bailey Circus and a couple black and white pictures of Roy Rogers eating Wheaties. The menu featured the Brakeman’s Breakfast of two eggs, two biscuits, and lots of gravy for $6.25. The Pony Express was hot oatmeal and banana with a bagel and juice for $6.30.

Of course – movies were shot at the Way Station including The Buddy Holly Story and a lot of Dennis Weaver’s McCloud series.

After ordering, I struck up a conversation with the couple at the booth next door; Scott and Bev became my new best friends. He was a retired high school music teacher, originally from Minnesota. Bev was a second grade teacher from California. They rescued me – had me over for dinner, let me spend the night and gave me a nice push 210 miles north to Bishop. “We’re going camping and geocaching there anyway,” said Scott.

The pair met while in college at UCLA and were dedicated Bruins fans; easily distinguishable by the Bruins silver ice bucket on the kitchen counter, tiny stuffed Bruins bears climbing the stair railing, five boxes of Bruins cereal on top of the refrigerator, UCLA nightlight in the bathroom…. you get the picture.

Dinner was a family affair with Bev’s nephew Eric, his friend Wazzie, Scott’s friend and fellow UCLA alum Mike, and Bev’s soon-to-be-93-year-old mother. Chicken, rice, green salad, and fresh fruit. Discussion ran the gamut from UCLA to Disney to the bike tour and trends in education.

Mike was a former music teacher as well; both he and Scott were UCLA band members.

We took off early the next morning around 8:30 a.m. and drove 210 miles north to Bishop.

Bev and Scott dropped me off in a shady spot so I could put my bike together.

The Salvation Army helped me find a place to stay at the Trees Motel on West Line St. ,Bob, at the front desk was all business. He wore a sleeveless shirt, shorts, and had a white flat-top. “Here’s your key,” he said, handing me a metal key attached to a green plastic diamond fob -room 104.

I walked down two steps from the office, which was about the size of a kitchen appliance, shuffled over a couple steps and I was to my room.

The phone was ringing as I entered – it was Bob, at the front desk. “This is Bob in the office, see me,” he said. All I could think was my credit card didn’t go through.

I shuffled over and up two steps. Bob’s Chihuahua was standing in the doorway to the living quarters in the back of the office.

Bob talked for 15 minutes or so about his memories of Wisconsin; he left years ago. “Hated the cold,” he said, as a drop of sweat crept down the side of his nose and hung on his upper lip. “Now I really miss the change in seasons.”

Bob served in the army, traveled the world.

He waived his arms while he talked and I noticed a thick turquoise green tattoo on his left forearm. It looked like it was once a full-figured blonde bombshell wearing a bathing suit and looking flirtatiously over her shoulder. Sun and aging made her sag a bit – both she and Bob moving together into their Sabbath.

– Ticked off 25 miles Saturday from Simi Valley to Santa Clarita. Tooled around town after being adopted by Scott and Bev and notched 42 miles by the end of the day.

– It’s interesting to note how I’m perceived by the public is different depending on the size of the city. The smaller the community, the more I’m seen as a cross-country bicyclist. The larger the city – I’m seen as homeless.

– Toured the Galen Rowell Gallery in Bishop. At 32, he photographed his first cover story for National Geographic. He specialized in wilderness photography, landscape and mountain climbing. “Photography is an action sport,” said Rowell, who took pictures in the Himalayas, Yosemite, and Africa… just to name a few. Rowell and his wife were killed in a plane crash in 2002 when they were coming into Bishop Airport in a small plane following an expedition in Alaska.

– Bishop was also known for Mule Days. “Celebrated every year around Memorial Day,” said Kim, who helped organize the event. “It started in 1941 when it was too cold for the Packers.” I jumped all over her… “It’s never too cold for the Packers!” We were locked in a stare-down – mine fueled by green and gold and Kim totally bewildered. “Packing mules,” she said dryly – like I was the dope.