July 11, 2017 – Netherlands – Thought I’d share another flashback from one of my previous Amazing Ride for Alzheimers trips. – Judy

_______________________________________________________________
De Funiak Springs, FL –  De Funiak Springs is about 75 miles east of Pensacola, Florida.
Running right along Highway 9,0 the small town of about 25,000 turns is a gem with homey storefronts and fantastic historic buildings.
The Hall of Brotherhood is a large white-domed building that sits on the west side of Lake De Funiak and across from the pinnacle-steepled First United Methodist Church on Circle Dr. and West Ave.  The building was finished in 1910 for $28,000 and features a 4,000 seat auditorium.
The hall was once home to the Chatauqua Institution, founded in 1847 in western New York State as a vacation school for Sunday School teachers. The idea was to provide a retreat and improve religious and secular education for the general public.
The effort spread rapidly across the nation and in 1885 opened in De Funiak Springs. By the 20th century the national movement declined and the Florida chapter closed in 1920.
The Hall of Brotherhood was listed in the National Register of Historic Places in 1972.
In 1975 a hurricane destroyed the auditorium wing and severely damaged the rest of the structure. Since then, there’s been an ongoing program to fully restore the building.
Scattered throughout De Funiak Springs are small shops with character.
The Little Big Store is a general merchantile located on a quiet side street. A sign in the window reads ‘homemade lye soap’ and there are tin toys that line the windowsill.
There’s the Busy Bee Cafe and the Little Big Store; a general merchantile located on a quiet side street. A sign in the window reads ‘homemade lye soap’ and there are tin toys that line the windowsill.
There are a handful of antique shops including Nook and Granny, and Sanford & Sisters Mall and Tea Room which sits along Hwy 90.
Sanford & Sisters looks like it would be in the National Register, or at least half the items sitting out front of the store do, as the front of the building is piled with an eclectic mix of items; sort of a cross between a rummage sale and garbage day.
There’re brightly painted old farm tools, racks of wooden fishing poles, and a pair of rusty bikes.
Other items include wicker chairs that have seen better days, a stack of tiki torches, and a pyramid of old gas cans framed by the mantle of a fireplace.
Up the street is the Corner Cafe. The hometown diner is a simple square building.. Inside tables are covered with red and white checkered plastic tablecloths.
I sit down at a table with four old men; they are busy solving the hot topics of the day, including the value of AAA, whether it’s better to pay with cash or credit, and where the police were headed with their siren last night.
“If you’re going to sit here, you better hang on and buckle up,” said Tyrone. He was the self-proclaimed director of the group.
Tyrone had to be in his early 70s. He wore a blue gray mechanics shirt with his name printed on a white patch sewn on the right-hand pocket. His shirt was unbuttoned way too low and a big tuft of curly old man hair filled the gap.
Everybody at the table had a pocket protector stuffed with pens and a case for their sunglasses. I felt a bit out of uniform.
“I can build you an airplane, I can build you a train but I can’t figure out my wife’s rose bushes,” said Tyrone in a very loud voice.
Matter of fact, everybody at the table talked loud. The kicker came when Tyrone fielded a phone call. It was like when we were kids using a walkie talkie. He held the phone in front of his face and yelled into it and then looked at it when the person on the other end yelled back.
It was like we were on the party line with the operator. Worse yet, the woman on the other end apparently misdialed – yet she and Tyrone carried on for five, long, painful minutes anyway.
There were no secrets at this table, much less at the Corner Cafe.
“Your legs hurt after a day of biking?” asked Tyrone after he turned off his phone and shoved it in his front pocket.
I started to tell him ‘not much’ but Tyrone was already onto his own leg pain and how he came home one day and his wife had “found a water bed.”
“I says, I’m not sleeping in that lake.”
Tyrone then went into graphic detail about his nightly leg pain, the shaking, and how he’d be pulling in his wife’s hair because his leg tremors were so out of control.
Yes, there was an actual reenactment at the table. Tyrone got so into it we all had to grab out ice water and coffee cups for fear he’d kick them over.
As I wrapped up breakfast and walked to my bike to leave, Tyrone followed me out the door.
“See all these political signs,” said Tyrone – who was never at a loss for conversation. “That’s for school board. I told one candidate she should take the TV show test and if she was smarter than a fifth grader – then I’d vote for her.”
Tyrone was still talking as I rode away; although I’m being kind – my fifth-grade teacher would call it yammering. I really hate to leave De Funiak Springs. 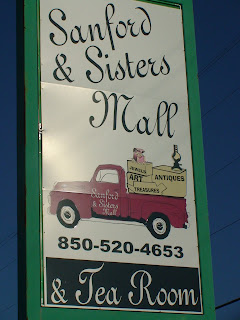 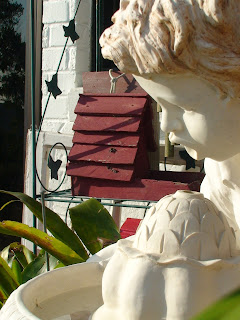 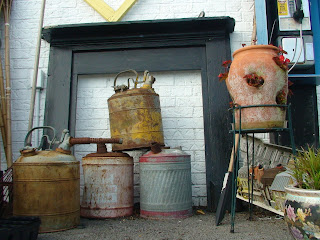 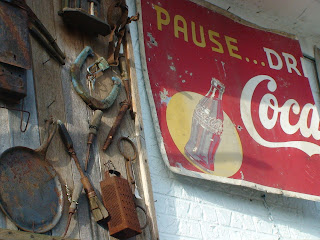 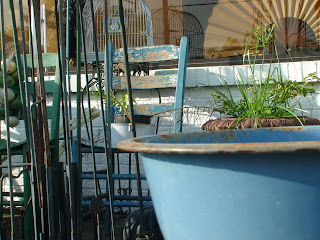 Me in front of the Hall of Brotherhood (below) 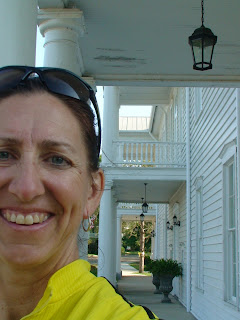