Menu
Menu
I was resting comfortably at 6 p.m. at a church Sunday in Cantwell, AK when a man came in and offered to take me home. It was Bob Hempstead. “You’ll be more comfortable at my house and my wife Jayne is making dinner; you’re welcome to join us.” 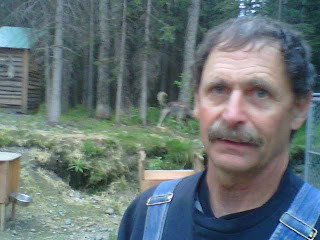 Bob Hempstead
Bob, 56, was an elder at the church; the pastor explained to me that Bob and his wife often adopted travelers. 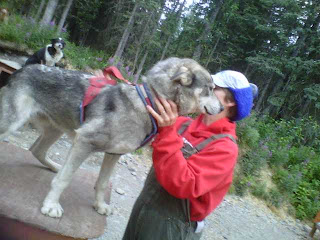 I had heard about Bob while in Fairbanks. Someone at Fred Meyer grocery mentioned I should look him up because he participated in the Iditarod sled-dog race.
“That was in 2000 and I came in 56th,” said Bob, acknowledging he finished toward the back of the pack. “Lack of sleep is probably the toughest part of the 1,049-mile race. You’re trying to sleep and people are stepping over you and talking.”
Bob, it turns out, had quite the Alaskan resume. He summitted Mount McKinley. “I made it to the top on my third try,” he said. The first expedition he was called back because of a family emergency. “The second time we ran out of food ,and this last time I made it. Actually, I’ve completed seven summits,” he said, having returned a couple weeks ago from summiting Mt. Everest in Nepal.
Bob was fit; a high-energy wood chopper kinda guy disguised behind a very mild-mannered demeanor. Unique to his summits – he did rope tricks when he got to the top.
Originally from Nebraska, Bob relocated while in the Army and stayed in Alaska. For the past 23 years he’s worked on the slope in Prudhoe Bay for BP as an instrument technician.
“So you race sled dogs, climb mountains, work for BP and run the vet clinic,” I asked referencing the sign, Cantwell VeterinaryService, at the entrance to the driveway.
“No, Jayne is the doctor – that’s her clinic,” said Bob.
Jayne was originally from West Virginia. She graduated from the University of Georgia, lived in Soldotna, Alaska but fell in love with Cantwell and built a home.
“I’m going to apologize for the size of our bathroom – when we were designing the home I didn’t realize it would be this big but I love it,” she said.
Jayne had short reddish hair and a homesteaders efficiency that was on display as she made dinner, got me settled, and contacted a friend so I’d have a place to stop for water and a rest the next day.
My comfortable upstairs bedroom was filled with books on Alaska and posters commemorating past Iditarod races. 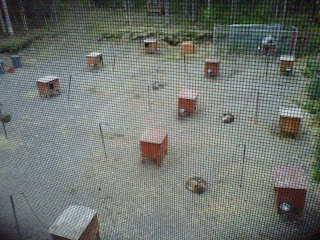 “Bob never wanted sled dogs,” said Jayne, standing in a perched yoga position with the sole of her right foot resting against her left knee . “He said it would be like having dairy cattle with the commitment and amount of work.”.
However, looking outside my bedroom window the lot in back was full of 13 dogs; huskies all chained to their individual raised sleeping quarters.
Home Sweet Home (nap time!) 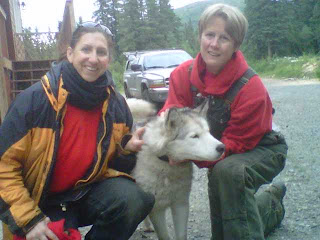 Luke was Jayne’s special dog. A hearty white-and-black husky that liked to nuzzle. (more below)
(Me, Luke and Jayne)
“If you’re up before me just hit the coffee button, and then, if you want, you can ride along while I run the dogs,” said Bob. 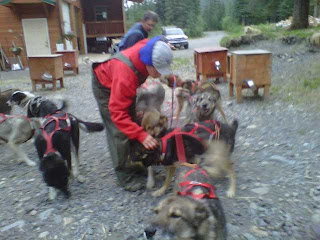 Early the next morning, dressed in insulated overalls, a winter jacket, knee-high rubber boots and a red knit hat, I watched Jayne and Bob perform a well-rehearsed dance getting nine dogs ready for their daily exercise. 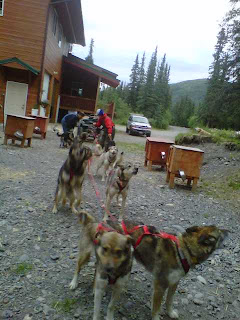 The two managed a cat’s cradle of ropes and harnesses, hitches and clasps. The dogs eagerly cooperated, answered to their names and showing their personalities… nudging, jumping and squirming to be picked as the lead. 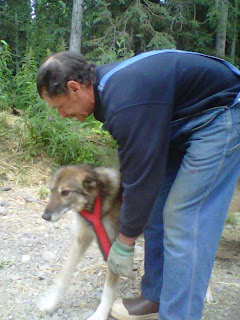 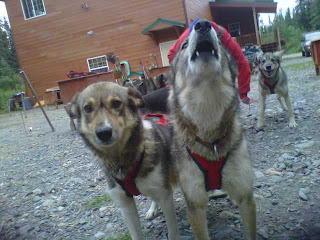 Howl = Let’s get going!
Jayne’s dog, Luke, stayed behind.
We climbed aboard an ATV, the dogs were already tugging and lunging at the line. Jayne fired up the engine and we were off down a rocky trail through the woods. The dogs were in their element. 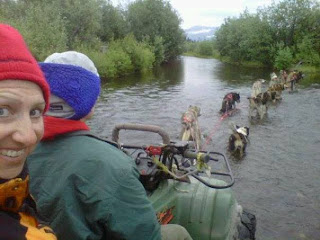 Loving it!
They pulled and ran and loved it; following a familiar 5-mile trail that led us over hills and through streams. Jayne killed the engine as the dogs laid down and lapped at the water.
“If we don’t stop, they’ll overheat,” she said adding, “This was the area where Sean Penn shot that movie “Into the Wild.“
Jayne said they had a replica of the Magic Bus just up the road. “Only a couple businesses really made out financially – many Alaskans didn’t actually like how the main character was framed because he just didn’t know enough to live through a winter in Alaska.”
We chatted a bit more about the movie and then I asked about Luke.
Jayne said she got a call one night from the State Troopers to come euthanize a dog that had been tied to the back bumper of a pickup with a yellow tow rope.
“The guy was drunk and I’m sure he just forgot he was back there,” she said.
“The guy never made it home; wrecked his pickup. The troopers said the dog had been dragged 17 miles.”
Jayne went to look at the animal but was adamant with the troopers. “I didn’t even want to see the owner,” she said, with a tone that still carried back to that horrible day.
“That poor dog. I drafted papers to put him down and had to wait a day before anyone got back to me. I couldn’t believe that dog was still alive the next day and I just thought – he’s tough, and he’s fighting to live so I’m going to help him.”
Jayne’s coworkers thought she was nuts. “He needed tons of medical attention. He was recovering for three months and in that time withered to just 35 pounds.”
Today, Luke is like a gentle giant. He has icy-blue eyes and can’t get close enough for Jayne’s affectionate pats and soothing words. 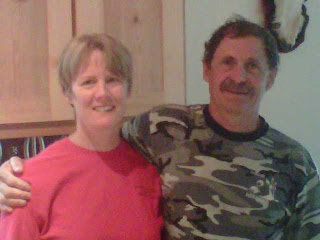 Upon our return, Bob helps untether the team and gives them food and water. Jayne quickly whips up breakfast which is when I learn she has her pilots license, has run a marathon, a triathlon, and run the Alaskan Seward Mountain Marathon eight times.
“That one makes you feel like a kid,”‘ said Jayne about the 4,600-foot climb overlooking Resurrection Bay. The “up” takes more than an hour; the descent is completed in 10 minutes.
Jayne also summitted mountains and she’s a familiar face each March caring for the dogs at the Iditarod.
We were just finishing breakfast at 7:34 a.m. when the dogs started howling. I sat up and took notice, but for Bob and Jayne it was a regular song, like the opening hymn at morning Mass. 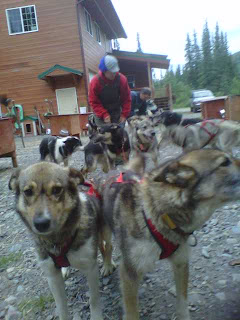