Menu
Menu
HOPE – Spent the day exploring history in Hope; locals say it is the oldest community in Alaska. Once a hot spot for gold miners with a population of 3,000 – now, it’s a tight town of 150 people – mostly retirees and small families where the men work 600 miles away ‘on the slopes’ (read oil) and come home every other week.
Enrollment at Hope School is 23 students grades K – 12. There are two teachers and the Class of 2013 consisted of two graduating seniors. Both stood at the podium at the same time and gave graduation speeches.
“If we dropped below 10 students, then we’d have to close the school,” said a woman volunteering at the gift shop next to the local library.
Gold Rush Peck
Most interesting bit of living history in Hope is a man by the name of Gold Rush Peck. “I’m 69 years old,” said Peck. 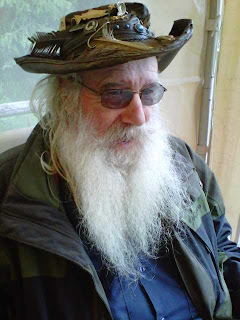 His given name is Peck Hassler; he’s been gold mining and panning since he was 10 years old. A stroke or two has left him with a severe speech impediment and hindered his balance.
He walks with a cane, wears rainbow suspenders, a jacket with an embroidered picture of himself on the back and he has a wicked cool leather hat filled with a couple ratty quills, some meaty fish hooks, pins of Alaska, turquoise jewelry, and a couple pins noting his service in Vietnam.
“This hat was willed to me by my friend Frank,” said Peck. “I know this hat is water repellent but that could be from all the sweat and stink.”
Peck was an iron worker in Chicago by trade but spent most of his life panning gold. “I couldn’t tell you how much I’ve found.” But then he points to a watch with 150 gold nuggets in the band.
“A jeweler in Juneau made me this watch,” said Peck, struggling with conversation. “I know what I want to say, but I can’t say it.” 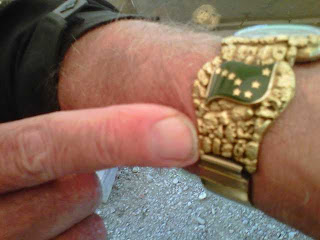 He grins; it’s a look that says he appreciates small pleasures. I ask how that makes him feel. “I’m in no pain,” said Peck. “I walk a little tippy but I’m okay.”
Locals say Peck captured his 15 minutes of fame when the Discovery Channel came to town and did a piece on him.
He kindly asks me to put a stick pin in his world map to mark where I’m from. Then he digs into a metal trailer and pulls out a postcard of himself. The pastel portrait completed by artist Erica Miller in 2001.
I ask Peck to autograph it and he said his signature is stamped on front. In blurred black ink it read, Gold Rush Peck.